As Mik's first holiday season living in the D.C. area, I told him we have to check out several things. The train display at Union Station is the one we decided to do first; because I the Botanic Gardens has more to see and seeing this one after would be kind of anticlimactic. 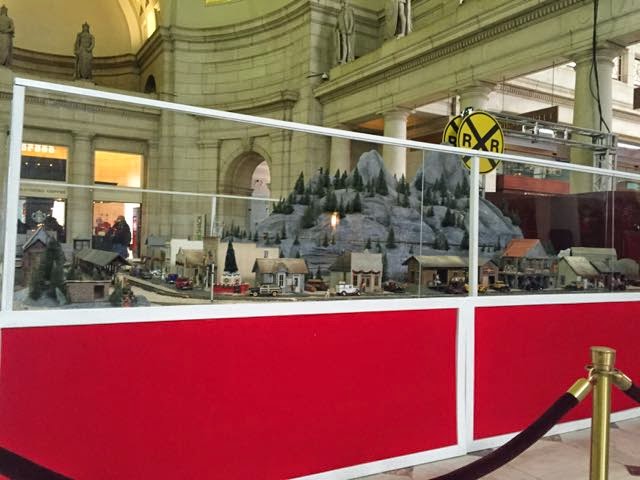 Unfortunately, despite the website saying the train display starts today it was not running, yet. You could look at the display; but still disappointing to not have the train to watch. 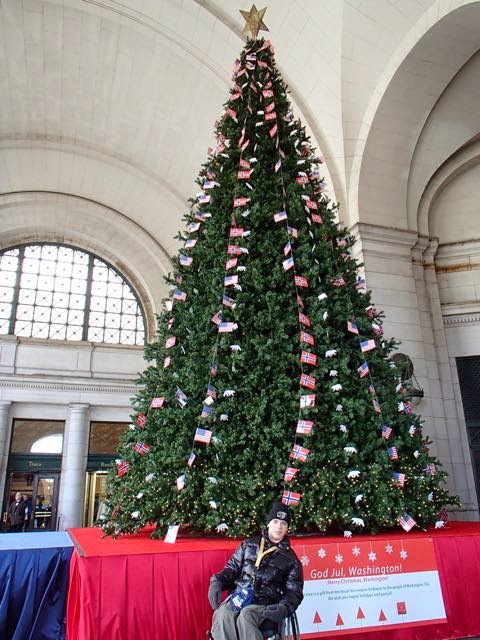 We did at least stop and see the Norwegian Christmas tree right outside the entrance and Mik was even a good sport about posing in front  of it for a holiday photo of him.

Also, we discovered that Union Station is definitely a Metro stop to avoid when using the power chair, which thankfully was not the chair he decided to use today. Not that he hasn't run over my feet navigating the Metro before; but the awkward elevator from the Metro entrance into Union Station would guarantee my feet getting run over and/or him being totally unable to navigate out of the elevator. Basically it's one of the smallest Metro station elevators we have been in and on top of that you enter on one side and the exit door is on the adjacent wall. Thus, there is little room for turning and you cannot just do a back in or back out maneuver that you can do in small elevators with just one door.

Today we visited Great Falls Park as a family as a fall colors outing. Fall colors wise it was disappointing as it was kind of too late for most of that for that area, which we did not expect because in our area of Alexandria this week it only just started to seem like it was really peaking. However, it was still good fall weather and a fun place to check out. Of course, getting some National Park stamps is always a plus, too

We did the part of the Patowmack Canal trail from the Visitor Center past the three overlooks. The first overlook is not accessible, but the other two are. The second one has a ramp next to the stairs and the third is on same level as trail. 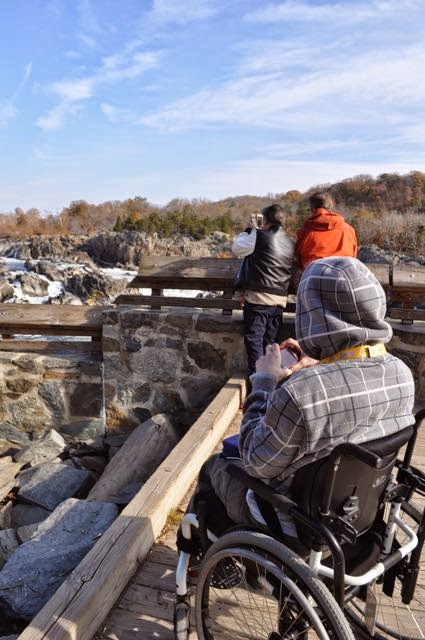 The second overlook was a little hard for Mik to view the falls from due to the wood railings. On the north part there is an area that goes down from the main viewing area and by putting Mik several yards back from the railing and facing that way he could see the falls. 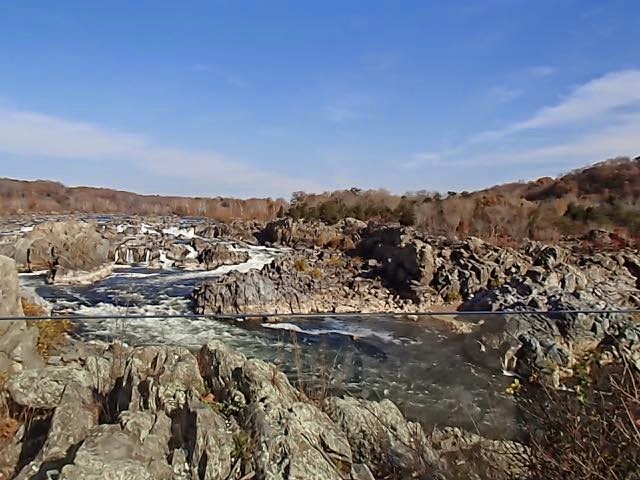 The third overlook was the best view for Mik, as part of the lower viewing area has a clear railing section similar to what we've seen at ballparks.

After the last overlook we decided to return to Visitor Center and car as Mik's feet were cold. We crossed over at the picnic area to take the Old Carriage Road trail back to the Visitor Center for some different scenery. (Yeah, we really need to get him some real winter boots, as that's twice this week he has been less adventurous due to cold feet and it's not even winter, yet). 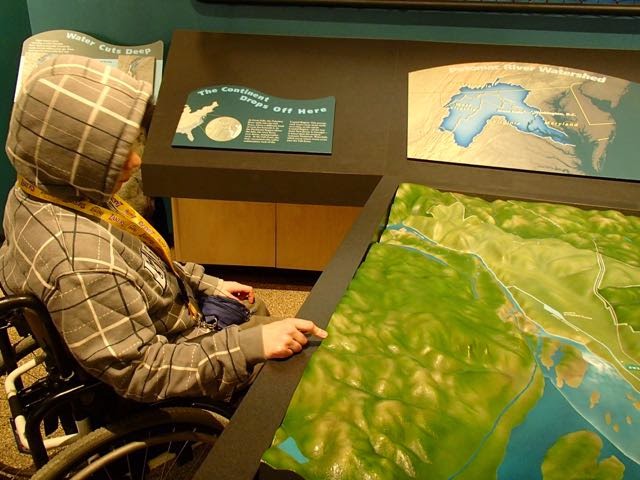 Mik enjoyed the exhibits in the Visitor Center, especially the 3D model map of the falls area. There are also exhibits about the areas history including Native Americans, the American Revolution, and tourism.

Check out the Hiking part of the park's website here for good details on the wheelchair accessibility difficulty levels of the trails. 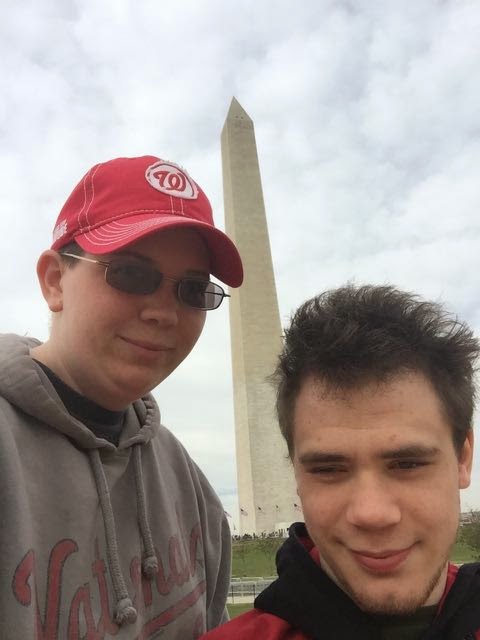 For years we have been wanting to go up the Washington Monument again. First it was under renovation and then it had to be repaired after the 2011 earthquake. Now for months it has been reopened and we finally got settled in enough to make plans to go see it, which seems to require about a week to ten days in advance when you look at next available when reserving tickets online rather than getting them day of and risk having to wait a long for your tour time.

Our tour time was 11:30. They have benches and signs pointing which one to sit on as a line for your tour time. They only let people go in as people come out; so the tour time doesn't really mean when you will get in. For example, they didn't even start with the 11:30 ticket holders until 11:45. It isn't bad and they have a good system with the benches compared; but Mik wished he had worn warmer clothes, especially shoes, since it was windy and colder than he expected sitting up by the Monument.

To go in with a wheelchair one of the rangers has to unlock a gate so you go in the exit. The entrance looks accessible; but it is a security checkpoint, so they have you go in the exit to be screened by the end of the security. 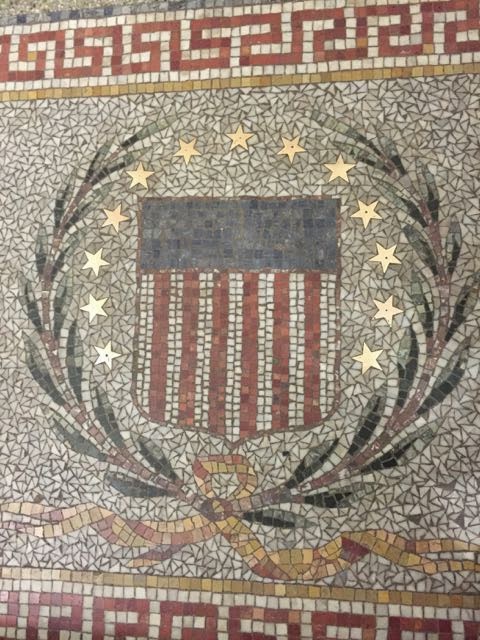 Once done with security you get in line to go up the elevator. This is one of the coolest parts of the monument in our opinion, as the floor has interesting mosaics. 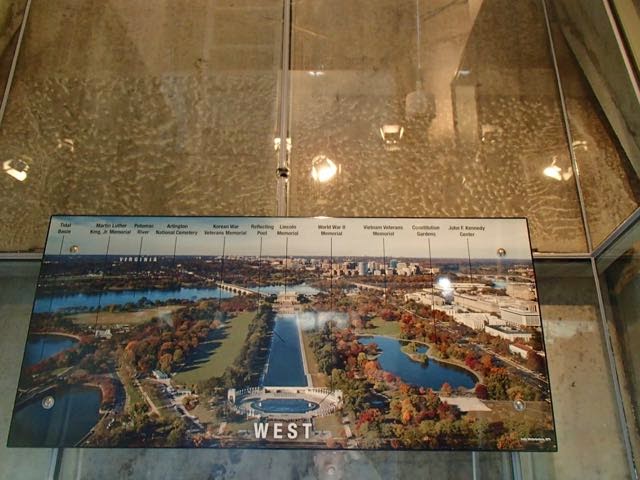 At the top there are windows looking out from the North, East, South, and West. However, they were too high for Mik to see from his wheelchair. We actually knew this was an issue as we did the tour back in 2006. However, that time they had this periscope thing and Mik was able to see some stuff. It wasn't perfect as the lens were somewhat scratched up; but it was more fun than just seeing the photos above the windows that show the view. 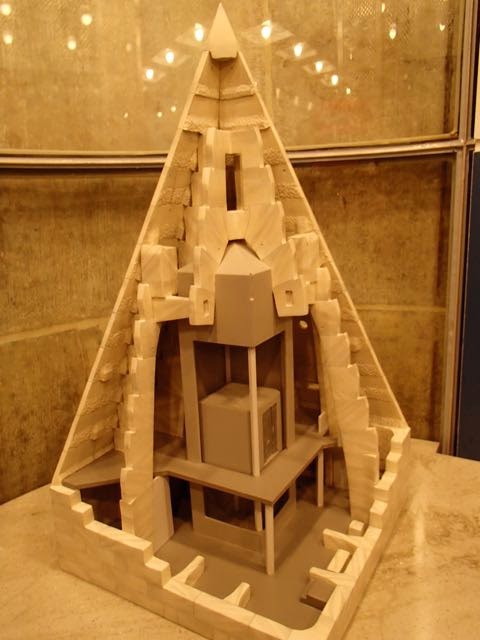 After you are done at the observation level those that can't do stairs wait for the elevator to return with a new group and then ride down to the museum level. This level has a few interesting displays mostly about the building and repair work of the monument. This level is where you get in line to ride the elevator back down.

The ride down is interesting if you can get close enough to the doors, as at two points the lights in the elevator darken and the lights in the shaft allow you to see some of the stones donated by various states and groups. Unfortunately, we got stuck dead in the middle of the elevator and couldn't really see them. 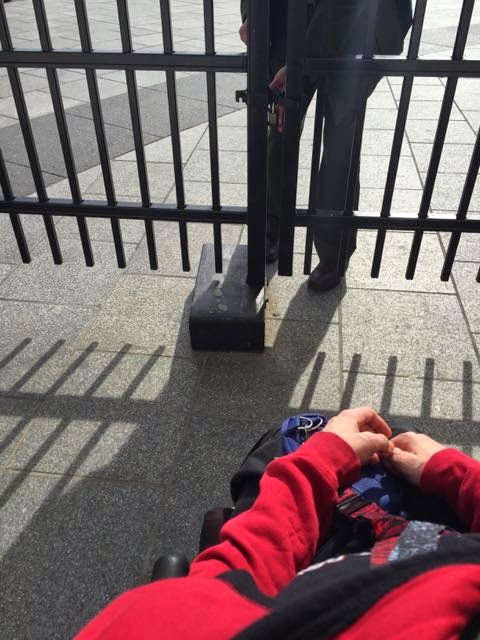 At the end we exited the same place we came in with the wheelchair. For most people, you then exit through a turnstile; but we had to get back through the locked gate. The park ranger wasn't paying attention and I was about to go out the turnstile to ask him to open the gate when a security guard brought it to his attention that we were waiting to get out. I get the security aspect of locking it and it was a minor inconvenience; but it is also the only fire exit and seems like that gate shouldn't have a lock during operating hours.

And, of course, we also stopped at the Washington Monument Bookstore for a National Park stamp. We just got the monument one, since we have the rest and didn't go to any other memorials/monuments today. Since Mik remembers hating the close quarters inside, he stayed outside; but actually there was only one other person in there and he could've gone through it easily if he had wanted to.

Overall not a bad outing; but Mik was rather disappointed. He doesn't really remember the other time we took him to the top of the monument; but I have been telling him about the periscope and he has been looking forward to doing it again for years. Not being able to enjoy the view even through a crappy periscope was a major disappointment for him.