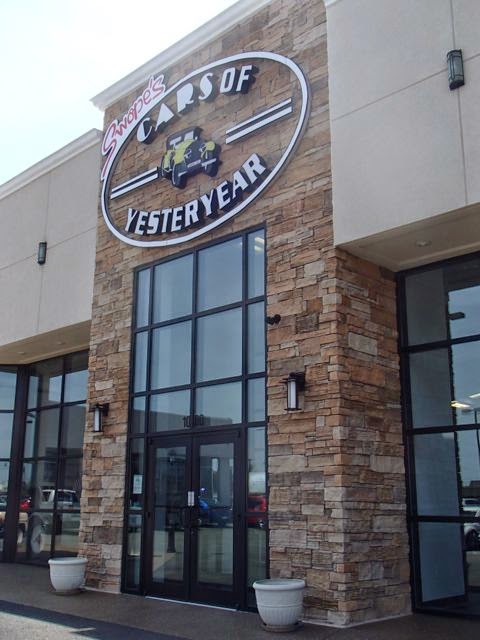 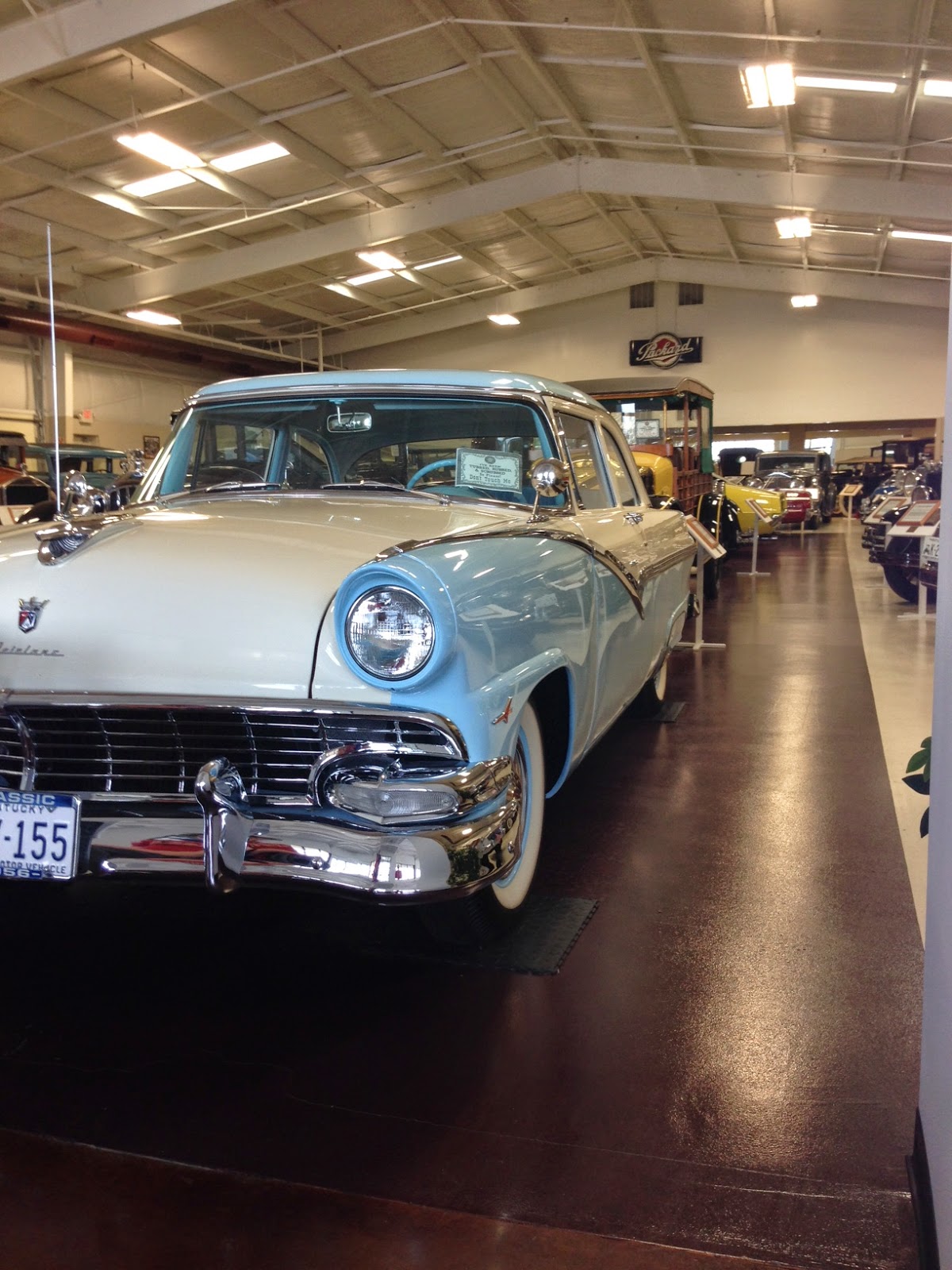 Having gone to school in D.C. a semester, living in Arlington for almost a year, and Mom traveling to D.C. for work frequently, we have been to the Reagan Airport with Mik almost yearly over the past decade.  Until this trip, though, we had always flown American for our D.C. trips.  Now that we live in Huntsville we would have had to fly to Dallas to get to D.C. on American and that was much more expensive than taking the direct flight on U.S. Airways, which at least now also gets us American miles so seems a win-win.

What I did not realize until I checked in the day before the trip was they only fly little planes between Huntsville and pretty much everywhere on U.S. Airways and American (only to/from Dallas uses big planes, but even then not every flight).  Mik absolutely hates the little planes and as much as he also hates Southwest he preferred that over the American Eagle flight between Tucson and LA.  We even tried to fly through Alaska to get home from Hawaii a few years back to avoid LA and were quite annoyed that they then changed our flights to go through LA shortly before our trip.

Mik's problem is the aisle chairs do not work well on the little planes, but since they are hard to avoid living in Huntsville Mik has gotten used to having to just sit in bulkhead.  Landing at Reagan and hearing the flight attendant say a shuttle was meeting the plane put him right back at hating little planes.  It was mostly the unexpected experience of suddenly hearing about stairs and him not being able to see that a ramp was waiting to be brought up to the plane, but it was also about him hating buses. 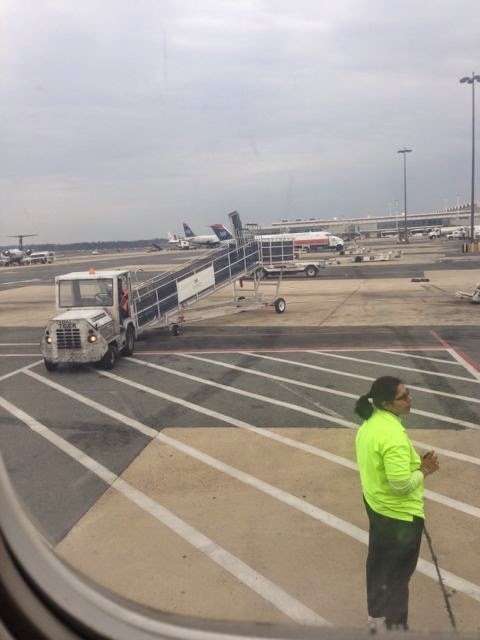 Mom was waiting in the terminal for us having not been able to get home the day before and travel with us as usual and her reply to me telling her Mik was freaking out about a shuttle bus was something like yeah they usually do that here.  That made Mik even more annoyed because he totally could have been mentally prepared. 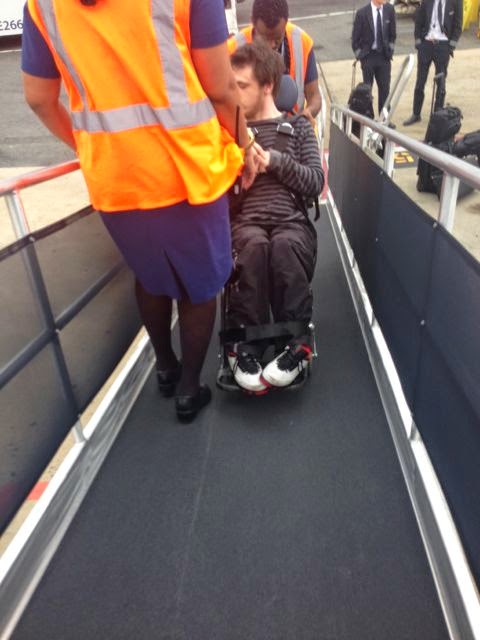 Despite the shuttle bus, overall the experience at Reagan Airport was actually very good.  For one, their aisle chair is the more common one than the one in Huntsville and it actually fits in the aisle.  Mik also likes that there is a companion bathroom located right inside security in each terminal (or at least the two of three we have been in and assume the other is identical since those two are).  The little corral for those needing to pre-board was slightly annoying in that it was crowded, but it did serve a good purpose in that they were very helpful in making sure those that needed help got it including informing us that our flight was moved to boarding upstairs at the actual terminal and offering to help going there. 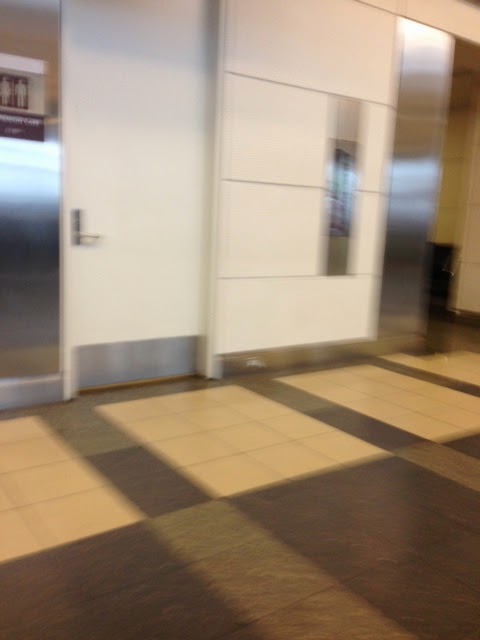 This was Mik's third or fourth time flying out of Huntsville in the year and a half since we knew we were relocating here and have lived here, but it was the first time we really spent time in the terminal because we arrived hours earlier than normal since Dad had to drop us off on his way to work.  It quickly has gone from being one of our favorite airports to our least favorite. 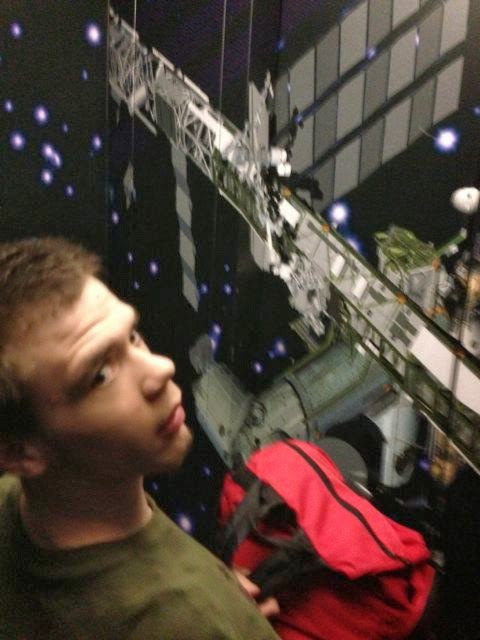 First off, the first time we arrived in Hunstville and rode the elevator from the gate level to the security entrance/exit level we were impressed.  In fact, it is Mik's second favorite elevator with the only better one being the Warning Walls Will Move ones you go on for the accessible route to go on Indiana Jones at Disneyland.  After our experience this past week, though, the airport has annoyed him to the point he feels he cannot even call it his second favorite elevator, although he cannot name any specific elevator to replace it on the list of only two favorite elevators, so it's now in last while still actually being second.

What made our opinion of the Huntsville Airport go to the worst airport experience ever is the fact that there is not a companion bathroom in the terminal.  Now that doesn't seem like a totally horrible thing, but when we returned from our D23 Expo trip in August I know I took him to a companion restroom outside security before exiting to where Dad was waiting in the pick up area (very nice set up by the way!).  It is inconvenient that they totally have one in the airport, but it would have required going through security again, which is a bigger hassle for someone in a wheelchair than most others.  We did not have time to go through that and I went into the women's room to go myself and found that they also do not even have handicap stalls big enough to fit a wheelchair and a companion.  In fact, they seem like they may not even big enough for someone in a wheelchair that does not need a companion to help them.


Thus, as much as we love the one elevator. We now totally hate the airport.  It also does not help that the other elevator from the security level to the pick up/drop off/baggage claim level is barely big enough when two of us travel with Mik.  Additionally, the aisle chairs are not that great including not even fitting to be next to the bulkhead row in the little planes, which is mostly what at least American and US Airways fly to/from Huntsville (we mainly have flown the larger American planes to DFW, so didn't even realize the aisle chair issue until this trip to DC).  Sure, even the nicest aisle chairs do not work well on the small planes, which is why Mik hates flying them, but at least those fit in the aisle and it is the turning to get on/off that is an issue.

Bottom line is Mik was glad to not realize the airport was so bad until this trip because this trip was our first condo hunting trip to DC.  The whole little plane experience even lead to Mom joke maybe we should just rent a place now and not go home, but more on that in another post because that is more about the D.C. airport.