Our plan for the day had been to start with Soarin', but even getting to the park right after it opened still meant an almost 3 hour line. We decided we much prefer to do the little to no line wait for Nemo and Living with the Land before World Showcase opened. Apparently, everyone was already at Soarin' because it was a rainy day and mostly the crowd level was low and for once we actually didn't have to wait in line to use the elevator in the Future World building.

I don't know if it's normal or just because the ride was pretty much walk on at the time, but we were directed to the Fastpass line to go on the ride. 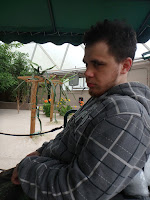 Mik really loves the Living with the Land ride. For one, it is the one nice boat ride at Walt Disney World since the wheelchair part of the boat is level with the loading area rather than you going in to boat and then roll down to the lower area like on the ride in Mexico and 'it's a small world.' Also, the experience is a little bit different every visit because what they're growing and researching changes every so often. This time of year with the holiday decorations up it was even more interesting because there were things like the rosemary decorated like a Christmas tree. 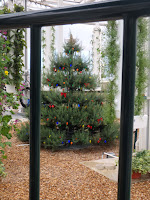 Destination Info:
Epcot - Living with the Land
Lake Buena Vista, FL
Posted by wildcat1001 at 7:04 AM