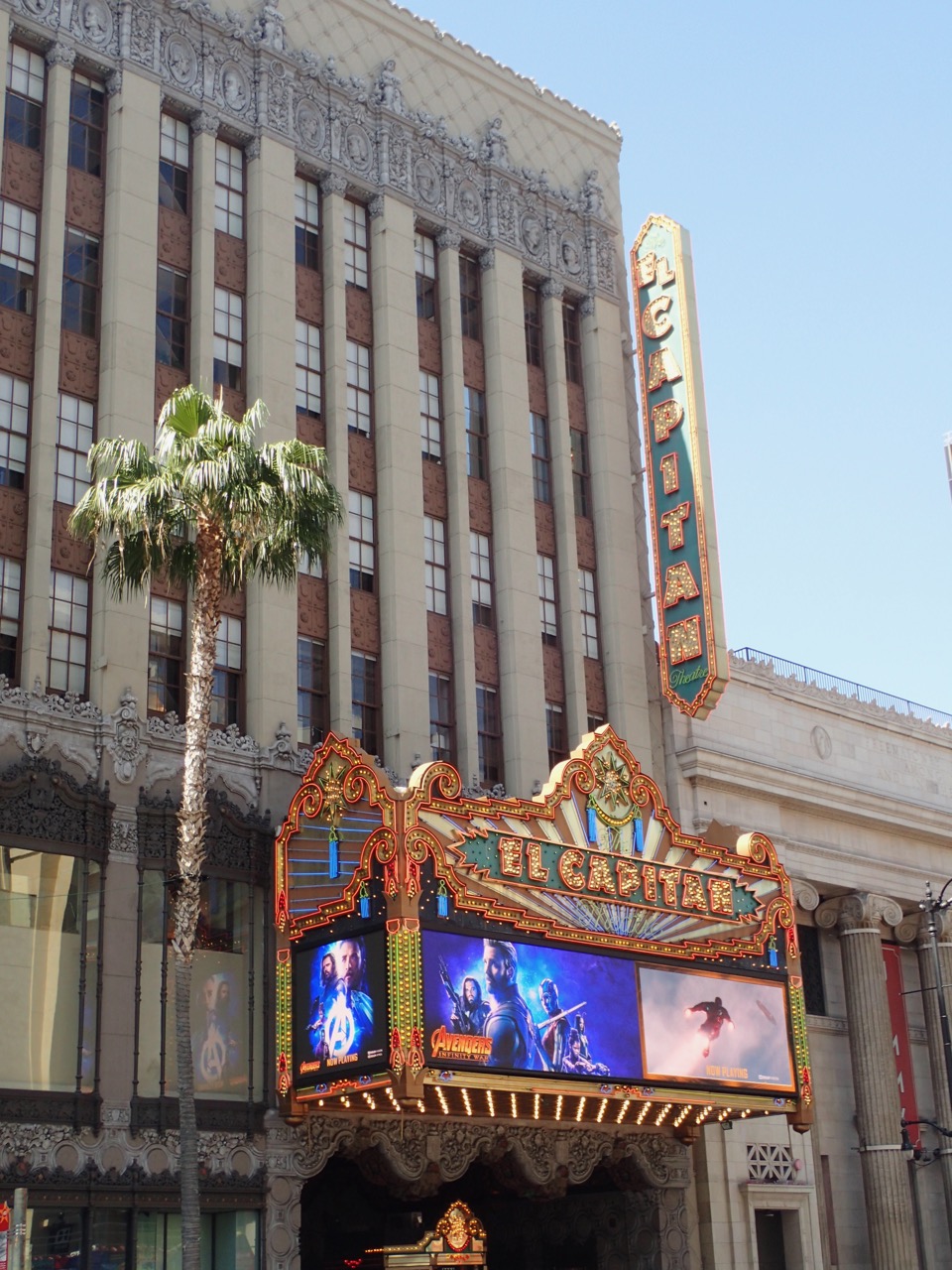 I've wanted to see a movie at El Capitan for awhile and we even planned to see one (I think I even bought tickets) back when we used to have Disneyland annual passes and visited several times a year, but instead decided to do an extra day at Disneyland. This year we decided to finally just do Hollywood (and maybe also Disneyland later as its own trip) and, in particular, finally see a movie at El Capitan. Mik wasn't sure he'd go for just whatever was currently playing, but it worked out that we planned our trip while a movie (Avengers: Infinity War) he was actually going to see in the theater anyways was playing. 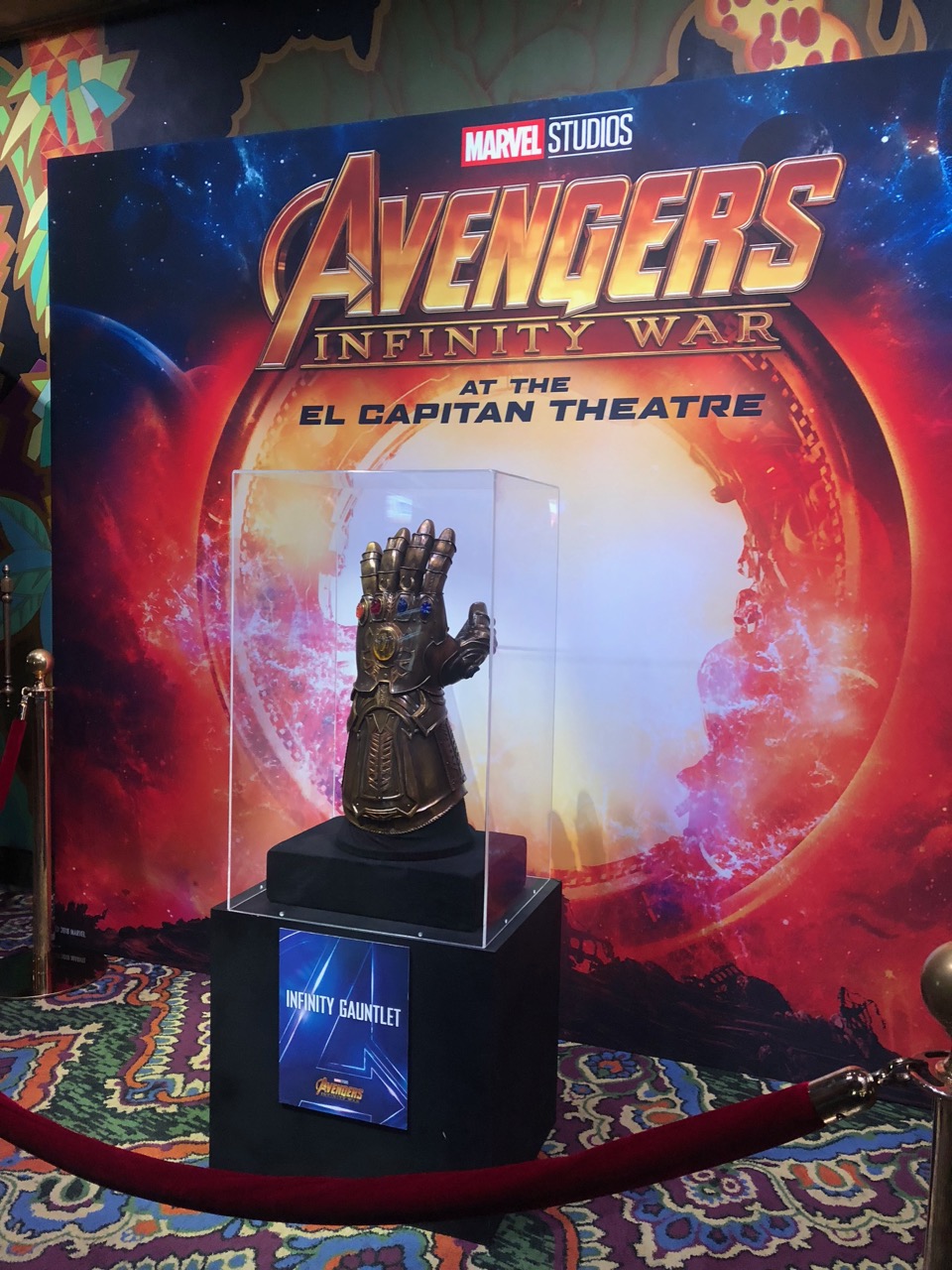 Mik really enjoyed how there were props and costumes from the movie to set the atmosphere including the Infinity Gauntlet in the lobby by the concession stand and costumes on the balcony in the theatre. 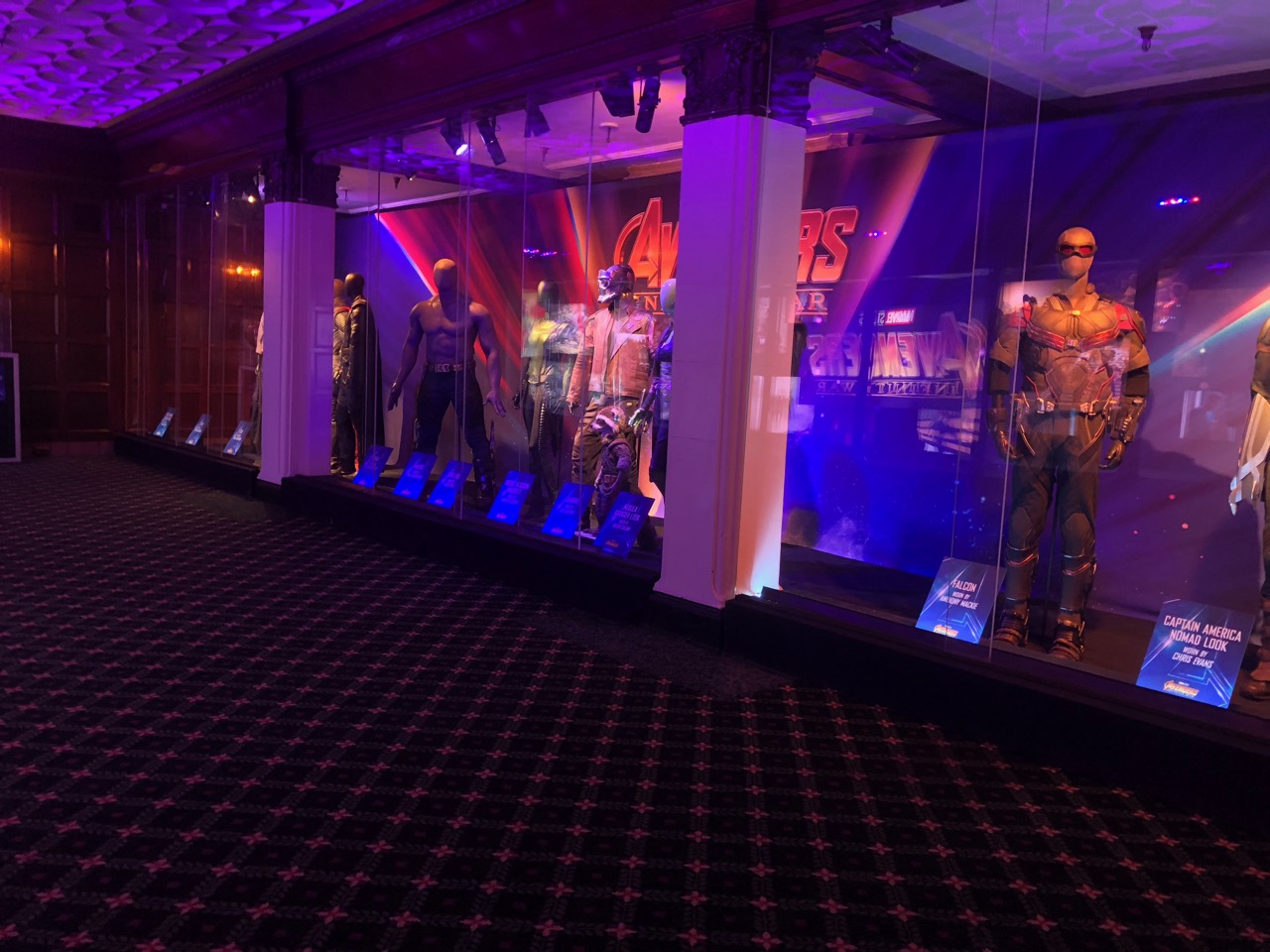 However, there were even more in a small exhibit downstairs by the bathrooms that he missed out on because I'm pretty sure there's no elevator down to it. 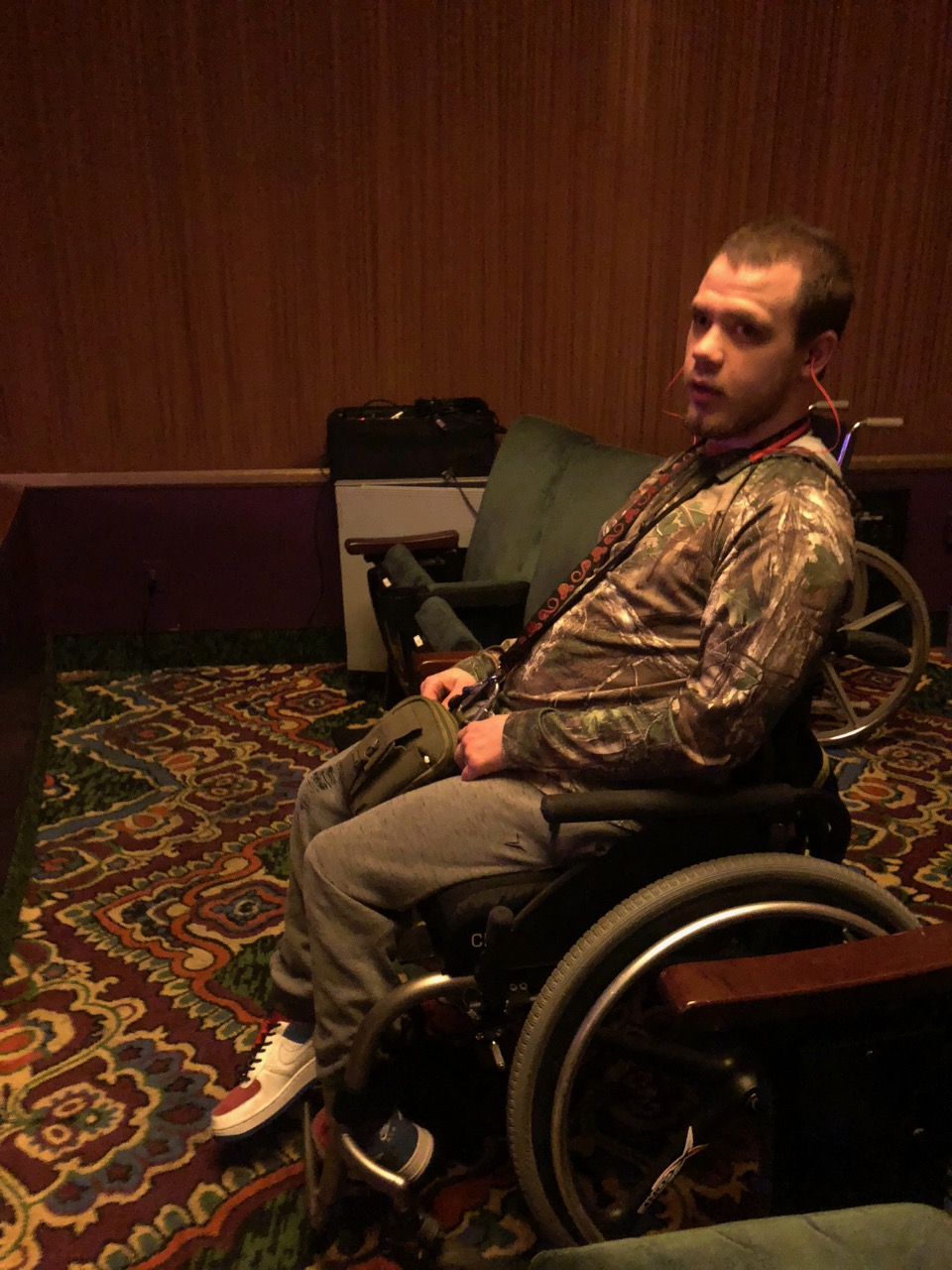 The wheelchair seating was somewhat disappointing. The fact there are only two areas in the back isn't bad considering it's an old theatre. However, online when you select seats it makes it seem like there are spots for two wheelchairs with one companion each per area. However, in reality, there are four seats in each area and only enough room for one wheelchair to go in between the two sets of seats. The seats can be moved, so I guess you could put more than one wheelchair, but then the companions wouldn't necessarily be able to sit next to them. Also, Mik didn't like that the seats are not in the middle of the theatre, but really the view was just fine. 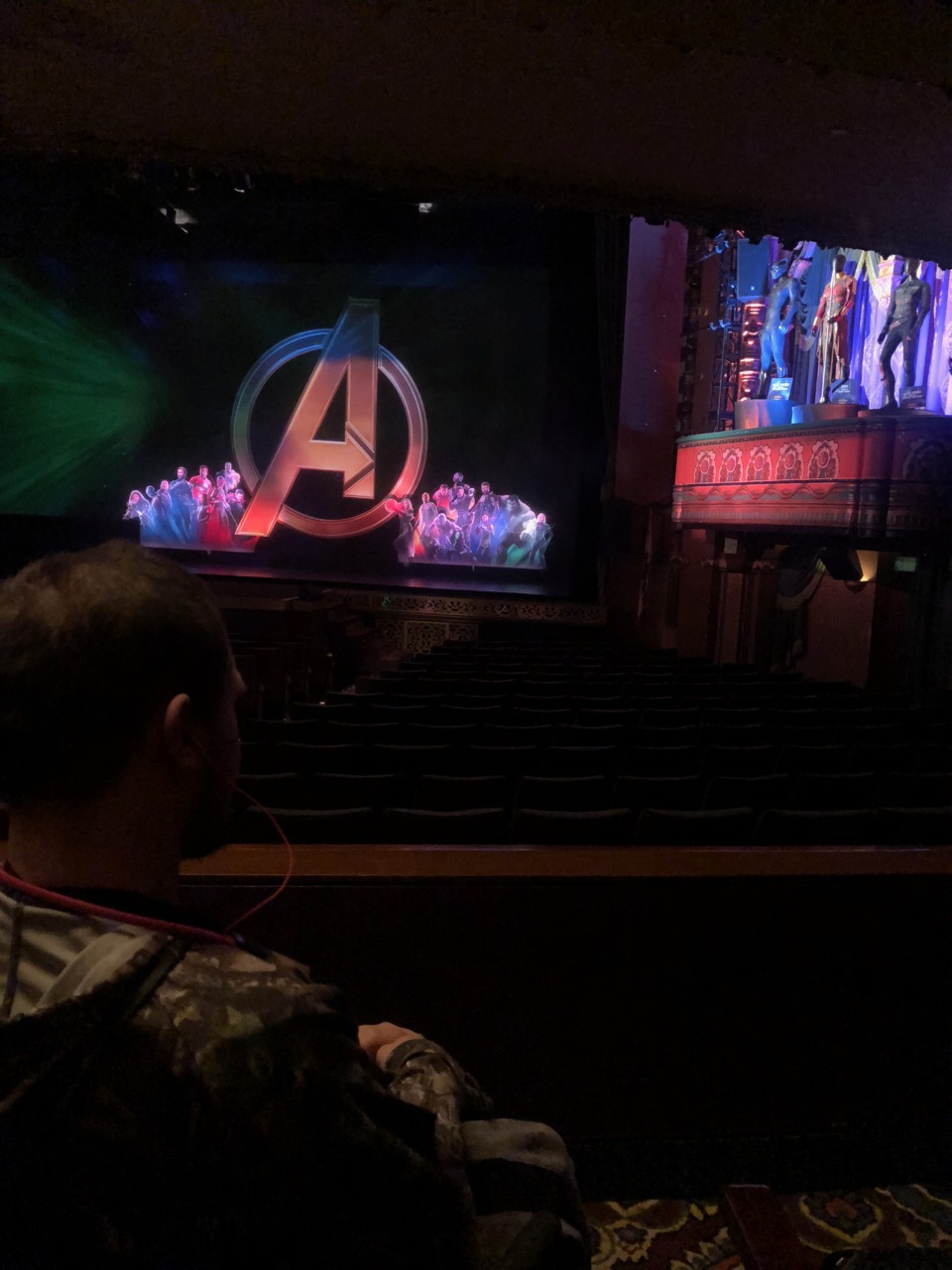 I purchased the VIP tickets, which were only $10 more and included popcorn in a souvenir bucket and a bottled soda. Mik says next time he would just buy the ticket and food separately. Not that it's a bad deal, but the concession stand has other things he would've gotten instead if we hadn't done the VIP tickets, especially since he ended up not really liking the popcorn.

Overall we enjoyed the experience of seeing a movie at the El Capitan Theatre. If we ever did do Hollywood again, which we really don't think we will as it seems like a do it once kind of thing, we probably would only do this theatre again if it was something Mik was really into seeing as he doesn't think he would've enjoyed the experience at all if it hadn't been a movie he was really interested in.