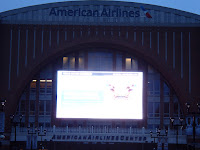 Mik and Mom talk about going to a basketball game at a new arena every season to make progress towards having seen a game at every one, but in the past 5 years they still have only been to the Phoenix Suns and the Washington Wizards (this one at least was before it was our local team). As part of our current plan as we go road trip, we decided to finally try to see a game.

We originally tried to see the Memphis Grizzlies, but we couldn't get accessible seats. This has frequently been an issue and actually the biggest reason why their plans to get to more arenas haven't happened. We know in the case of the Suns it was often about getting to the right department that sold them and the Wizards we just have always bought the tickets at the box office. Thus, we considered just going to the Memphis box office to ensure they really didn't have any accessible tickets available. Then I realized we were near Dallas and was able to actually buy tickets on Ticketmaster.

Since Mom isn't exactly allowed to take the truck into parking garages (and Mom had Hyatt points for a free night), we walked to the American Airlines Center from the nearby Hyatt House. This ended up working out okay, but there is a lot of construction going on making it difficult to find an accessible route. There is a point we had to cross and the other side doesn't have a ramp, but at least this road is set up for entering the parking garage around game time making the traffic not an issue. The people directing parking were also willing to stop the traffic to let us just walk in the street until we got to the ramp at the next block. 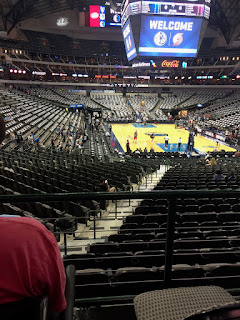 We sat in Section 101. I had purchased two tickets for the wheelchair row and one in the row in front, but since they have a chair for each spot and plenty of room behind the row of chairs the usher said I could just sit behind Mik if I wanted. Mik liked that it was the level we entered and we didn't have to find an elevator. He also like the view of the game from this level. 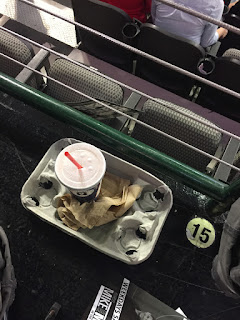 Overall Mik enjoyed watching the game at American Airlines Center. However, it was a little loud for his liking. Also, it failed the cup holder test. The rows in front have them. Even the folding chairs in the wheelchair row have them, but when you move it out of the way for a wheelchair to roll into the spot the cup holder goes away.