Normally I wouldn't do a post for a hotel when we did not have an accessible room, but we were supposed to. Not only did I make a reservation for an accessible room, but I actually made the reservation before I was able to buy tickets to the Blake Shelton concert because I wanted to ensure we had an accessible room if I could get accessible seats. We didn't get wheelchair accessible seats at the venue and that was our accessibility concern of the trip, but it turned out fine compared to the hotel, which has always been the least concern for us when traveling.
Around 11am on check in day, the Hilton app sent me a notification to check in, which I proceeded to do. At that time it not only showed me I had a reservation for an accessible room, but when I completed check in it had assigned me a room and sent me an email that my digital key was processing. I was actually initially impressed with the online check in because it has an option to tell them that there is a person in the room that may require assistance if there is an emergency evacuation of the hotel.
Around 1pm, I got an alert from the app that we had been assigned to another room and our digital key was ready. I assumed it was just a different accessible room that had become ready earlier even though I selected estimated arrival time of 5pm. However, I did start to be concerned because the app no longer showed anywhere that it was accessible, but I wasn't sure if it had after I completed the check in and was assigned the other room either.
When we finally got to the hotel at 6:15pm after unexpected traffic delays, we proceeded straight to the room to discover it was not accessible at all. My cousin went down to the desk to try to get us reassigned, but they had no available accessible rooms at this point, which is not surprising. We then had to waste more time trying to prove that I not only had reserved an accessible room, but had been assigned one.
While the guy at the front desk was helpful and tried to figure out why some rooms were out of service, he also tried to convince us that our room was not guaranteed because we had not paid for the room until we checked in and we could not have checked in that early. While I understand that some room requests are not guaranteed until paid, I specifically had made a reservation for an accessible room and per my understanding of ADA law that room has to be set aside when I make the reservation and cannot be given away like it was. It is further annoying that it was given to someone else after the app assigned me the room and I had done everything I could to check in except actually access the room.
We requested a refund and he said he couldn't do that. All he could do was put a note in the system. We also requested to have the manager call us. We never received a refund nor further contact from Hilton. I also provided feedback in the Hilton app when it asked me and via the e-mail survey and never received a response there either despite asking to be contacted. I know we could have probably tried harder to contact them and complain, but they already almost ruined that night and wasted so much of our time. I decided to just report it to the DOJ in case there is a pattern to be investigated and be done with Hilton (except a few locations we have previously enjoyed).
I have long avoided Hilton just because there website has always annoyed me and I found I had to constantly go back and forth to find a hotel that actually had an accessible room to book despite filtering by accessible rooms when searching for reservations. In the last few years, the website has gotten better, but I'd rather go with Best Western that seems to not have online booking for ADA rooms at many locations like it should allow but at least they have never failed to provided it when we are able to book an ADA room online. 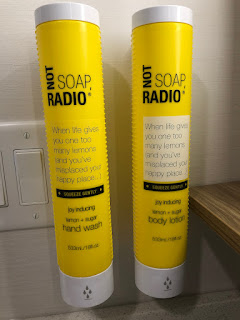 And this one feature of the toiletries in the room was so not joy inducing... Also, darn hard to use for someone with grip strength issues, so wonder how well that works if those are in the ADA rooms, too, because even kids (and me) could barely use the soap.
Months later we did end up with a check for a full refund, but the customer service to even get that was barely worth the effort and not satisfactory considering this type of situation should be punitive compensation and not just a refund. However, I did accidentally find I filled out a survey about the situation for the other Hilton we had stayed at without Mik earlier in the week and I will say that manager actually responded and cared that his location may have done something wrong (made sure to respond and let him know it was my mistake on survey and told him that his location had actually been awesome for us that stay), so I guess I am willing to try some other locations, but Hilton as a brand remains a choice we  most likely will only consider when using Mom or Dad's points and only pay to stay at the few locations we have had good experiences at (DC Wharf has always been great customer service wise and a go to even with the crap toilet seats Mik is always knocking off).
Destination Info:
Tru by Hilton North Charleston Airport
3331 W Montague Avenue
North Charleston, SC 29418
Posted by wildcat1001 at 3:02 PM