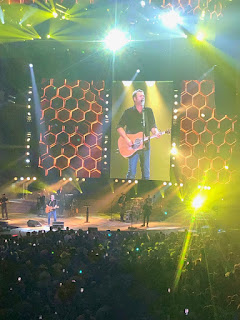 When the tour stops for the Blake Shelton Friends and Heroes 2021 were announced, I went back and forth on getting tickets for DC or the stop nearest where we now live. In the end, I'm glad we picked close to home as not only was the DC stop cancelled, but this gave us a good chance to try out the venue when it was an artist we knew Mik enjoyed.

Same as last time I attempted to get wheelchair tickets when presale started. Again, I didn't mind that they didn't go on sale (and was pleased that this venue does sell them online when they do release them). This time, though, I did find ADA semi-ambulatory seats I could buy during the presale. We decided to deal with transferring Mik instead of trying for wheelchair seats later and risk getting nothing. In particular, the venue is also old and the wheelchair sections are mostly like the view we didn't really like at Royal Farms Arena and the semi-ambulatory ones at least meant getting a closer to straight on view of the stage. Also, this time there were four of us and I didn't want to take that many spots in the wheelchair section if they even let me buy that tickets or end up having to split up, which we lucked out not having to do at Royal Farms when it was just three of us. 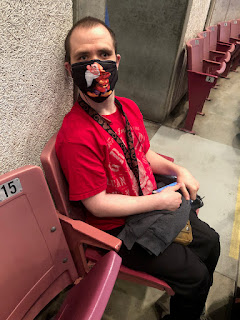 Our seats were in Section 116 Row K. This section and the one next to it have the top two rows designated as semi-ambulatory. The way it is shown on the seat layout map I wasn't sure which row would be the one with less steps for a transfer and kind of thought the row in front looked easiest. I ultimately ended up with K just because that was the last option to get the seat on the end of the row. Turned out to be the right choice as this row you can roll the chair right up to and was an easy transfer for us to do. 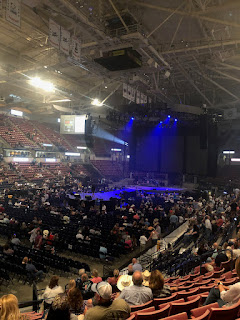 Main downside to the semi-ambulatory versus actual wheelchair seating is that you easily get your view blocked by the people standing up in front of you. Mik and I were lucky because the two people in front of us were unable to stand much and sat the whole show. The rest of the people in both rows on both sides, though, were standing like much of the rest of the arena for the whole show. When Blake came on and everyone stood up, Nora was sad because she no longer could see, but she ended up being able to stand on her seat with Kirsten putting her leg on it to make sure it stayed down. 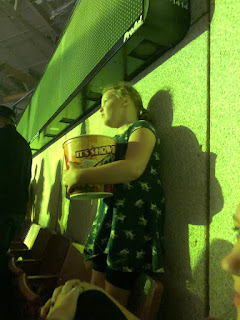 Last year we were supposed to take Nora to her first concert (Rascal Flatts in DC area) and Kirsten had been playing her the music so she would know it. This time after so many things being cancelled over the past year and a half, we didn't tell her and she didn't even know who Blake was until Kirsten remembered she had seen The Voice and knew him as the guy that does the finger thing. Thus, I wasn't sure what she would think not knowing the music, but she was totally into it as soon as Lindsay Ell came out. However, she was like, "This isn't country." Then Blake come out and she said, "Now this is country." By the end, she was dancing and singing along as she quickly picked up the choruses. She was also making sure we all got our phones out with the lights on and sang when the artists would have the crowd sing the parts back to them. 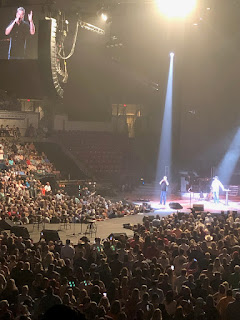 Overall we really enjoyed the concert. Nora and I were most sad that we ended up having to leave just as they were getting ready to all come out and play, though, because Mik's butt hurt since traffic was bad and he didn't get a chance to have a break from sitting at the hotel before as we had expected. Also, we still had to try to further deal with the hotel having given away our accessible room reservation before the shift change at 11pm (going back to hating Hilton...). It was also much more pleasant to get out of there early and not wait for elevator or try to get Mik back in his chair as everyone exited, although it seemed the usher was ready to get it and block traffic from getting in our way of transferring him back in it.