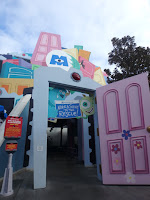 I don't think we've been on this ride in at least five years (or at least not since we started this blog in 2011). I always ask Mik if he wants to go on it since it seems the only things we ever do in California Adventure is Toy Story Mania and the Pop Cone in Cars Land. Toy Story Mania was down that morning and he was still not really interested in going on Monsters, Inc until I double checked that we in fact never had done a review. 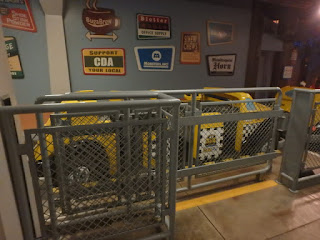 When you get to the front of the line they direct you to the wheelchair loading/unloading area which is just to the left of the regular boarding area. We then had to wait a few minutes for the wheelchair accessible taxi to come around. 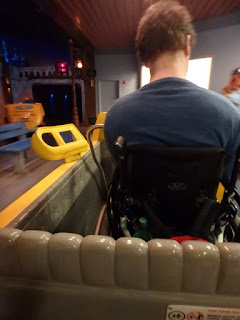 They have you roll in backwards and then turn to face forward and roll back against the row divider. A block is then put in front of the back wheels for safety. I think there is then a lap bar that comes down. I don't really remember, but it looks like there is one in the picture.

After the ride, Mik reconfirmed that the reason he doesn't like the ride has nothing to do with the accessibility. In fact, he said it's one of the best "wave" vehicles. He just doesn't really like the ride as it is not as good as the classic dark rides or the newer ones like The Little Mermaid. It also makes him really wish they'd renovate some classics to have wave vehicles.

Probably won't get him to go on it again anytime soon, but at least it was useful to kill some time when Toy Story Mania was down and he was trying to stay in the parks until places were open for lunch.