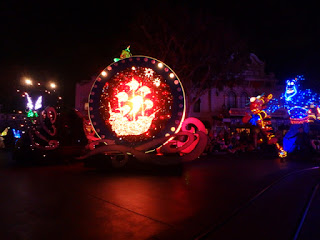 We kept putting off see the Paint the Night parade the last two trips because we knew we still had another trip. This being our last Disneyland trip until probably the next D23 Expo, I insisted that we make sure to watch the parade this time. I know Mik usually doesn't like parades, but I remember him really enjoying when the  Electrical Parade was at California Adventure. Thus, I wouldn't let him talk me into seeing it by myself.

We knew we'd be in the parks at night the day we're doing the Halloween Party, but we wanted to enjoy the Halloween stuff instead, so we picked one of the few nights there wasn't a party during our stay. It also meant getting to see the parade at 7pm, which is much more appealing than the 8:45pm or later times to us.

We headed over to Disneyland from our hotel (Paradise Pier this time) around 5pm thinking we could leisurely get some dinner and/or snacks before staking out a spot. That wasn't exactly the case as already much of the front row spots were claimed. Of course, I knew people had been staking out spots really early for this parade, which is why we skipped it the last two trips, but the park was much less crowded than those trips and I didn't think getting a spot on Main Street would be as much of a problem this time. 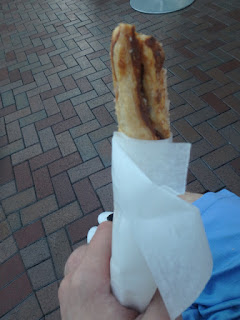 Mik's main reason he was resistant to even see the parade was having to get a spot hours early. Thus, I agreed that we would still get the Pumpkin Twist he wanted before finding a spot. After that was successfully acquired barely before they closed, we did manage to get a good front spot right next to the reserved area on the square facing The Mad Hatter. 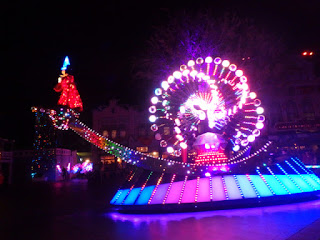 There is also a wheelchair seating area on the corner right where the parade route ends, but the area was still being used as a character greeting area and didn't get set up until about 30 minutes before the parade. We have used that spot for parades before and it is a good view if you get in the front, but it ended up being even more crowded than where we were and it would've been harder to end up with a front row spot there than what we did. 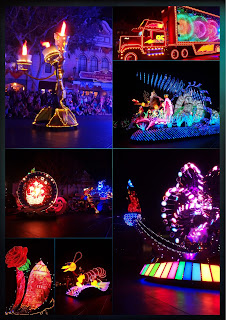 Overall we both really enjoyed the parade. Despite being reluctant to see it, Mik really did love it at least visually. The only thing he didn't like was that the spot we picked ended up being right under a speaker, so the sound bothered him more than usual. He still agreed it was a great spot otherwise, especially considering our options were limited. He especially liked that it ended up seeming easier to get out of the park after the parade than normal, although that did require us to roll off the curb rather than backtracking to a ramp.