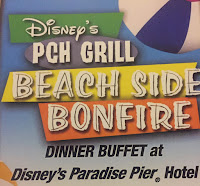 With so many different things we love and always new things to try at the various quick service places around the parks, we very rarely do any table service restaurants at the Disney parks. We also usually end up grabbing dinner at the hotel (or making in our room when at DVC resort), though, because Mik tends to prefer to just do the parks in the morning/early afternoon. Since this hotel doesn't have a quick service option, we decided it was a good time to splurge and do a more table service dinner for once. 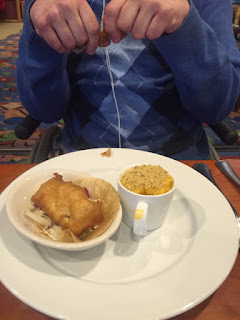 Mik tried the fish tacos, mac and cheese, fried chicken, deviled eggs, and shrimp alfredo pasta. He enjoyed everything, but his favorite was the fried chicken. 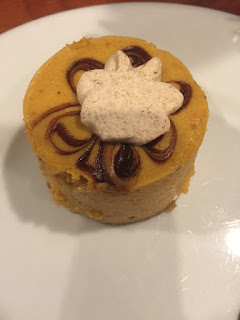 For dessert, he had to have the pumpkin cheesecake, which he said was the same or similar to the one he enjoyed at the French Market the day before. He also tried the vanilla bean dessert filled ice cream cone. His favorite thing, though, was dipping the house-made marshmallows (strawberry and plain) in the warm chocolate sauce from the S'more Bar. 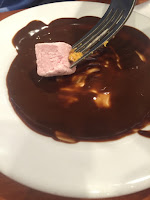 While it is much pricier than what we tend to spend on a single meal at Disney, it was an enjoyable experience and it was worth doing. Mik particularly enjoyed that he could have just a little of a lot of different things. He also liked that it was one of the few buffet opportunities that did not include characters, which he's not a fan of. Only thing we didn't like was the carpet was very thick making it take a lot of effort to roll him through the seating area, which is why I only took him to see the buffet options once and on the way out he noticed he missed some things he would've gotten if it was easier to take him back to look.