Experiencing everything in Galaxy's Edge was the main priority for Mik and pretty much our whole group except me for this year's family trip. We picked Wednesday as the easiest day for us to get to the park when it opened and have a chance at a boarding pass to get on Star Wars: Rise of the Resistance. We did barely manage to get us all in the park a few minutes after park officially opened around 7am and ended up with a number that starting "boarding" around 2:15pm.

While I'm totally not into Star Wars and especially the too realness of interactions that happen in the new land, I do like this new concept for handling the line for a new attraction. The only issue with it was that we only had one chance to make it work this trip, which meant we had to just all go if we were going to do it instead of most going on Smuggler's Run first and then being able to give a real idea about if it was worth it to transfer Mik (or for us non-thrill people). 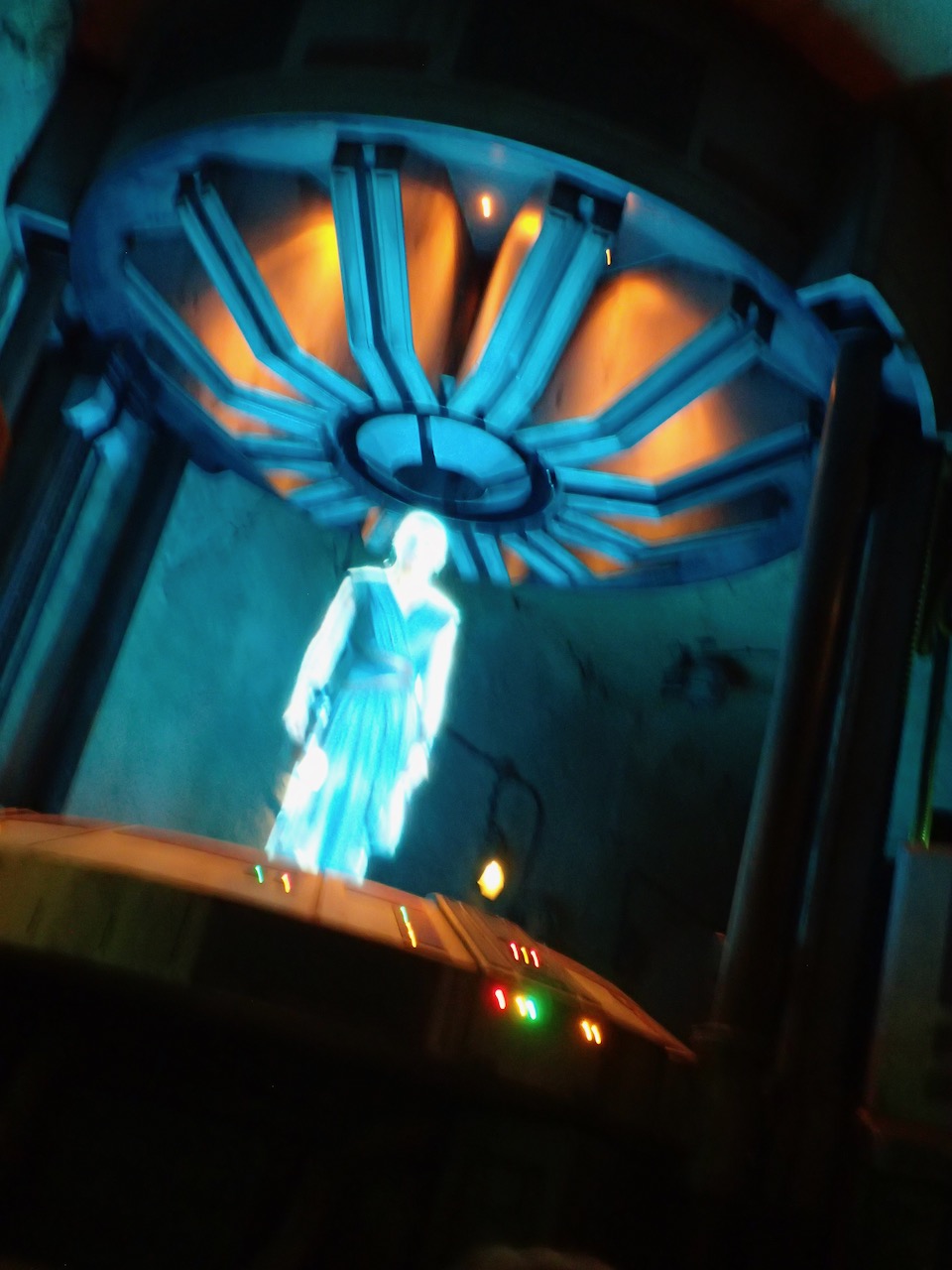 The first part of the attraction is going into a room as a large group and a hologram recruiting you for the resistance. Or maybe you're volunteering to join. I don't know Star Wars obviously and I honestly wasn't paying much attention to anything except trying to not get hit in the head again by Dad taking pictures. 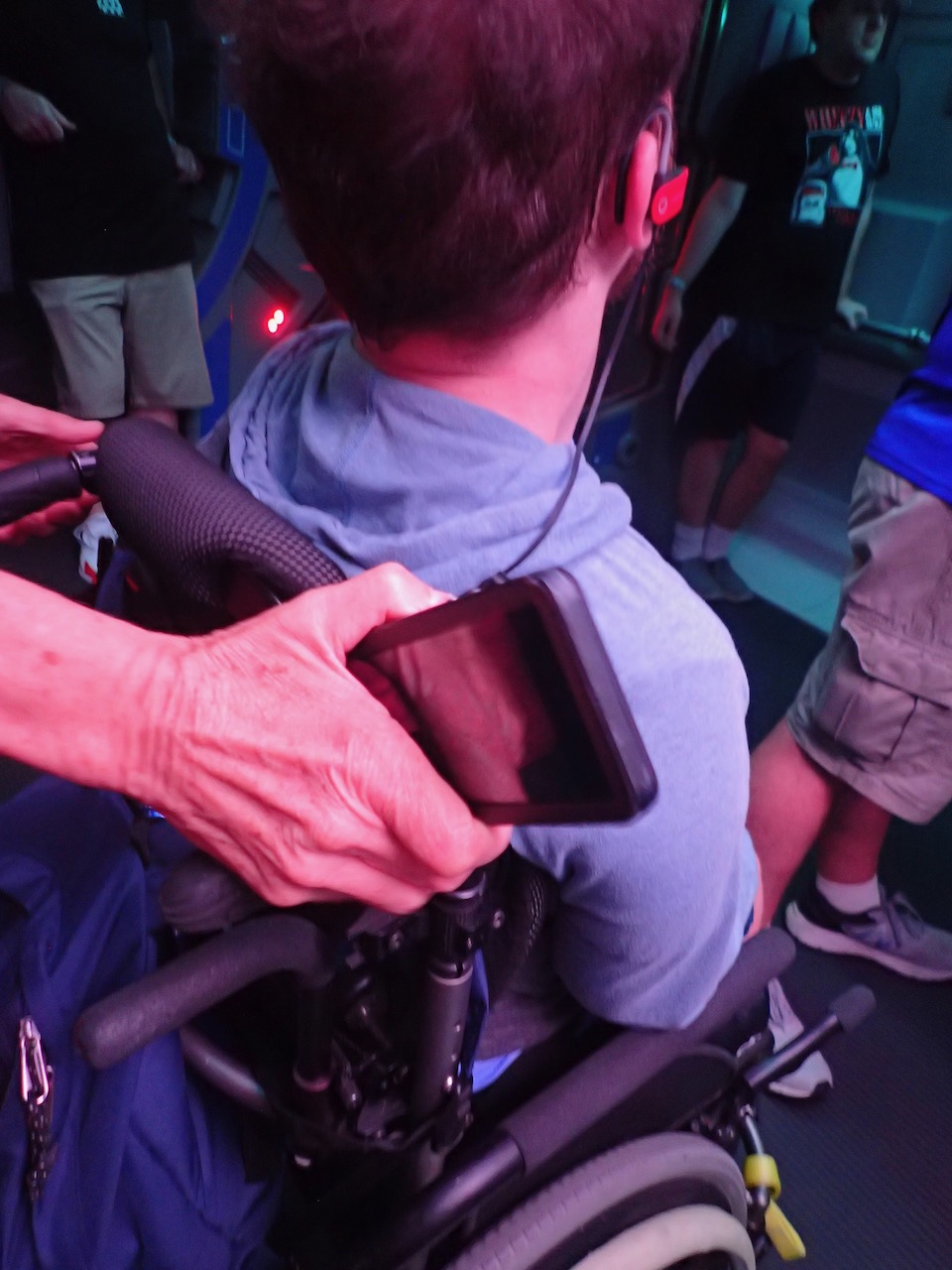 Next you board a transport. This is a simulator type thing, but you can stand wherever you find a spot. There is a screen in front and back, but Dad ended up positioning Mik in the middle facing forward where people blocked the view. Thus, Mik found it an extremely annoying experience. It was like taking a metro ride in the middle of the "line" for an attraction rather than actually being a part of an attraction. Basically, it seems you had to know that you should try to get a place to actually experience this part and not be the stragglers loading last... 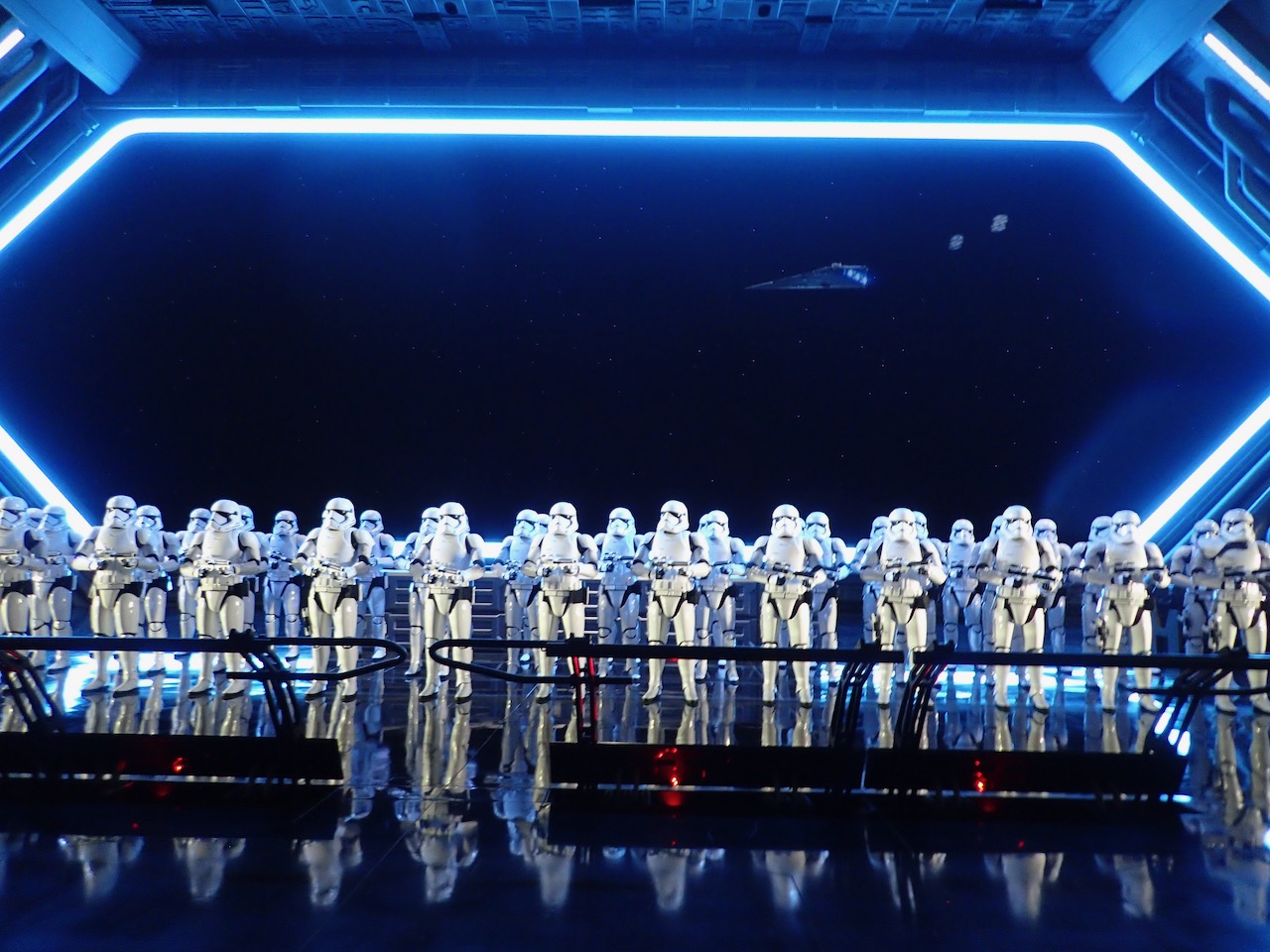 The transport gets captured or something and you become prisoners, I think. 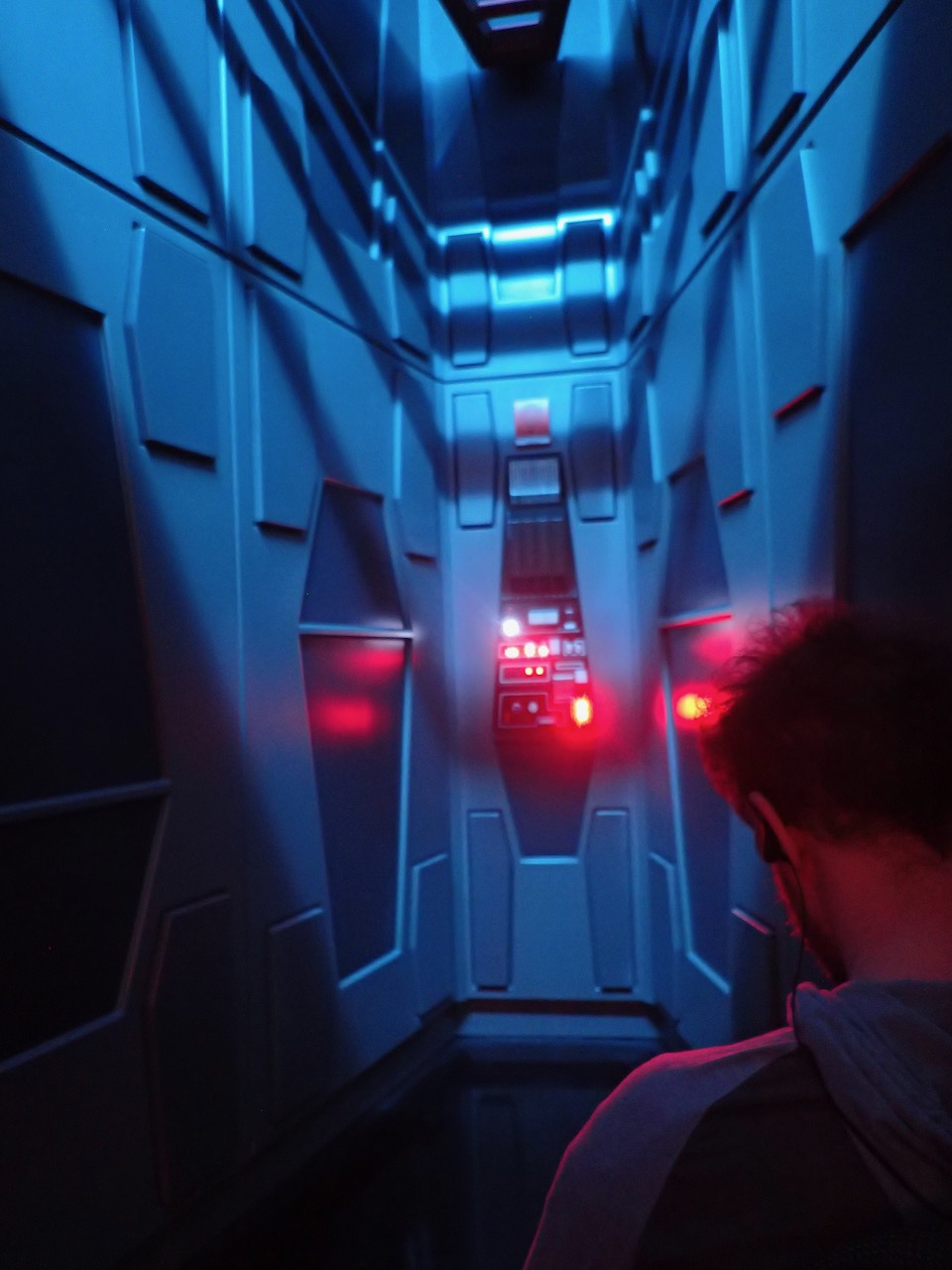 I think this where we get lined up for processing as prisoners or something and then we get help from the Resistance and freed? Seriously, I'm clearly not the one that should be trying to explain this experience! 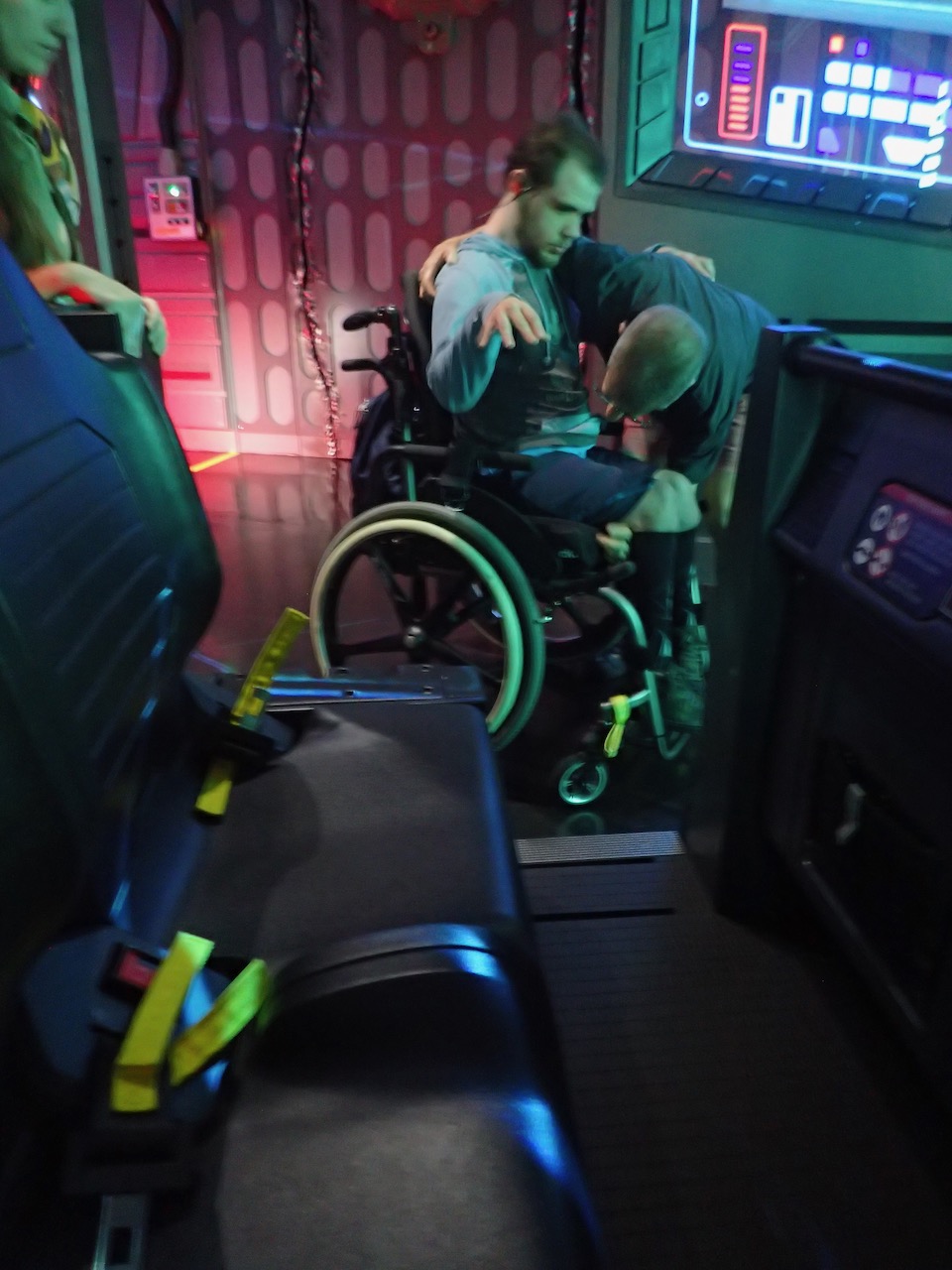 Now finally you get on the actual ride. Not sure if thee side of front row always opens that wide or if they made that happen to make the transfer easier, but it was a relatively easy transfer. Also, the way this ride is trackless seems to help allow for to you really take your time loading if needed. 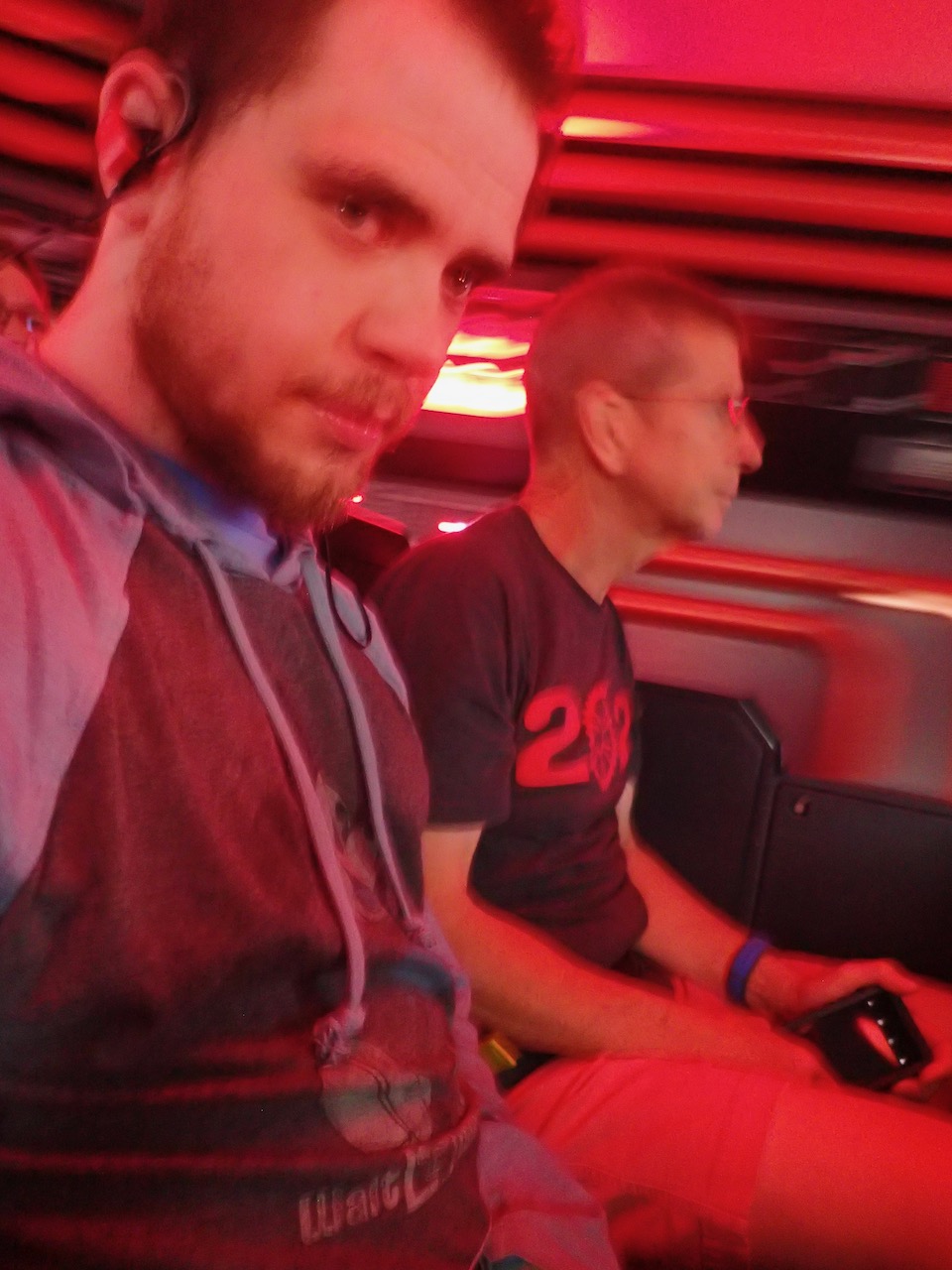 I might not have understood the attraction of the ride, but Mik enjoyed the experience as did the rest of our group that was as much if not more into Star Wars as him. 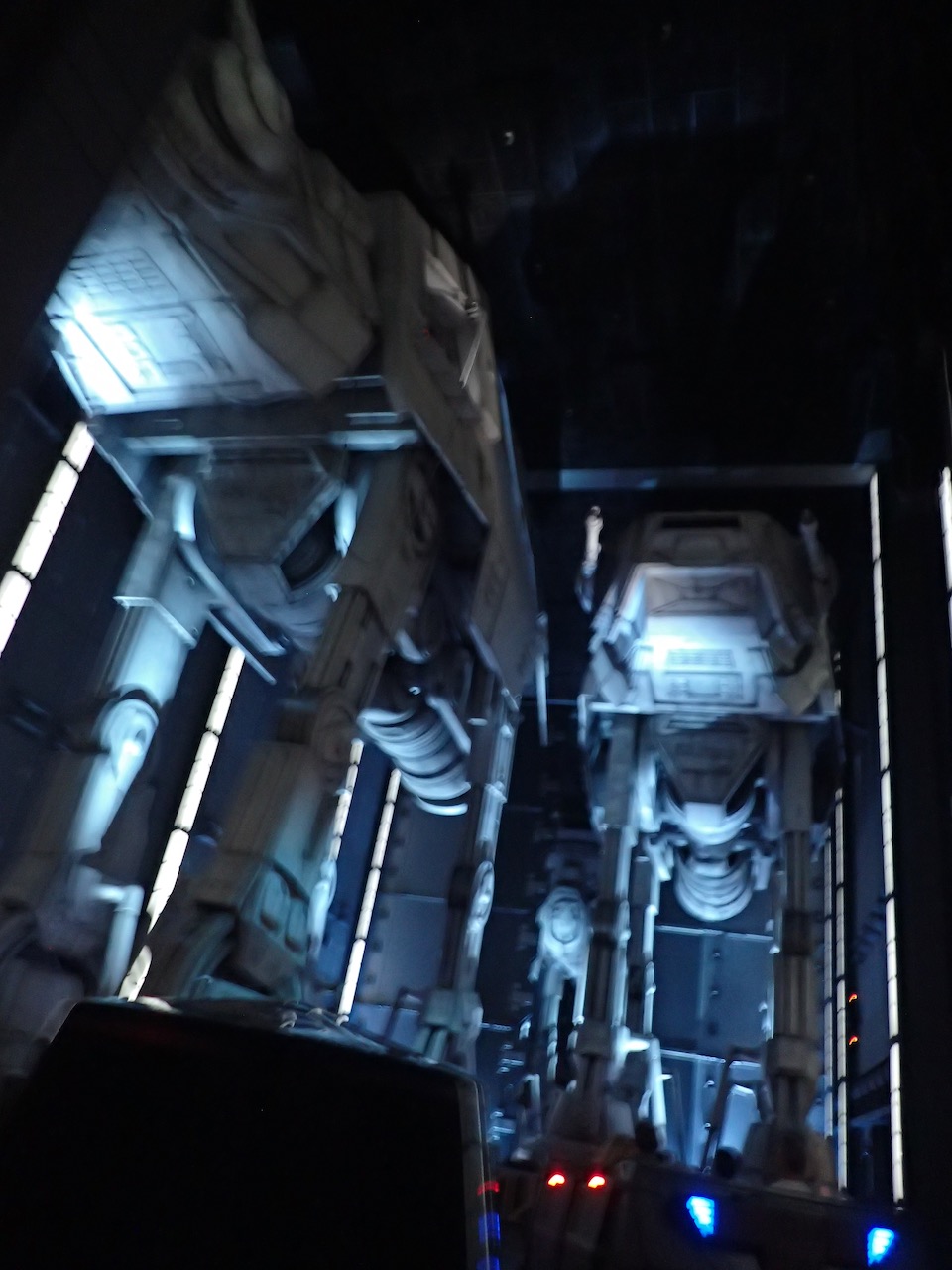 Certainly not an attraction I would care to do again, especially without someone else transferring Mik, but I will admit that the attraction was impressive. As it really wasn't that much of a thrill ride, though, we would do again if the rest of the family wanted to on a future trip. 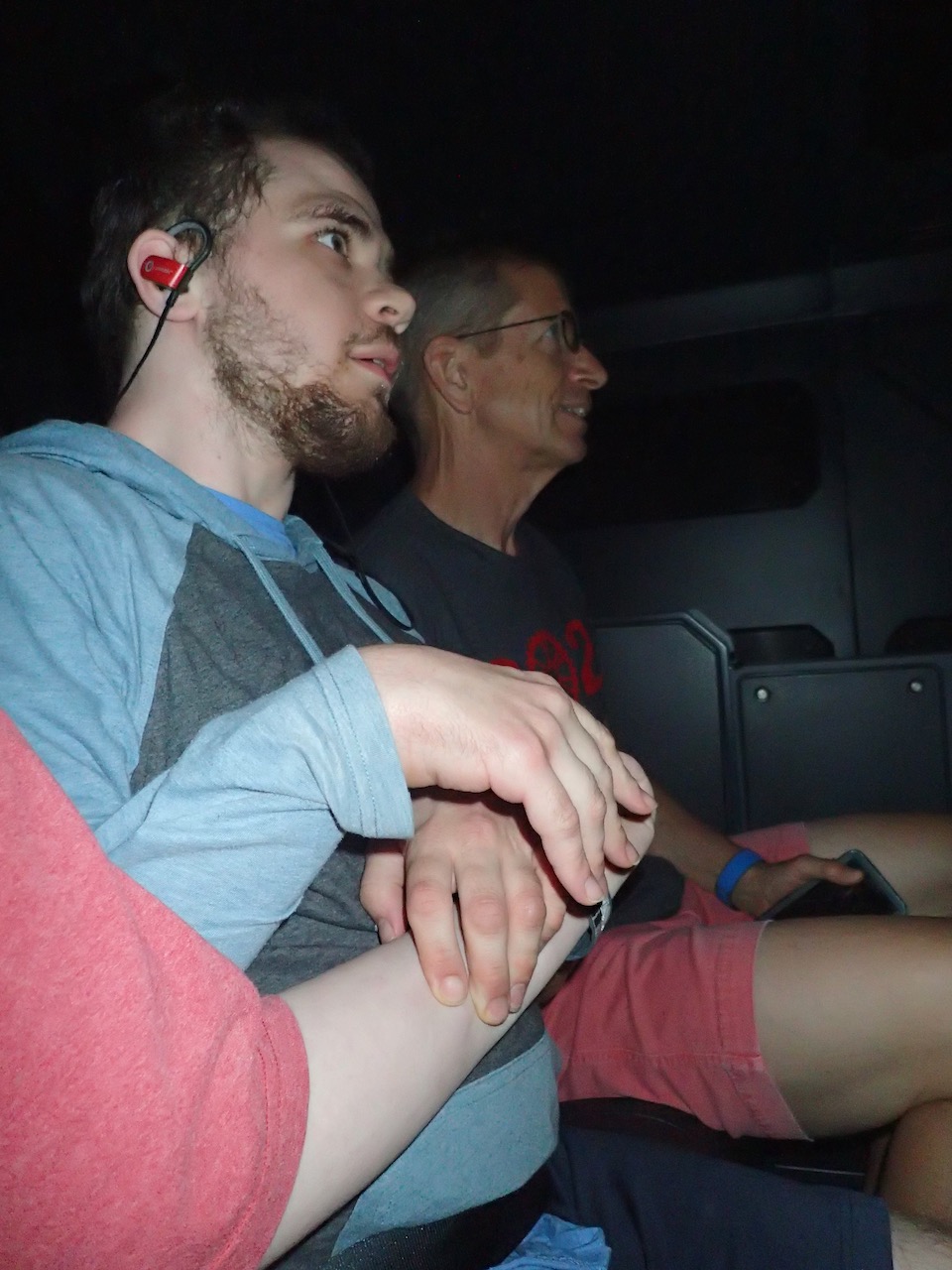 Basically, the only part that was a thrill was the drop at the end, which apparently Mik wasn't prepared for (to me it was obvious we were entering an "elevator") because he grabbed my arm and didn't even realize he had when I asked for my arm back when we were pulling up to the unloading area.

The end of the ride was a little confusing as the wheelchair wasn't there and they kept asking us to get out. You unload in a different spot so clearly the wheelchair has to be moved and it appears they did do that as it didn't take them long to grab it once they realized we needed it. Apparently, they are supposed to mark the vehicle or something when loading, though, so they know to bring it when you arrive to unload.