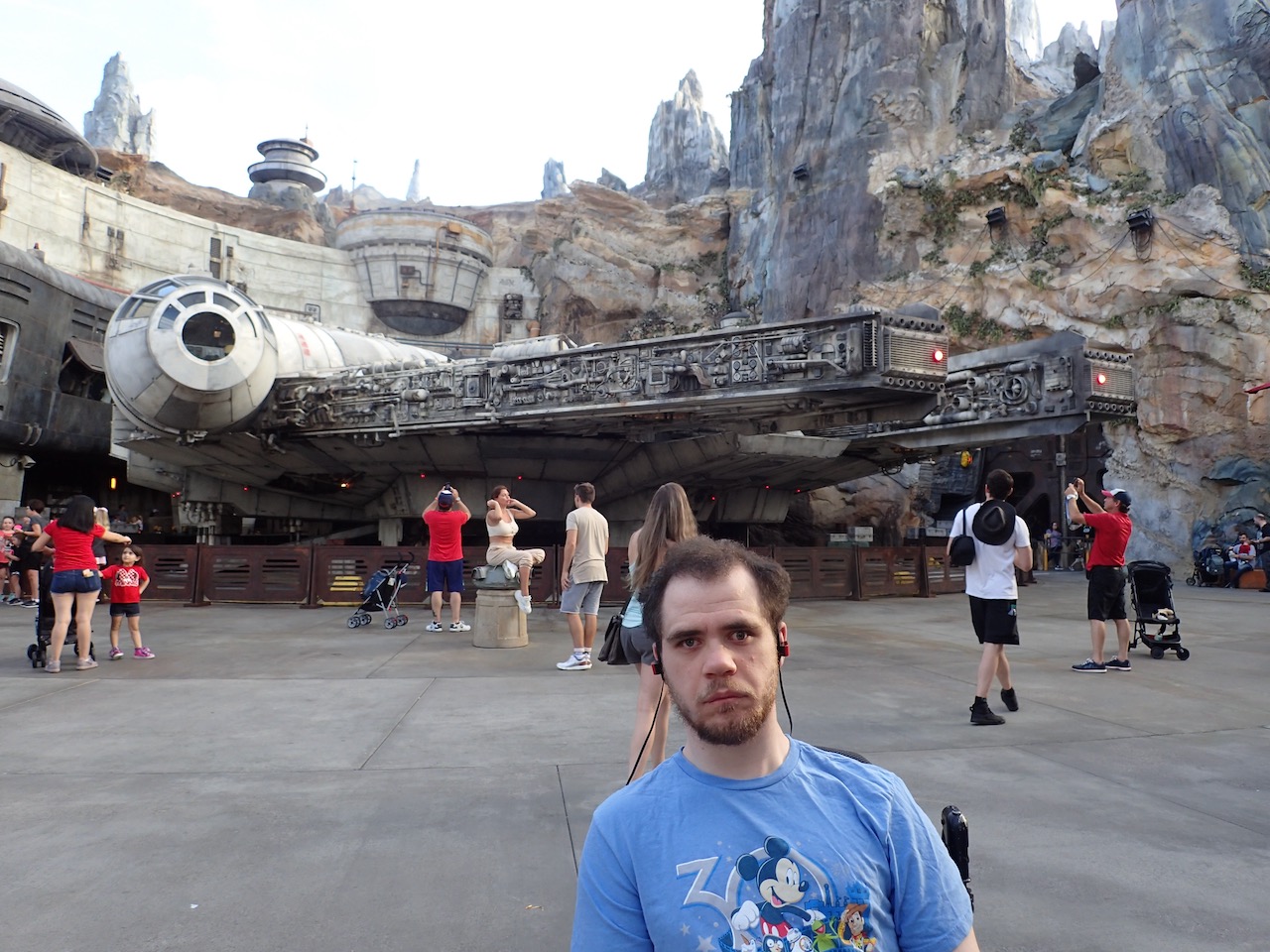 Mik and I initially didn't go on Smuggler's Run as we weren't sure if it was too much of a thrill ride for us. Later in the trip, after the rest of the group was able to assure us it was worth trying, we decided try it. 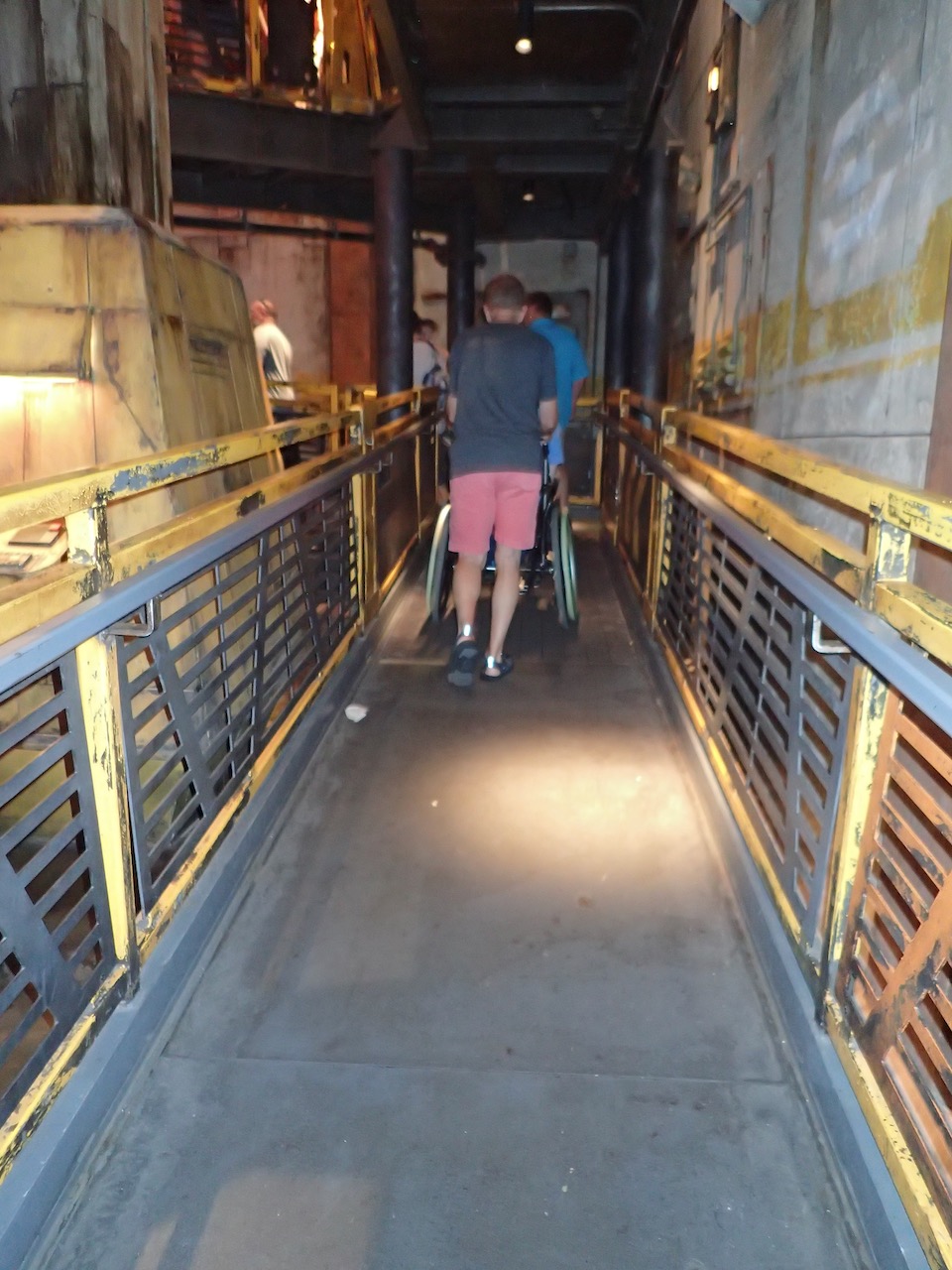 Mik wasn't much into the queue, but only because it was right after we had done Rise of the Resistance and had been in the park over 9 hours. Later he realized it was the kind of experience we always feel like we miss when we do Star Tours because the wheelchair access for that ride skips the regular queue entirely and only gives a brief look down at it. 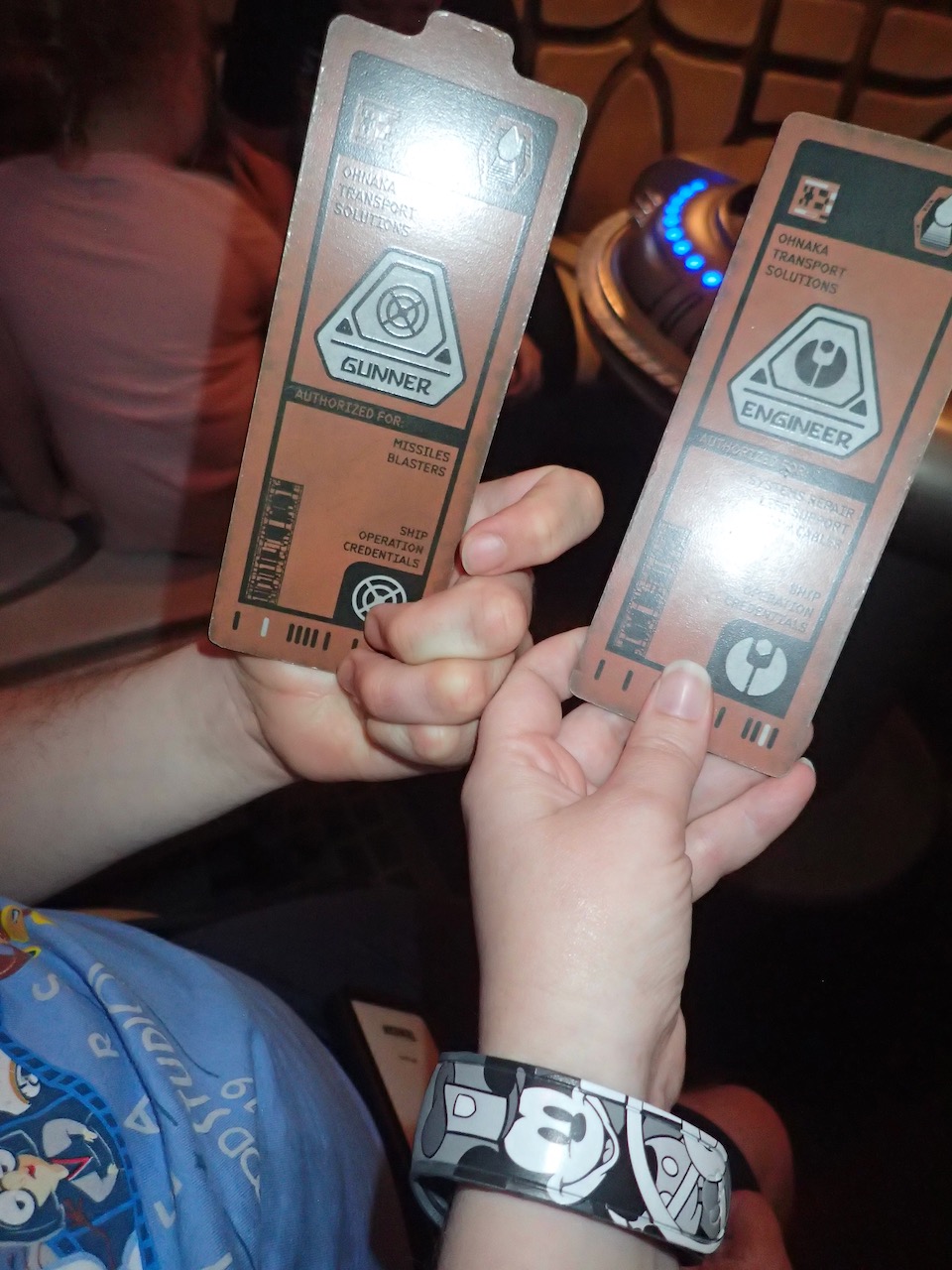 When you get to the front of the line, you are given cards with your role (pilot, gunner, or engineer). As there are only six per vehicle, our group had to split to two groups (5 and 2 paired with others). 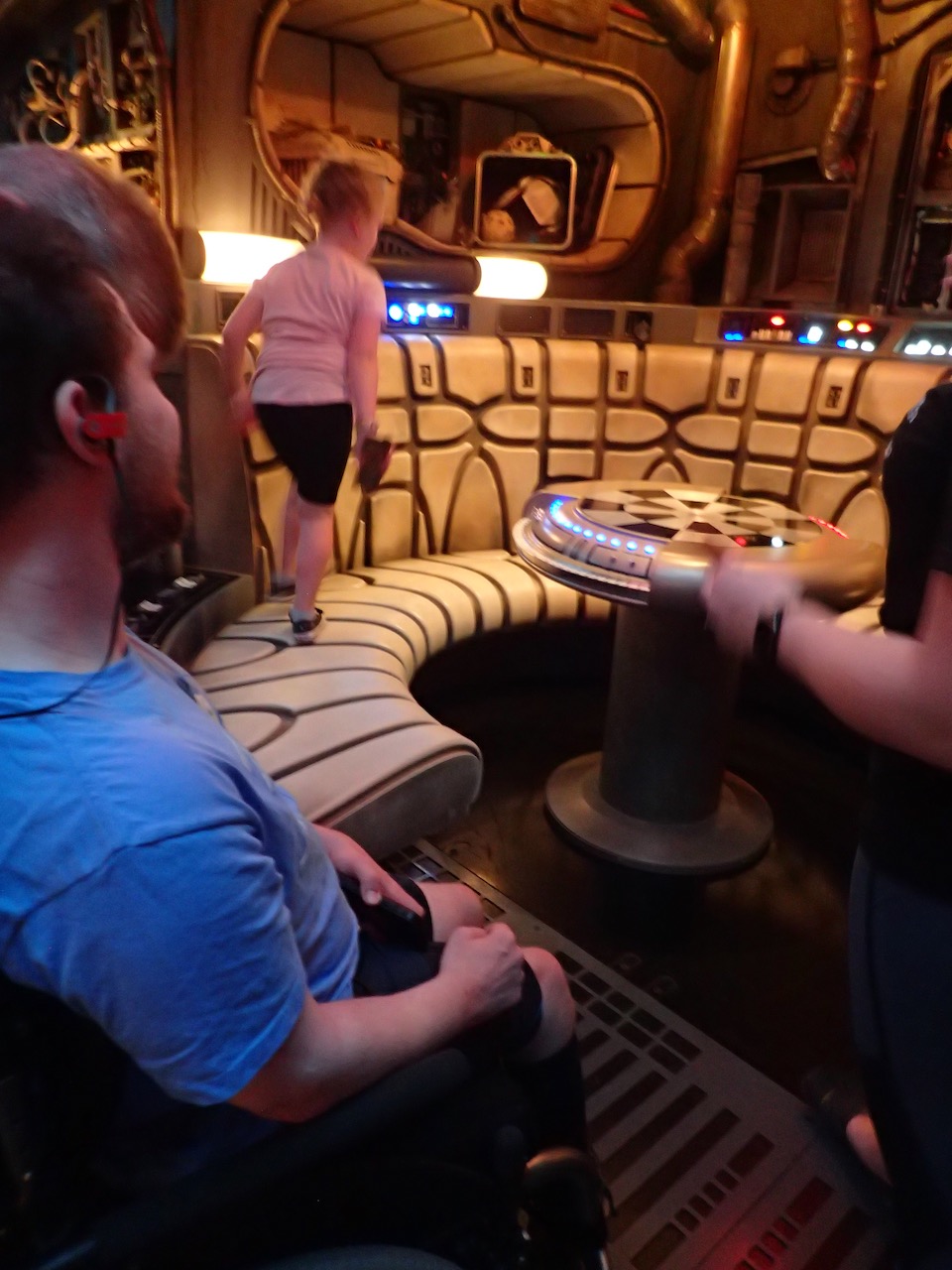 We then waited for our color group to be called for our mission. This is interesting designed waiting area and as we had to wait about 15 minutes for the one spacecraft that is easier for transferring, we had plenty of time for playing/photos. 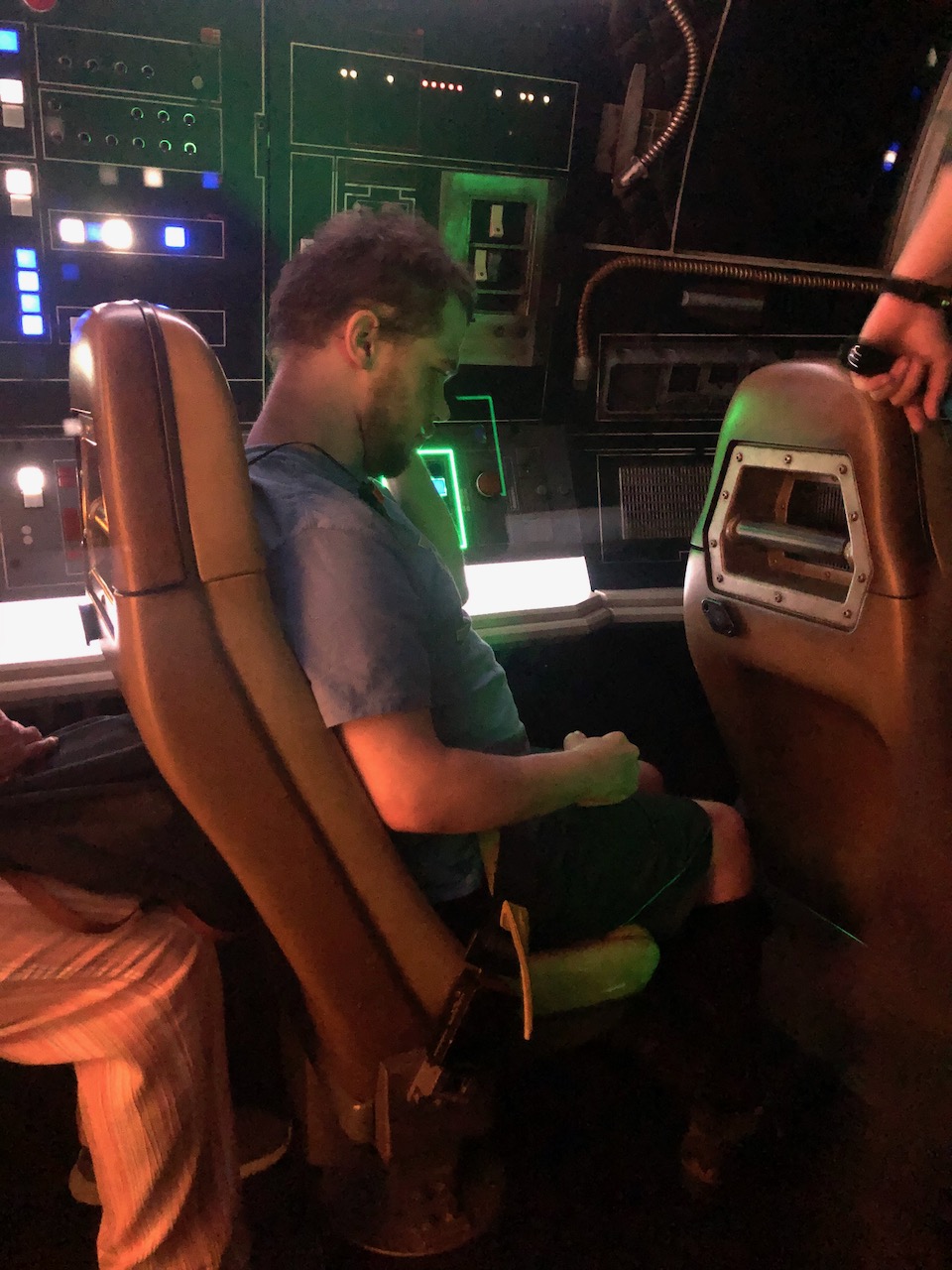 The ride is a simulator pod. I assume the middle aisle is smaller on the other pods and the reason we had to wait it that this one has a wider middle aisle to roll into and transfer to the ride. It is a very easy transfer as the seats don't have armrest to even have to move, although that then means there is on armrest. Again, after our Jimmy Fallon simulator experience we just don't see how this simulator couldn't have been designed as a non-transfer ride, especially considering the Rise of the Resistance has a simulator part that you can freely roam on.

The actual ride experience of a mission and working together is interesting and I actually enjoyed this Star Wars attraction. I was one of the engineers and had to press whatever buttons lit up. Mik was one of the gunners, which we actually did some trading of role cards for him as those that had been on before explained it was the easiest (at least if done on auto). He probably could have done engineer also, but it would have been harder for him to reach everything and enjoy the view part of the ride. He wouldn't mind doing either gunner or engineer now that's he's been on it, but he doesn't want to even try pilot as it seems hard to reach the controls as our dad had to reach over to push one button when needed for the five-year-old. 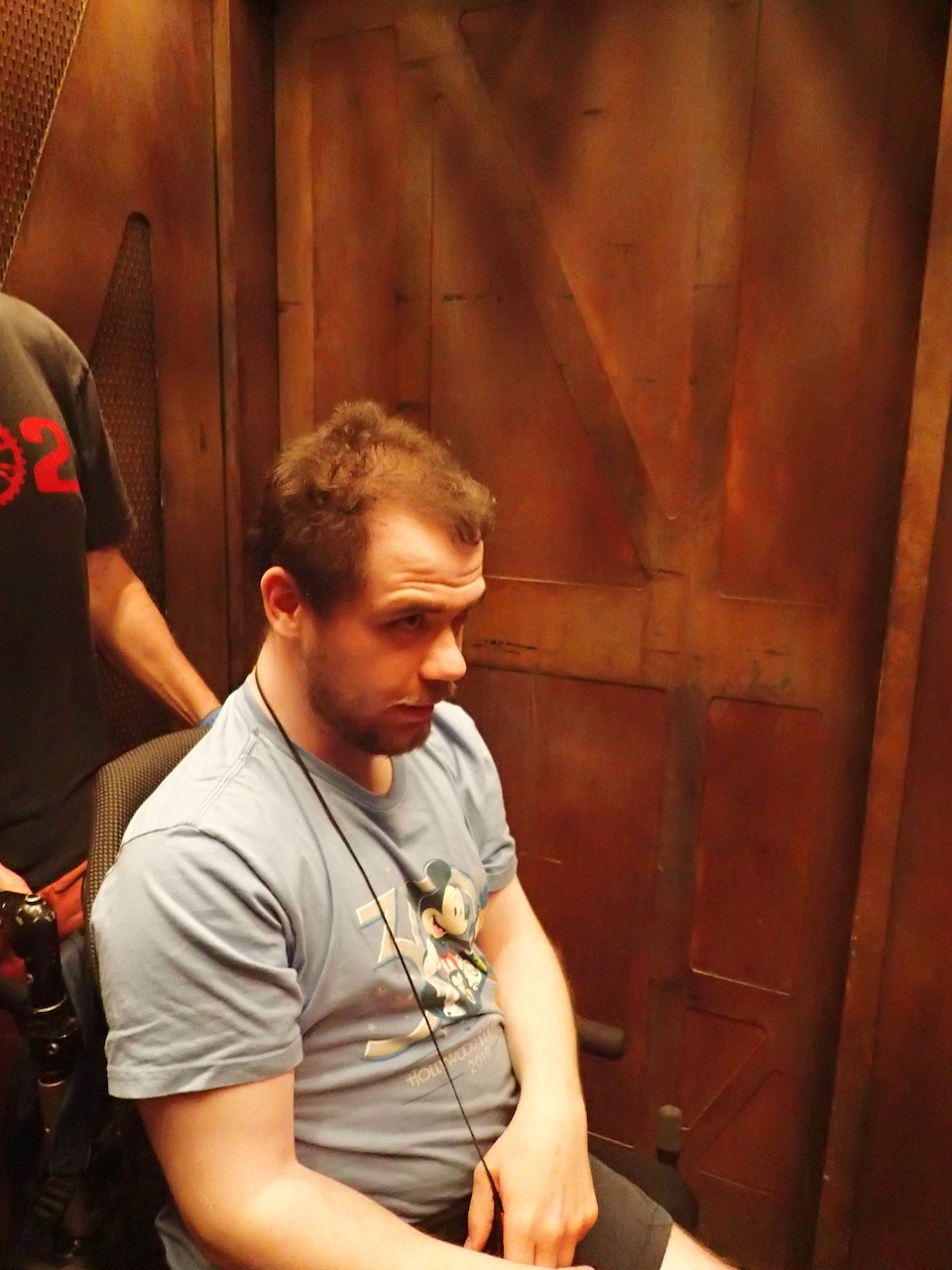 And the best part of the attraction, the elevator at the end. Not really as we actually enjoyed this attraction, but different themed elevators have been a favorite thing for us to discover ever since Mik was little and we used the ones to access the Indiana Jones ride at Disneyland. One of these days maybe we'll actually put together our list of favorites in order that we keep meaning to do.

Overall we really did enjoy the ride as it was like simulator game. In particular, it was amusing how our pilots (our dad and the five-year-old) ended up calling each other bad pilots and we were all yelling at our dad when the button needed to be pushed. While we really feel you could still have been a very fun non-transfer ride experience without the movement if they had done something like how the movement can be turned on or off for Winnie the Pooh, this is one of the very few transfer rides I can see us doing on the WDW trips Mik and I do on our own.