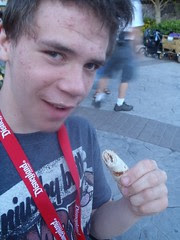 Pretty much the only thing we did in the Norway Pavilion was go into the Kringla Bakeri Og Kafe two days in a row.  The first time was when we were leaving Epcot for the day and Mik thought we were going to just rush past the countries we were going to come back to the next day.  However, I made him wait outside the bakery and got him all pissed until I brought out lefse.  Then he was quite happy.  The next morning we had to each get an order of lefse. 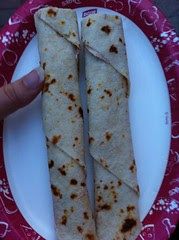 Mik and I both love lefse having grown up having it for holidays.  A few years ago I started making it myself, but I still stink at it and last Christmas totally failed and ended up with none.  I just cannot master rolling it out thin enough.  Anyways, the lefse at Epcot is totally worth the price when it takes me so much effort to make substandard lefse and it is actually a very affordable snack (~$2, I think) considering the price of most things at Disney World is expensive. 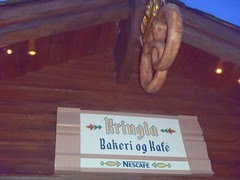 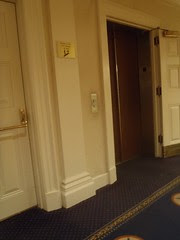 The American Adventure is the film shown in the American Adventure Pavilion.  There is an elevator to go up to the second floor and enter the theater.  The seating area is kind of disappointing with it being along the back and the companion seats are movable chairs and not like the rest of the theater chairs like they normally are for the other shows at Disney parks. 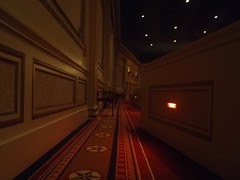 The show is totally worth it, though, and the view is good.  Mik and I both really enjoyed the show.  The show features a variety of animatronics and scenes played out from American History with Ben Franklin and Mark Twain hosting. 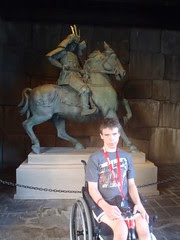 The Japan Pavilion ended up being Mik's favorite Pavilion to explore in Epcot.  For one, he loved checking out the various anime things in the shops.  His favorite part was the Spirited Beasts: From Ancient Stories to Anime Stars exhibit.  Mik loved that there was an automatic door button for going to the Spirited Beasts exhibit and the button was even framed with wood to make it blend in with the architectural style. 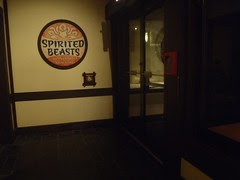 The Spirited Beasts exhibit is a great little exhibit about Ancient Spirits and how the ancient Japanese culture has inspired the more modern Anime art.  Mik enjoyed finding many references to the various anime series he has watched on television and online. 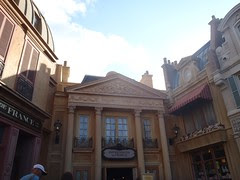 Impressions de France is a short film featuring scenes of various regions of France.  It is not all that amazing, but it is an indoor attraction for escaping the heat or rain when at Epcot.  Of course, Mik found it an annoying thing that I made him do before we went and got the eclair he wanted. 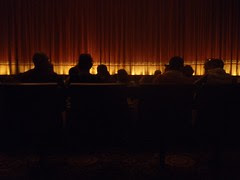 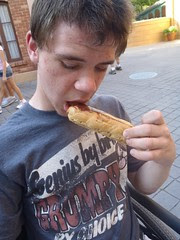 The France Pavilion is among Mik's favorite places in Epcot.  This is because of the chocolate eclairs at the Boulangerie Patisserie.  He remembered getting one back in 2007 and was one of the main things he looked forward to getting on this trip.  He was not disappointed by the actual eclair, but he does not like the bakery building set up. 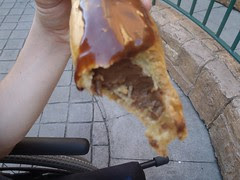 Mik ended up waiting outside while I waited in the line to go in and get him an eclair.  There is a ramp up to the door, but the line was on the stairs and it ended up being a good choice to just leave Mik outside because the exit does not have a ramp.  You can get back down the ramp by the entrance, but that would have required asking several people to move out of the way in the cafe style seating area between the exit and the entrance.  Plus, it is quite crammed inside the bakery with two lines forming down the middle, but Mik thinks the eclair is totally worth it as long as someone else goes in and gets it for him. 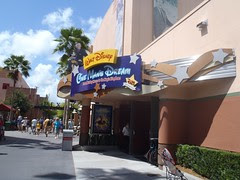 Walt Disney's One Man's Dream is an exhibit and movie.  You can wander through the exhibit at your leisure and then go in and watch the movie when they announce it is about to start.  However, after the movie you have to exit and have to come back around if you did not finish looking at everything before seeing the movie.  It is an okay place to get out of the heat, but the exhibit area seems to get crowded easily even though the theater seemed rather empty when we then saw the movie. 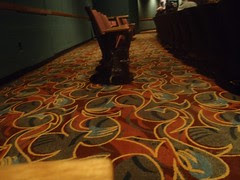 Mik and I both really enjoyed the displays of various things from Disney and Disney World history.   However, it got rather congested in some spots with there not being much open space to maneuver around the stuff on display and people trying to skip around.  The theater was good, though, with wheelchair spot and companion seats in the back. 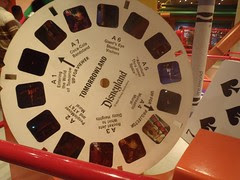 The Toy Story Mania ride itself is pretty much the same as at Disney's California Adventure, but the queue and loading area is much different.  The queue is so much fun to walk through with it trying to give you the impression of being toy size in Andy's Room.  There are a lot of different toys and such around including a giant Viewmaster, a Lincoln Log cabin, and of course the talking Mr. Potato Head.  It is nice that it is mostly inside and much more interesting than in California, since it can be a long line. 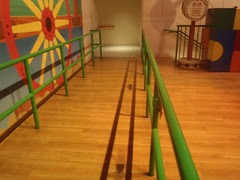 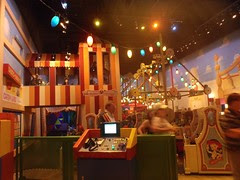 The wheelchair vehicle is the same, but it was our first time with the new system of having tie downs in the wheelchair vehicle for Toy Story Mania.  I guess a lot of people had problems of tipping back some when riding, which makes sense as the ride is kind of jerky, but surprisingly Mik has never had that problem, as he freaks out on buses with tie downs and any tiny movement.  He actually hates the addition of the tie downs.

Mik was quite annoyed that it took them about 10 to 15 minutes to get the tie downs clipped onto his wheelchair.  I barely convinced him to go a second time later in our trip by telling him they are still new to this with the tie downs being a recent addition.  Luckily, the second time the CMs were better at finding the places to clip onto his chair.  However, after our August 2011 trip to Disneyland we have realized the problem is them never seeing Mik's chair design as in Disneyland they ended up calling who we think was the supervisor to do the tie downs (the next day he came out to do it right when we started loading), but that only took about 5 minutes because they quickly realized it was better to just ask someone more experienced than figure it out themselves.  Now I also know what spot to tell them to use with the size hooks they use. 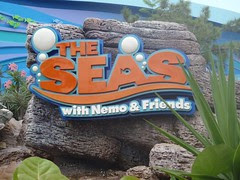 Mik was interested in The Seas with Nemo & Friends ride because it is actually wheelchair accessible unlike the sub ride at Disneyland (makes total sense why this is not accessible and many think the alternate experience is better).  The clams for the Nemo ride reminded us of the new Little Mermaid ride at California Adventure.  However, instead of Triton's chariot, the wheelchair vehicle is just a giant clam. 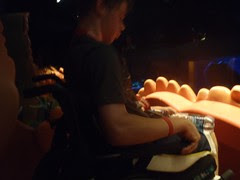 Overall we enjoyed the Nemo & Friends ride, but we were surprised how long we had to wait for the clam to come around.  The ride was basically a walk on, but it felt like 15 minutes before the wheelchair clam finally came around.  They do at least have an okay area you can wait in so the line can go past you as you wait. 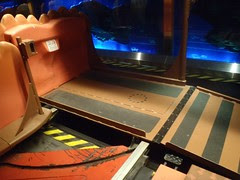 To get in the clam they slow the walkway, pull out the platform, and fold out the vehicles ramp.  The CM loaded Mik on, as they have the companion get in first.  It is actually pretty cool, as they just push the chair straight up onto the platform, then put the ramp back up and turn the platform back into the clam.  Like The Little Mermaid ride and the Disney World's Buzz Lightyear ride they are usually able to do this without having to stop the ride. 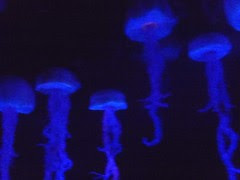 The ride reminded me a lot of the sub ride, but is actually better.  Now that we have done this ride, Mik does not feel like he is totally missing out on the sub ride anymore, although I still keep trying to convince him to try the alternate experience for that one. 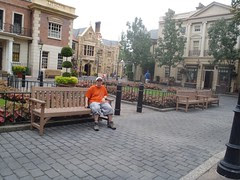 Mik was most excited about stopping in the United Kingdom Pavilion for Fish & Chips.  We got them from the Yorkshire County Fish Shop and then took the ramped way down to the waterfront, as the tables were all crowded despite it being mid afternoon and not an actual meal time.  It actually worked out better, as there were several empty benches and it was much quieter plus a little breeze off the water to make the hot humidity not seem so bad.  However, Mik was slightly disappointed in the fish and chips.  They just are not the same to him as when he fell in love with fish and chips on his trip to London years ago. 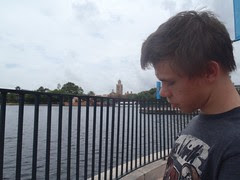 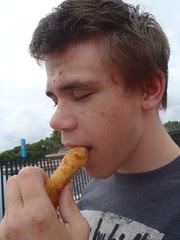 Other than eating Fish and Chips we also wandered around the UK pavilion a little.  There is a nice garden area in the back. 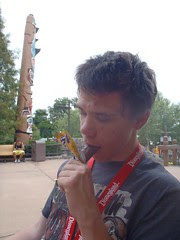 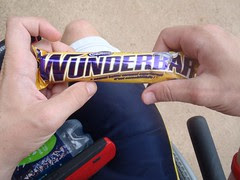 We started our journey through the World Showcase with the Canada Pavillion.  Mik's original goal was to eat his way through the countries, but he ended up giving up eventually because some place like Canada only have sit down places.  However, in Canada he did decide to get a Wunderbar candy bar from the gift shop.  It sounded interesting to him because it is a peanut butter caramel candy bar and he loves peanut butter.  He did not really like it, though, because he is not a fan of the stickiness of caramel. 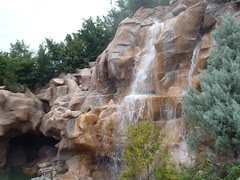 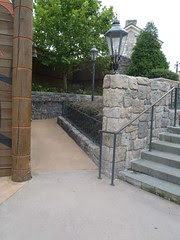 We did not spend much time in the Canada Pavillion because the area is pretty small other than the restaurant area.  We just went up to the waterfall.  There are ramps to the side of the stairs to get to the shop and then up to the waterfall.  However, to get to the movie there are stairs, so you have to go back down and through the restaurant entrance, but Mik did not feel like seeing it.