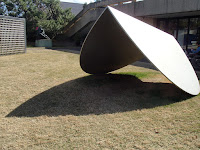 Yesterday we originally set out to visit the Sackler Gallery, but instead ended up at the Hirshhorn Sculpture Garden. It's been on our list to visit for quite awhile and since it was nice warm day, we decided to enjoy the nice weather and save the Sackler Galley for when it may be too hot (or cold) to enjoy an outdoor activity. 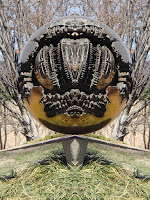 Mik enjoyed checking out the various sculptures in the garden, In particular, he had fun playing with the different art modes taking pictures of the globe sculpture. It is also nice that while it isn't really any bigger than the National Gallery of Art one on the other side of the mall and may even have fewer sculptures, it seems more like more of an experience because of the tiered design. 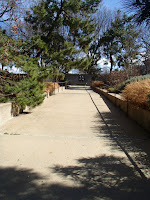 The tiered design does mean there's stairs, but there are nice long ramps to access all areas. 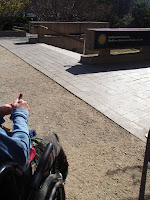 While the garden is all concrete/brick paths, the ramp access is only from the mall, which is a packed dirt/little bit of gravel path. 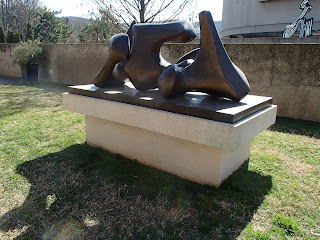 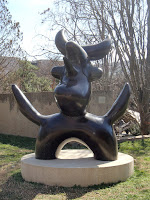 We also enjoyed playing Pokemon Go here as there was a gym that you could easily battle while also enjoying the music that plays in the one area. Also, you could get three Poke stops at once in the other part of the garden. Mik even thought this statue looked kind of like a Pokemon. 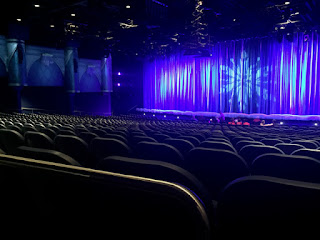 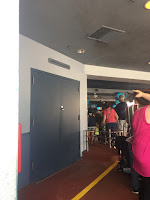 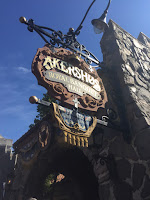 Akershus Royal Banquet Hall has been on our list to try for awhile. We even had a reservation to go on one of our trips last year, but decided to cancel a few days before because we weren't sure about the whole character dining aspect. To some extent, I am glad we saved it for this trip as at least we had one person into the princesses/characters, but I also kind of wish we had already done this place and realized it isn't worth it when it was just us and done something different (i.e. at least cheaper and likely much better experience) for our larger family trip. 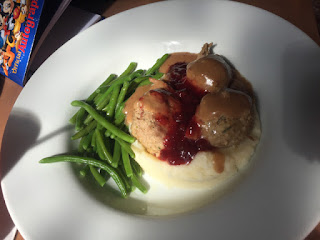 The main thing that appealed to us about Akershus is the Norwegian inspired menu. It didn't really disappoint in this regard, especially for the meatball lovers. However, I had thought it was entirely a buffet and it was only the appetizers that were. This didn't bother us so much except that it was fixed price per person and then dessert was a specific trio of desserts for the table rather than each ordering your own or a buffet. 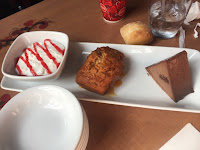 We were mainly disappointed in Akershus because there wasn't much of a character experience, which was why we had chosen to even do this restaurant after we took too long to plan dining and couldn't do the character breakfast we wanted. There are several princesses that come by, so the number of characters is nice. However, they seemed to be in a rush and there was barely time to have them sign the autograph book and take a photo with the kid. Thus, by the time the kid got used to the concept they were already done. All other places we've done the character dining with her, the characters came around more than once. I kind of remember this was the same way the time Mik, my Dad, and I ate at Cinderella Royal Table, but at least there you have a fun castle atmosphere and we had service.

One of the reasons we did not like Akershus was the price. We knew that going in it would be expensive, but somewhere I had gotten in my head that lunch was never more than $50 and it was $57 per person (at least that was before the annual pass discount). The price wouldn't have really bothered us if at the same time we had gotten the character experience we expected (or even just some attentive service...never saw waiter after ordering until they were trying to rush us to finish and clear the table at end, so drinks never got refilled, and they force you to pay 18% gratuity for nothing).

Add to all that, they squeezed way too many tables into the space that it is almost impossible to even dine there with Mik. In order to get him into the table I had to lift and slide the chair sideways up to his spot. It wouldn't have been too bad if it was a regular table dining experience, but since there is a buffet aspect it was extremely annoying to get out around him (and almost impossible). This was the only reason we were glad the whole meal wasn't a buffet, but then we kind of wish none of it was.

Bottom line is I better just book that character breakfast six months out next year. Also, for princesses, Mik and I recommend Cinderella Royal Table over this. I don't remember the food being anything special and we had the characters skip us, but we still really enjoyed that dining experience simply for the castle atmosphere.

Be Our Guest Restaurant at Magic Kingdom 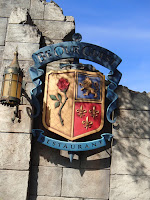 For years we've been wanting to try the dinner at Be Our Guest, but never seem to be able to plan out our dining soon enough to manage a reservation (we did the quick service lunch back before they did reservations for that). This time I only managed a reservation because I couldn't get one when planning our November trip and booking for February had just opened. I am glad we ended up finally doing it this trip as while it would've been enjoyable on our own, it turned out to be a great dining experience for our family trip. 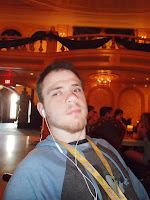 There are three different rooms you can end up being seated in. We were in the main dining room and really enjoyed the atmosphere, although either of the other wings seem just as good and it would be interesting to end up in a different one if we go again. 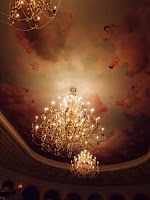 We all enjoyed the appetizers and entrees we ordered and found the portions to be good. Mik had the potato leek soup and the pork chop. I had the sauteed shrimp and scallops. 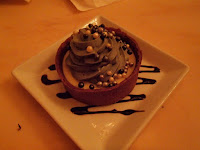 For dessert, since no one else ordered it, I just had to try the grey stuff. Sadly, it was not delicious, but only because I don't like frosting. The tart it was on top of was good, though. Mik ordered the Elcair a l'Orange and that was very delicious. 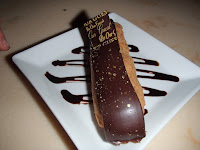 Before leaving, we visited the Beast for a group photo minus Mik who didn't want to do it.

Overall we really enjoyed Be Our Guest. We liked that it had a good themed atmosphere and that while there was a character opportunity, it was very easy to skip if you wanted because it was separate rather than being something they send you through before seating you or having the character(s) come around. Not sure if we would go for dinner next time, but only because the breakfast menu looks interesting.

Destination Info:
Be Our Guest Restaurant
Magic Kingdom
Lake Buena Vista, FL
Posted by wildcat1001 at 9:53 AM No comments:

Epcot International Festival of the Arts 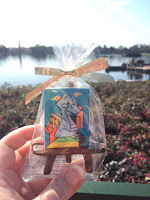 When we planned our trip the Epcot International Festival of the Arts hadn't been announced. Finding out we would be able to enjoy it when it was announced was exciting, but we were kind of disappointed it's only a weekend thing because we had already booked our two dining reservations for our week trip 2 of the 3 days we could've enjoyed eating at the festival. We did fit in trying a few things on Sunday for lunch before our early dinner at Be Our Guest, but Mik was disappointed we didn't instead eat at the festival booths on Monday, especially since it was the park we were in for our lunch and it turned out to be our worst Disney dining experience ever (not actually bad, but disappointing...will try to remember to do review later).

On Sunday, Mik and I park hopped by boat from Hollywood Studios and were planning to grab some lunch with my Starbucks gift card on the way over to meet up in Magic Kingdom for dinner. We had forgotten about the festival until we spotted the booth in Canada and then we picked up the little booklet that lists what all the booths have. Mik quickly spotted a picture of doughnuts and when I found the description we knew what we had to have for lunch. 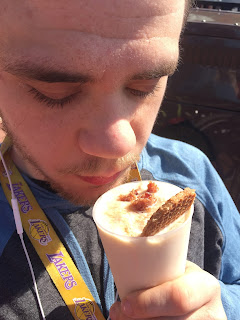 On the way to get the doughnuts, we stopped at the E = AT^2 booth for some cold drinks. Mik enjoyed the Deconstructed Breakfast (non-alcoholic version), which is a spiced apple chai tea shake with maple syrup, a waffle crisp, and candied bacon. It reminded me of the pumpkin one they had at the Food & Wine, which was my favorite last time. 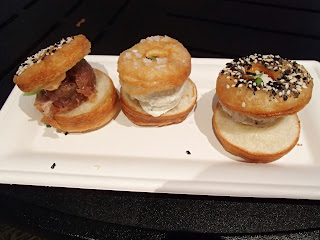 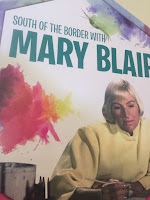 We also enjoyed the exhibits in the Showcase Plaza where Painter's Palate was located. In particular, we enjoyed seeing the Mary Blair art. However, they were rather small and left us wanting more of a real exhibit to experience.

Overall we enjoyed our little taste of the Epcot Festival of the Arts and hope to enjoy a lot more of it on Friday. In particular, it would be fun to get a photo in one of be part of the paintings displays.