Disneyland: "it's a small world" 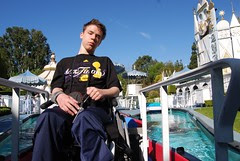 For years we would skip "it's a small world," but a few years ago I took Mik to Disneyland for the first time by myself and since I cannot transfer him we decided to go on it.  Now we always go on at least once per Disneyland trip.  This time it ended up being our first ride, as Buzz Lightyear Astro Blasters (our typical first ride since we were there when they were soft opening and officially opened it in March 2005) was closed for mechanical difficulties when Disneyland first opened.

Mik does not like "it's a small world" much, but he likes it enough to not mind going on it once per trip.  Usually, though, we pick it for later in the day when we are bored and want to kill some time actually being in a line, as the wheelchair queue can often get longer than the regular queue or at least about the same.  However, going first thing we did not have to wait at all and not even for the wheelchair boat to get around, as we got there just as it pulled up.

We consider the "it's a small world" accessible vehicle one of the coolest, although Jungle Cruise is similar (heard that one is under repair right now, though).  A ramp rolls up to the vehicle, so the wheelchair can roll onto a turntable lift that then lowers the wheelchair down into the boat.  Mik likes that he gets a higher up view of "it's a small world" from his wheelchair rather than being down low in the boat rows.  Plus you get the whole boat to yourself.  We even got to go around twice in a row because there was no one else waiting to go on the wheelchair boat, although Mik usually declines to do that on this particular ride.