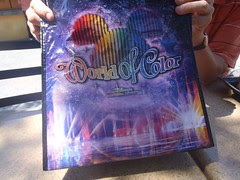 
I did not want to have to worry about getting FastPasses to World of Color and the $16 for a meal and FastPasses did not seem too bad for Disney.  Besides I willingly spent $60 per person for the Fantasmic Dessert Seating for the same trip, so really $16 per person did not seem bad at all.  Of course, it is much different and in the end it turned out not worth the $16.

Our main problem with the World of Color Picnic was the food.  It was not that bad amount, but of the three different meals we have (we each had something different) the only good thing was the apple pie that came with Mik's chicken.  The food was not exactly bad, but you can spend the same amount (or less!!!) and get something really tasty just across the bridge in Pacific Wharf (i.e. Mik's favorite of clam chowder in a bread bowl).  I am glad we did it once, though, because the World of Color picnic bag that came with our meals is fun for reusing for grocery shopping. 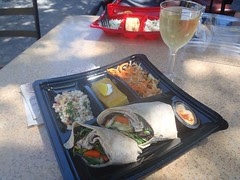 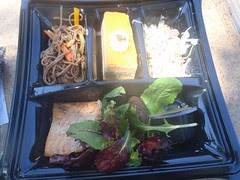 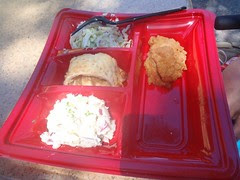 It was convenient that it came with World of Color FastPasses and we did not have to go over to California Adventure when it opened to make sure we got to see first showing.  However, they are just the same levels as you can get for free if you do the FastPass line thing.  Thus when it comes time to return before the show you still have to stake out a spot early and wait around for the show.

We ended up with Yellow FastPasses, although I hear some get Blue.  It is the same section we had FastPasses for back in March for the D23 2nd Anniversary Party.  This time the CM was not helpful at all.  We got there early and he said here go into this section right here (at the top) or you can go down lower, but he did not explain we had to leave section to do that and Dad was going to go down the steps with Mik in the wheelchair.  I would not let him do that, as Mik is not a fan of that kind of thing.  I also did not feel like trying to get our FastPasses back and do the through the Red area backtrack to the yellow route that we ended up doing last time, so we just took the handicap section at the top, especially since Mik wanted to try to avoid getting wet.

I was wary of what the view would be like from the top, as there are water level effects, but actually I was surprised and it really was not much different.  Since we got there early we were able to roll Mik up to the front of the section between two benches and sat on the bench next to him.  Mik thought the section was good and he would not get wet like up closer, but boy was he wrong!

We did not get wet from the spray like when we were closer, but Mik ended up even more wet because near the end they have a fountain that sprays straight up right in front of the handicap section.  We happened to even be quite perfectly line up with one right in front of us.  Sadly, we had even brought a blanket, but we left it in backpack because we were not sitting close.

Mik only agreed to see the show if he did not have to end up with wet pants like last time and boy did we mess that up.  Basically we have learned our lesson, no matter what part of the section you are in you could get wet.  Not exactly soaked everywhere, but definitely a possibility in certain spots really close to the show or near the fountains depending on how the wind is blowing that night.

Mik still likes the World of Color and I enjoyed it again as well, but sadly the TRON part is gone and the replacement Pirates is not quite as good.  Cool that it is changes somewhat regularly, but the TRON part was so cool because the lighting and effects involved so much of the scenery.  Of course, we probably will sometime see the show again, we will probably never do the picnics again.

Photos by Kjersti
Text by Kjersti with Mik's input