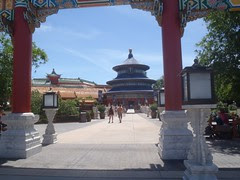 Reflections of China is a Circlevision show.  You go in and stand in rows separated by hand rails.  The screens are all around you will different images.  In concept the movie was cool, but it did not really work for Mik. 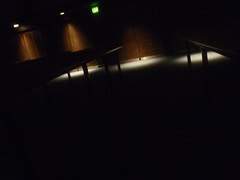 For one he was sitting among the crowd of people standing.  This was not too big of an issue, as it was not crowded and we could choose to stop where the people were not too close to be in the way of his view.  The real problem, though, is he could only see about half of the screens.  He not only felt like he was missing what was going on like in the Ellen ride, but in fact he really was missing some of the stuff, as it was not all the same view.

Basically, Mik says no more to Circlevision unless he has a way of turning around his chair when and how he wants.  Technically, he could do that, but in the dark it is hard to know where others feet are and not quite sure there is actually enough room for his turning radius.