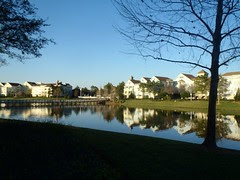 Since we usually end up eating in the parks anyways and there were even more food things Mik wanted to try at the Epcot Flower and Garden Festival this trip, we thought we would try a studio for the first time instead of a one bedroom like we have done every other time at a DVC resort.  Plus, we used our points this year to get a concierge level one for the 2014 marathon and did not want to borrow much from 2014. 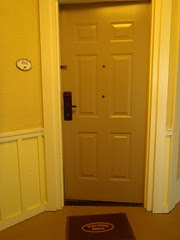 Entering the rooms they have mats that are a nice thought, but rather annoying with the wheelchair.  Actually, not so fun for stepping on either with the spiky style.  I suppose you could move it aside, although I wonder if it would just be put right back in place every day. 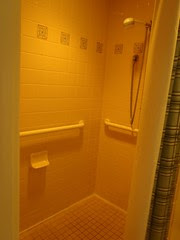 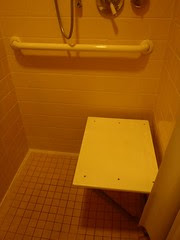 The bathroom was good.  Mik actually surprised me in that he was able to use the toilet on his own when we left him in the room one day, which he often cannot do with the raised toilets.  The shower was good as a roll in and holding the shower head to use.  For standing under it, though, it was worn out and kept sliding down to spray pretty much back at the wall instead of out or straight down. 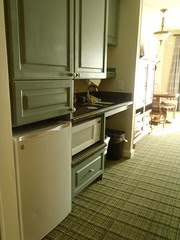 The kitchenette area was pretty functional.  The microwave was perfect for Mik, since he tends to just crawl around when in the room.  He actually used it to make his first ever quesadilla made all by himself. 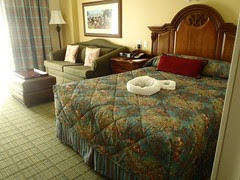 The deluxe studio has one standard bed and one sofa bed.  The room gets extremely crowded when the sofa bed is out, although it was better to just leave it out than deal with the annoyance it was to take it out in the first place.

The oddest thing about the room, though, is that it has a closet next to the bed.  You can barely walk sidestep between the bed and the wall to get to it much less have it actually accessible to someone in a wheelchair.  At least there is an easy to access closet in the entry, though.

Our conclusion is next time we will stick to our usual of a one bedroom or even a standard hotel room at the All Star value resorts.  The microwave was nice, but even the All Star resort we had just stayed at had mini fridges and the actual bed is so much more preferable than the annoying sofa bed.  However, Mik and I did decide it would not be so bad if it was just the two of us, as we would not need to fold the sofa out and it would be roomier than a hotel room then.  However, the inability to override the thermostat at Saratoga Springs does not make me likely to choose it again, as kept being too cold during our stay (it was very cold for Florida standards this trip) and I imagine it is too hot other times of the year.