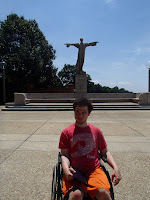 I had been meaning to walk over to the Titanic Memorial for months since we are often walking past the sign pointing to it. When I told Mik, the Titanic Memorial was a Pokemon Go gym he was like we must go see it. It wasn't about wanting to play Pokemon Go, although that is something we have been enjoying as something we can get out and do together since we tend to avoid the museums during the summer due to tourist crowds. He actually more wanted to go the memorial because he never even knew there was one and he enjoys checking out all the different memorials. 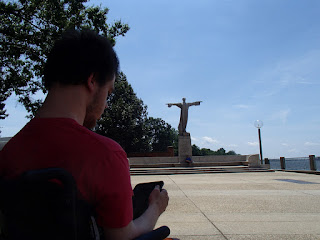 Getting to the memorial isn't exactly accessible for us, but that's because we tend to come from along the waterfront and that area is currently under construction. The problem is that while they have sidewalks open for pedestrian access through the construction area they have blocked most of the corners and not added any ramps. Going down the curb isn't a big deal and normally going up also isn't, but I'm just getting back my range of motion and strength from breaking my pinky back in April and maneuvering him over bumps is one of the main things I still struggle with. If we go the long way around from 4th & P Streets, accessibility isn't an issue (and more Pokestops).