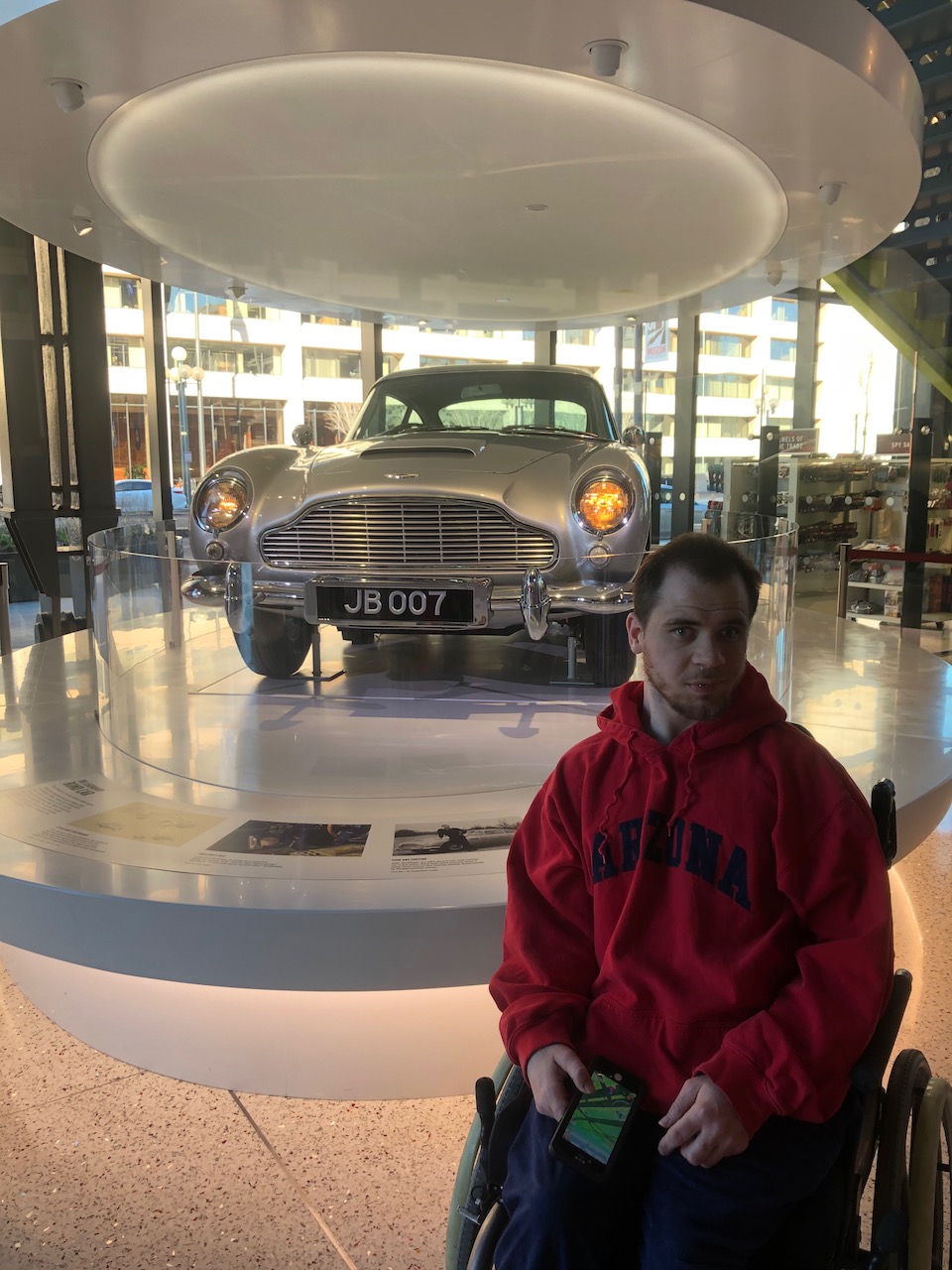 Visiting the International Spy Museum has been on our list to do since it moved to its new location  in our quadrant. All these years living here, we never visited the old location because I always thought we had done it sort of recently one of the years we visited DC when Mom went for a work trip. Turns out that Mik doesn't remember going, but Dad and I do so I guess we went a lot longer ago than I thought (probably 2006 when I was at American University and they visited for Rodeo Weekend).

The day we went ended up being one of the first good weather days of spring and one of the last chances for us to go do something in DC for awhile since everything shutdown by the next week and my trip to look at options for us to move to a new state seems to have turned into I've moved.

Getting to the museum can be difficult/confusing, especially in a wheelchair, the way it is located in L'Enfant Plaza. Their website appears to have good detailed directions for the metro exit, although not sure how well they work out since we walked from home and even if we used metro these directions require escalators. They do have a good suggestion that if you need to use the elevator to exit the station that you can then take the free Southwest Shuttle, which stops near that exit of L'Enfant Plaza and the museum. 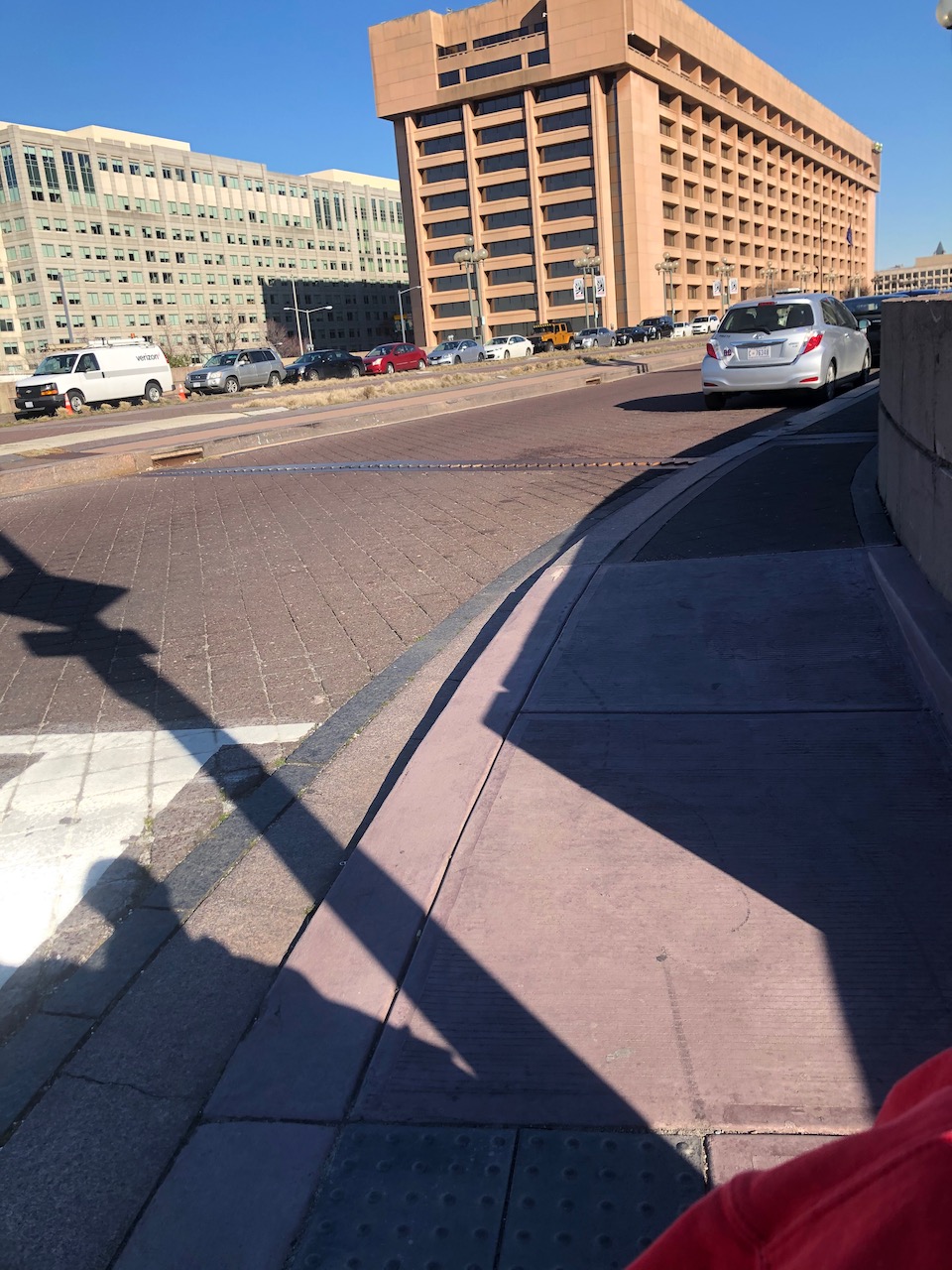 The way that was the shortest for us to walk there was to end up coming from the south near The Wharf, which meant going up a big hill. I had been this way before on my own and knew there was a reason I needed to remember if I ever took Mik this way. I thought it was just about it being steep, but it was actually that you have to remember to cross over to the middle when you get to the top as the sidewalk on the side is not really meant for walking and thus we had to back up to get back to the crosswalk when we realized it was too narrow to go that way. 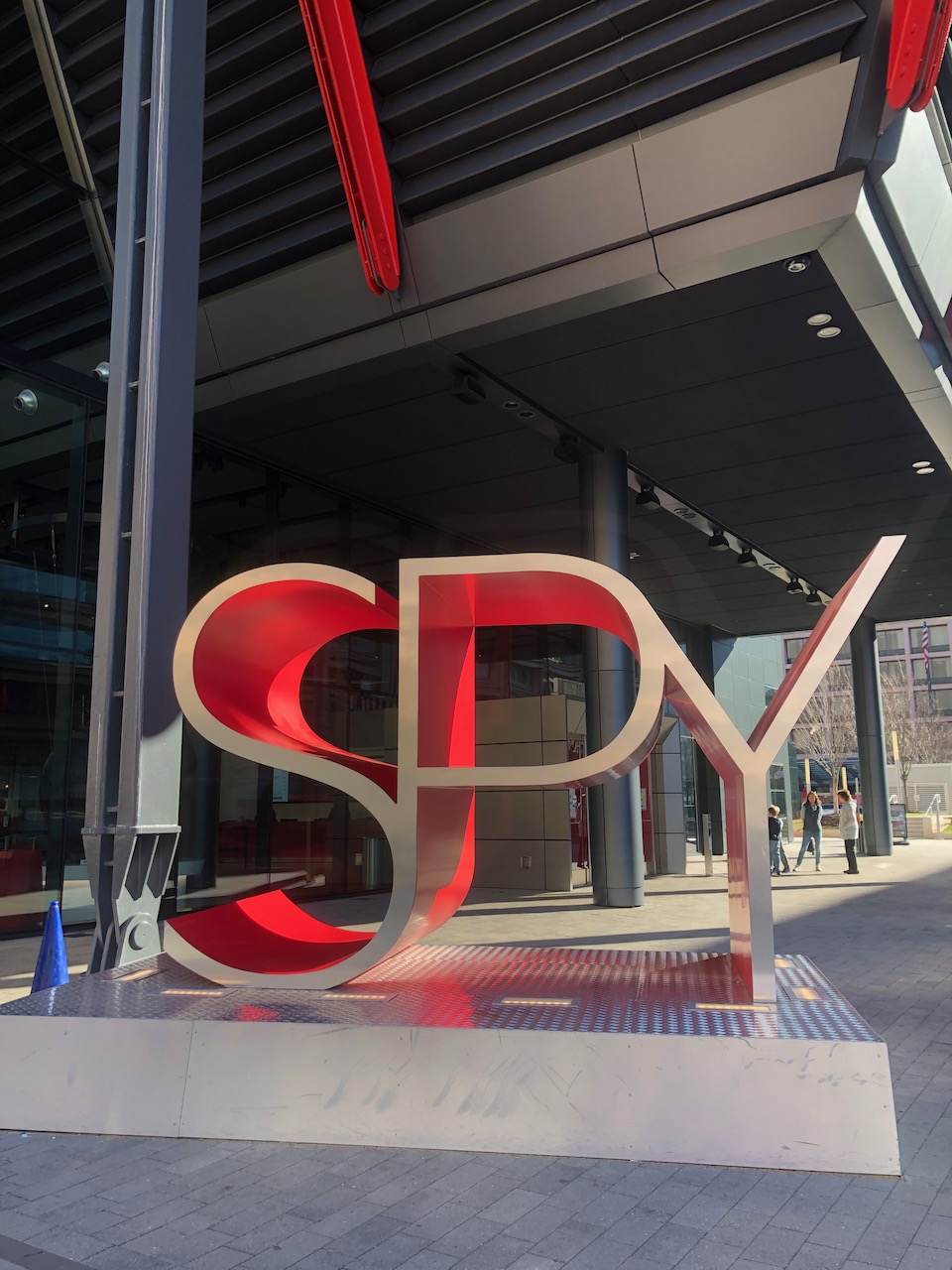 The museum visit starts with everyone taking elevators up to the 5th floor. They direct wheelchairs straight ahead instead of entering the queue for the elevator. I guess it makes sense compared to having to wind through the queue, but really it feels unnecessary to end up then skipping to the front of the line when the elevators are part of the normal museum experience. 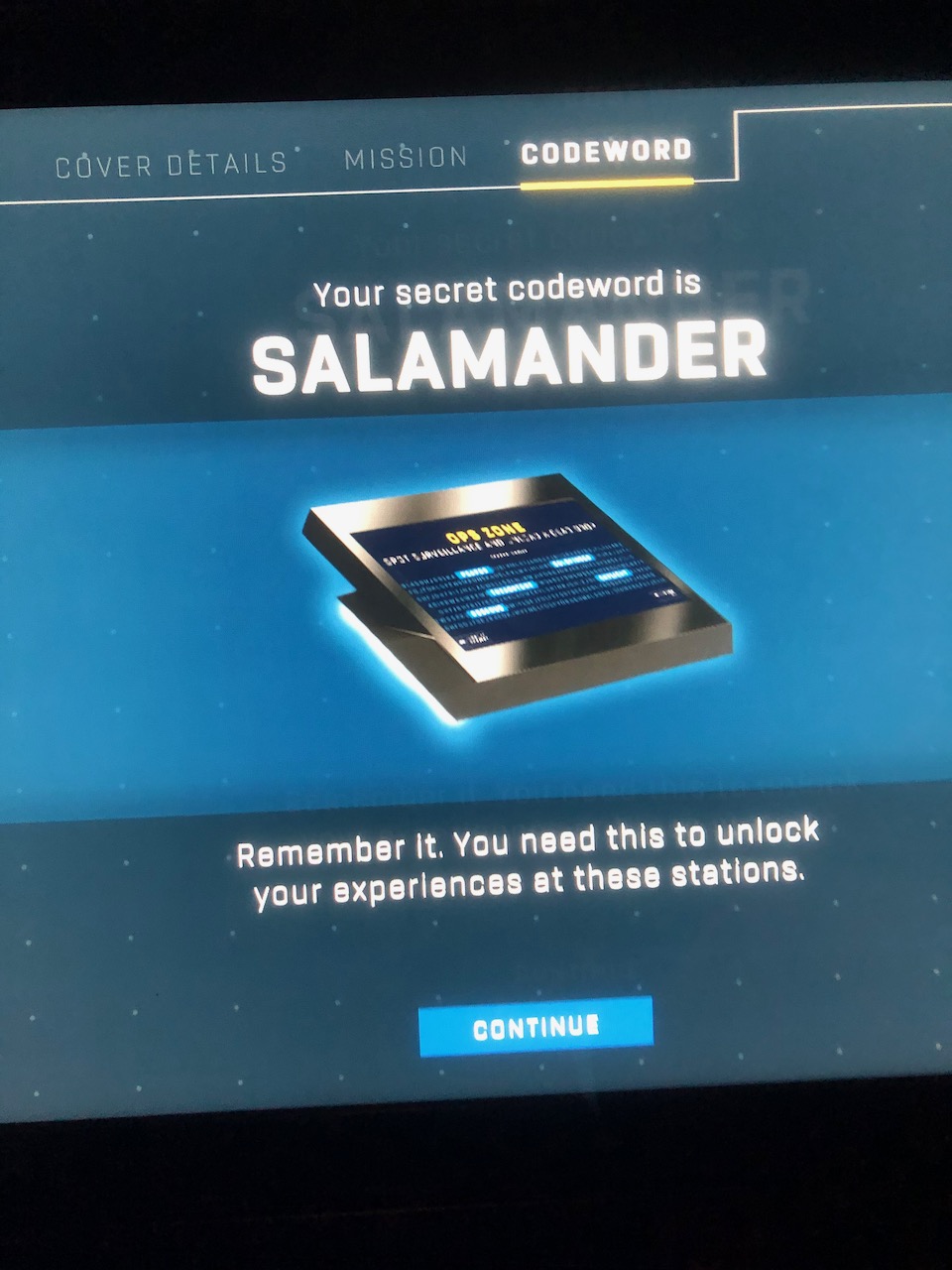 You exit the elevators into the Briefing Center. Here you get your cover, which you can then use at various kiosks throughout the museum to have a spy experience. In theory, this sounded interesting, but we ended up skipping almost all of them because Mik didn't have the patience to wait 15 minutes for a screen to open up to use at most of the spots. 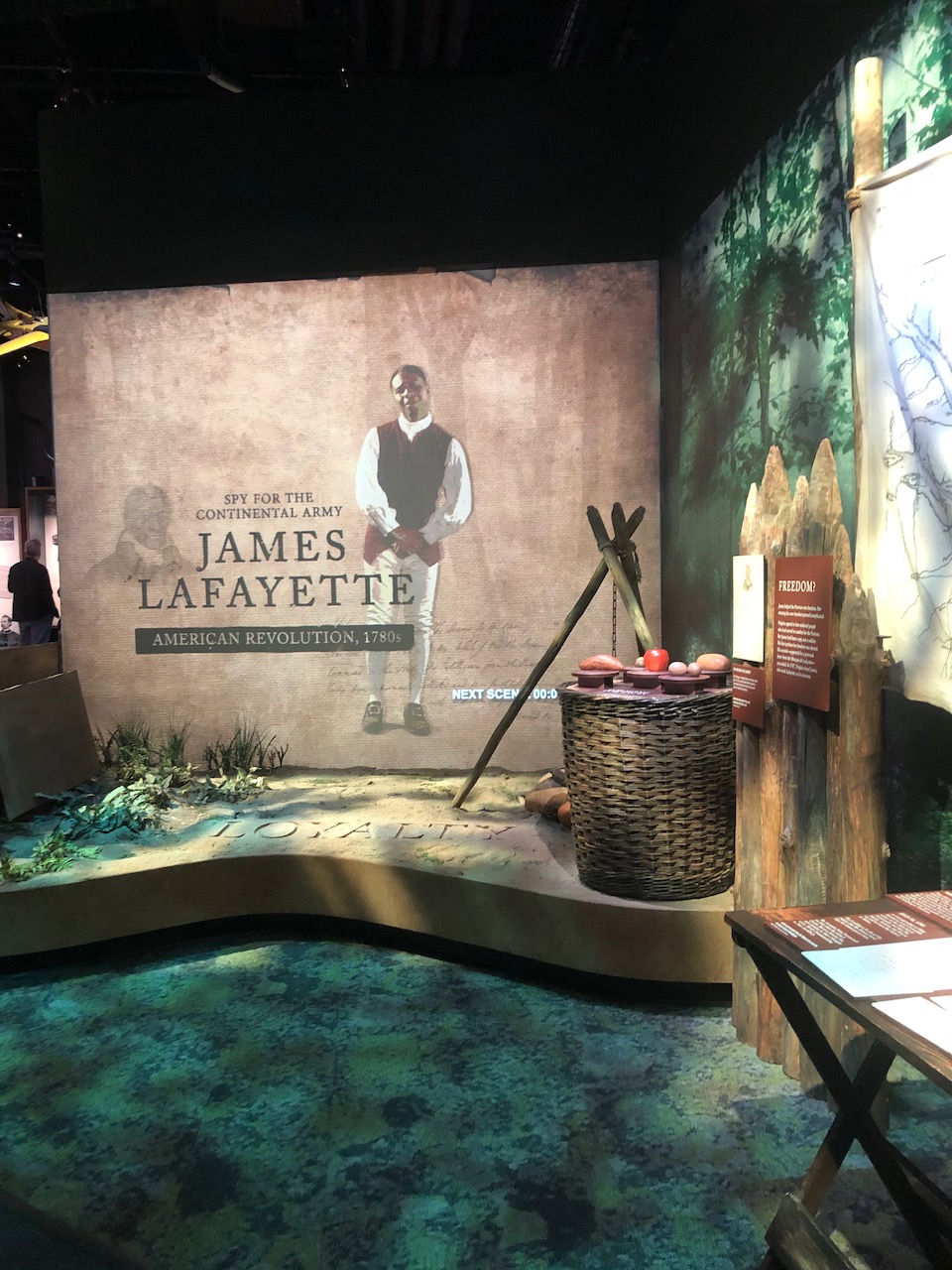 After a Briefing Film, you enter the exhibits. The first area had some interesting displays that showed videos featuring stories about some spies in history. This ended up being one of our favorite parts of the museum. 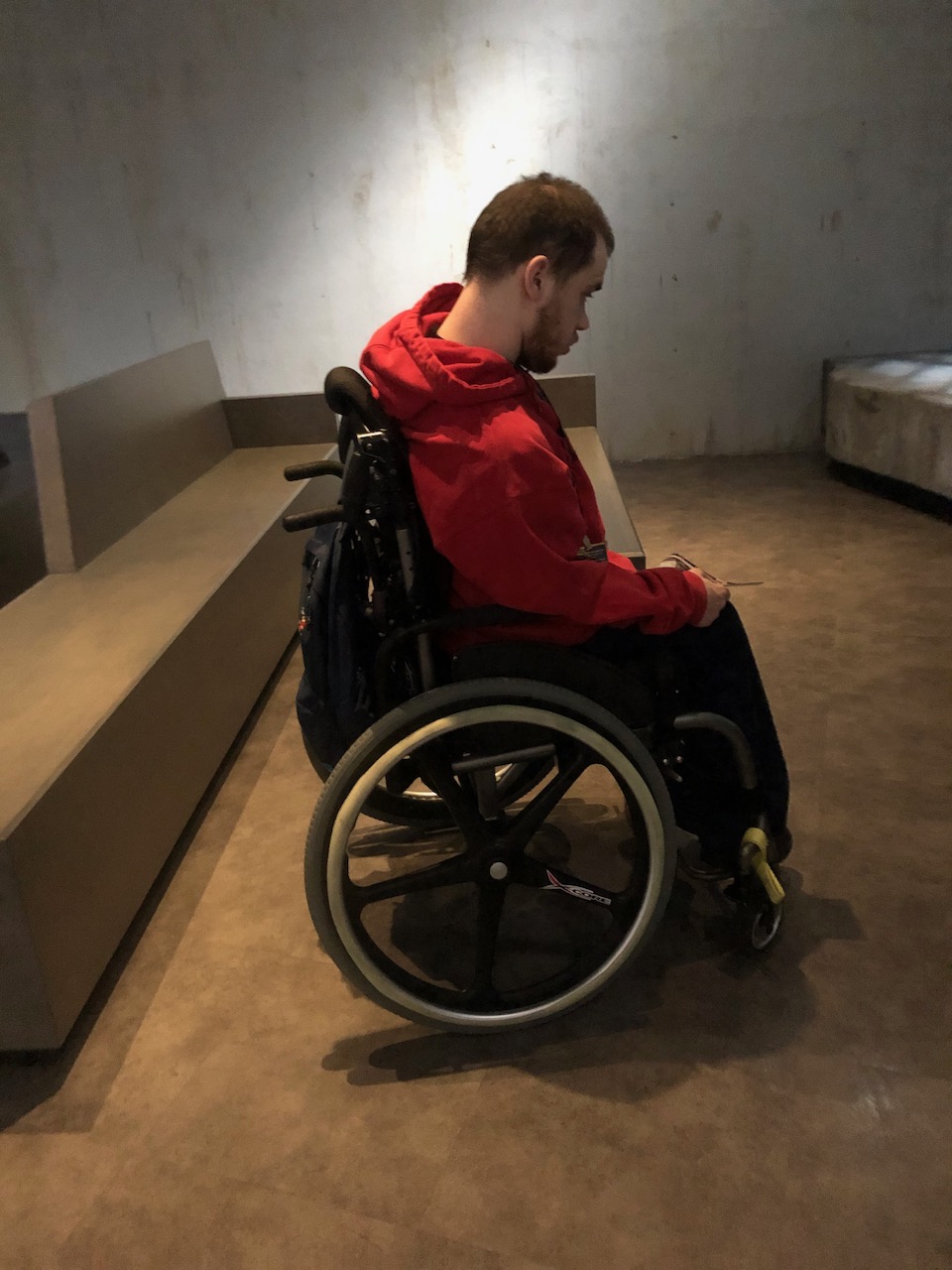 Mik, in particular, enjoyed the area in the back that had a film called "Agents & Handlers," which had a nice bench style seating with an area for him to roll up next to nicely. 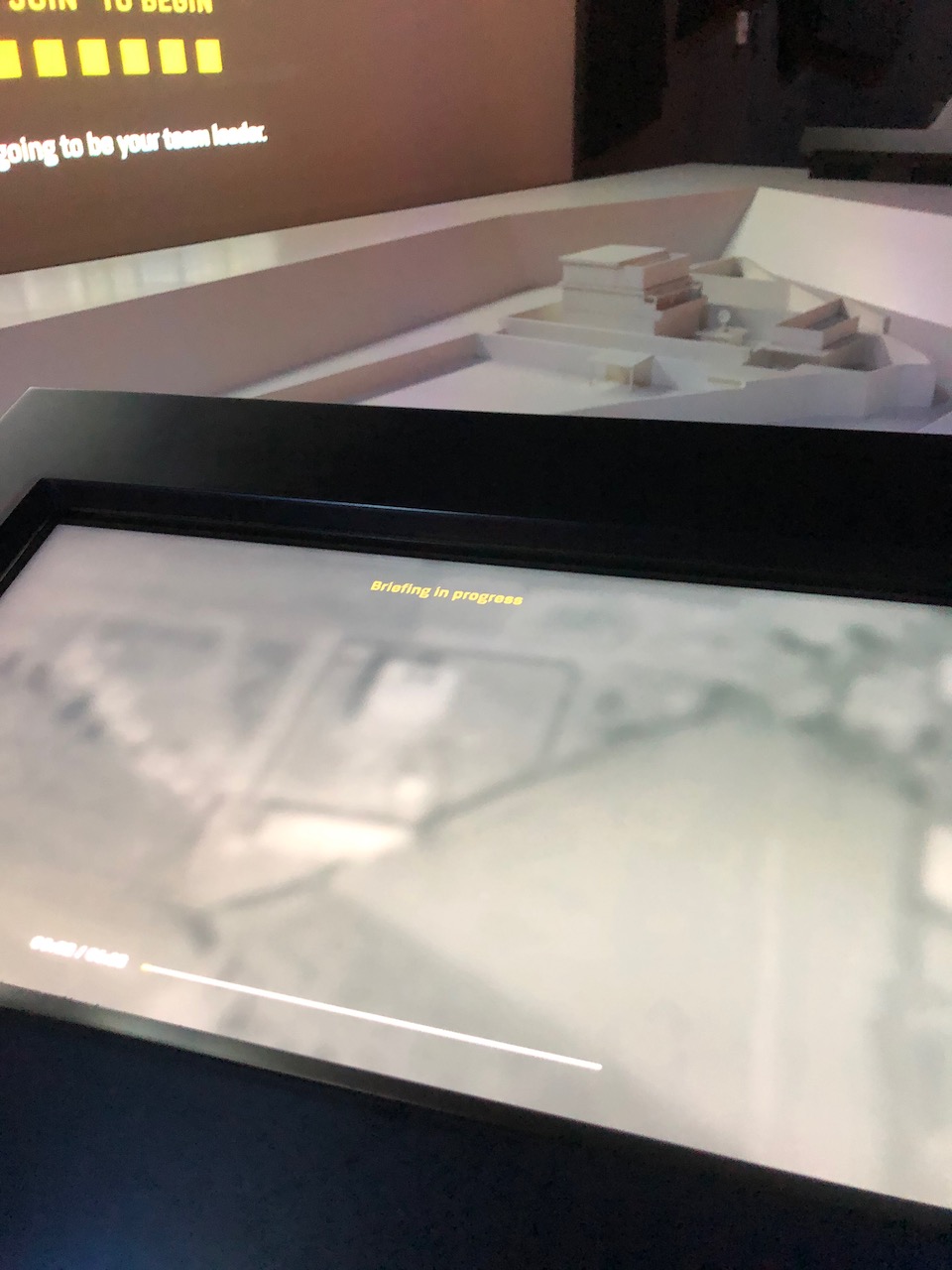 The one interactive thing we were able to do without waiting too long for a turn was the Decision Room. This was an interesting reenactment of analyzing intel to find a terrorist leader. 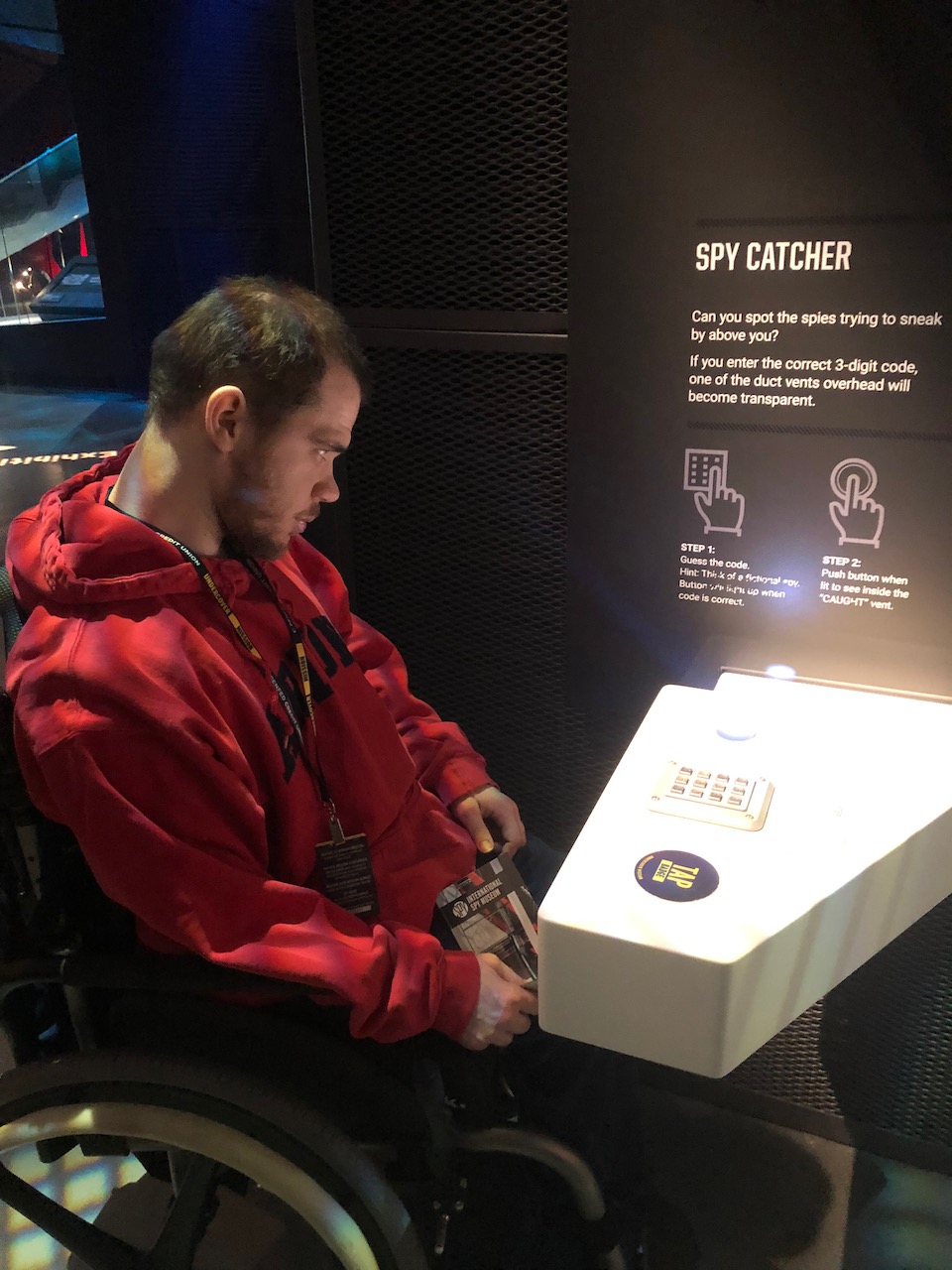 There was some interesting things in the Covert Action area. Mik tried out the Spy Catcher, which was a button that you pushed to "catch" the people trying to discreetly crawl in the ducts above. 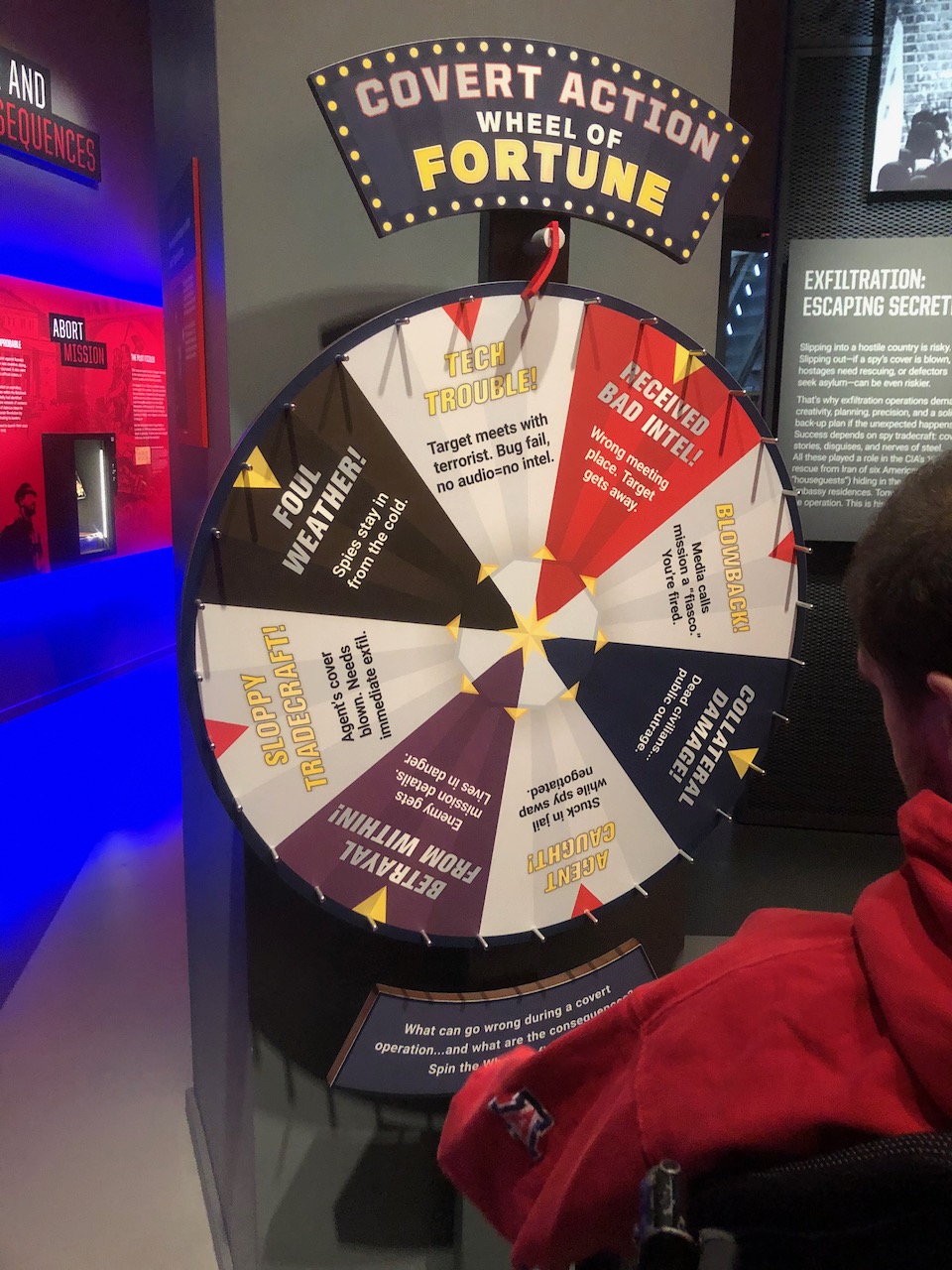 We both also ended up with the same thing when we spun the Covert Action Wheel of Fortune. 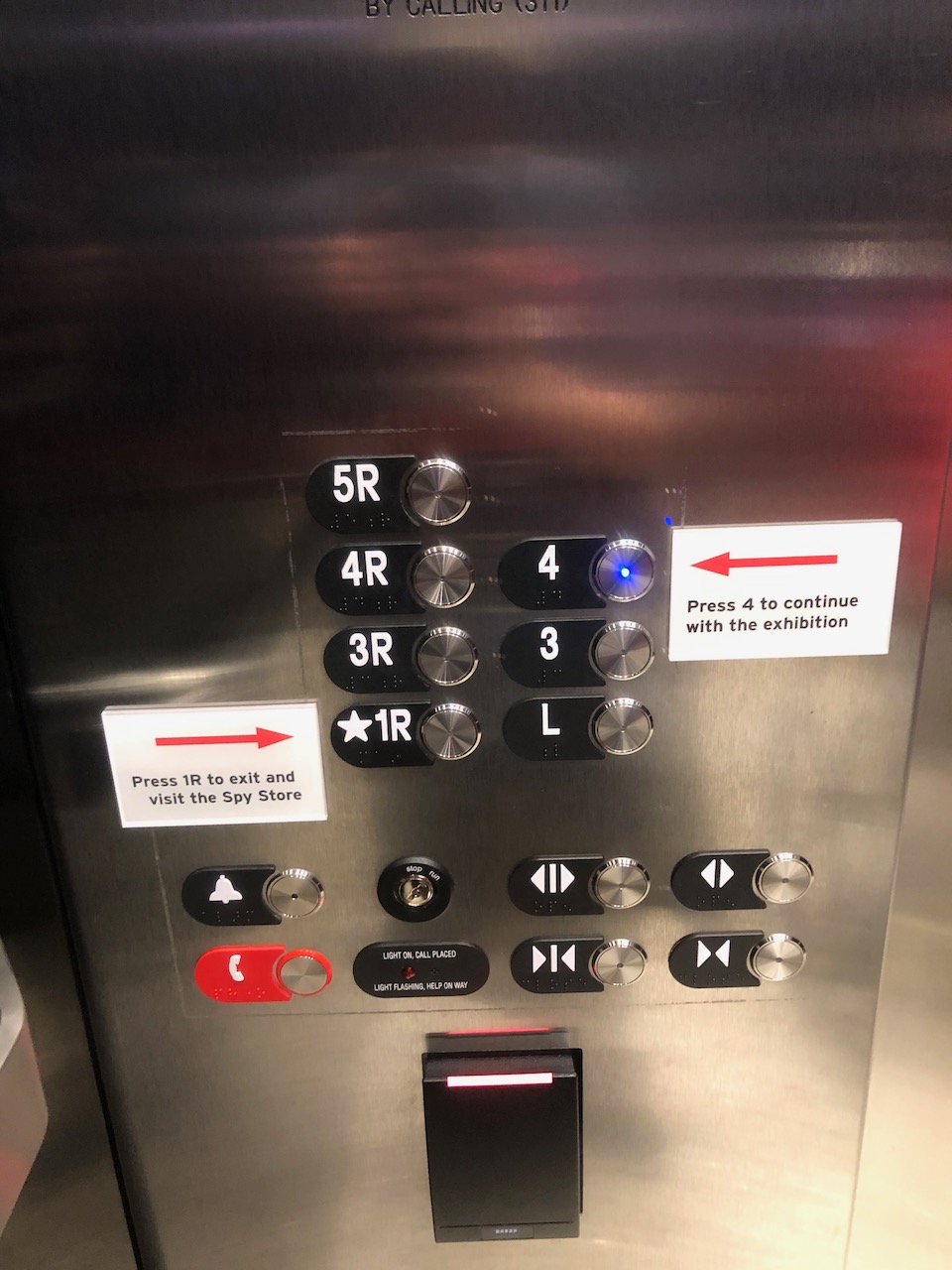 After the Covert Action area, the exhibits continue by going down to the 4th floor. The elevator is well-labelled for whether you're headed to the rest of the exhibits or using it for when you're done to get back to the first level. 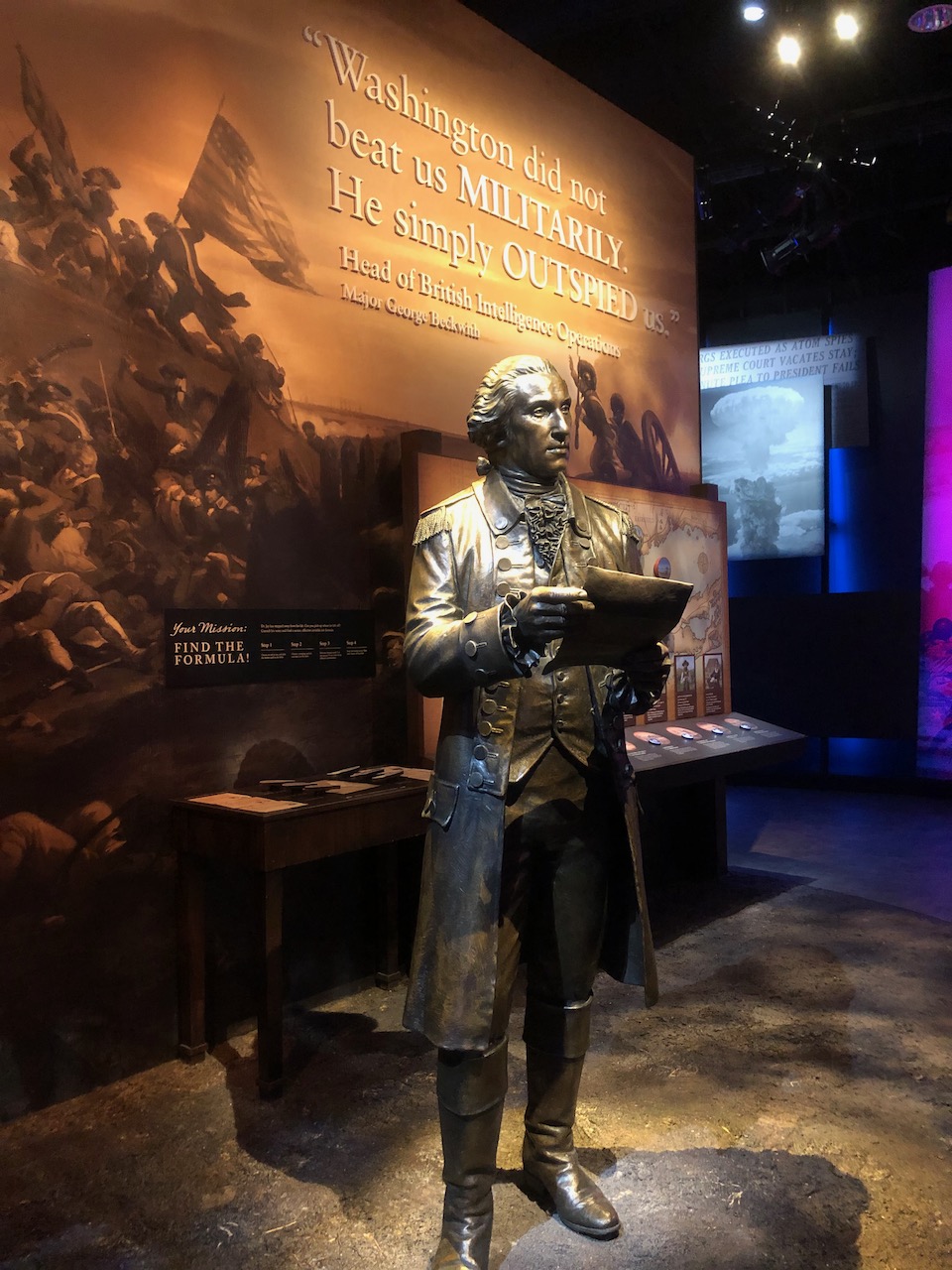 We found the George Washington and American Revolution exhibit area interesting except Mik was disappointed that the area around George was unlevel and he couldn't really get to the interactive "Find the Formula" part. 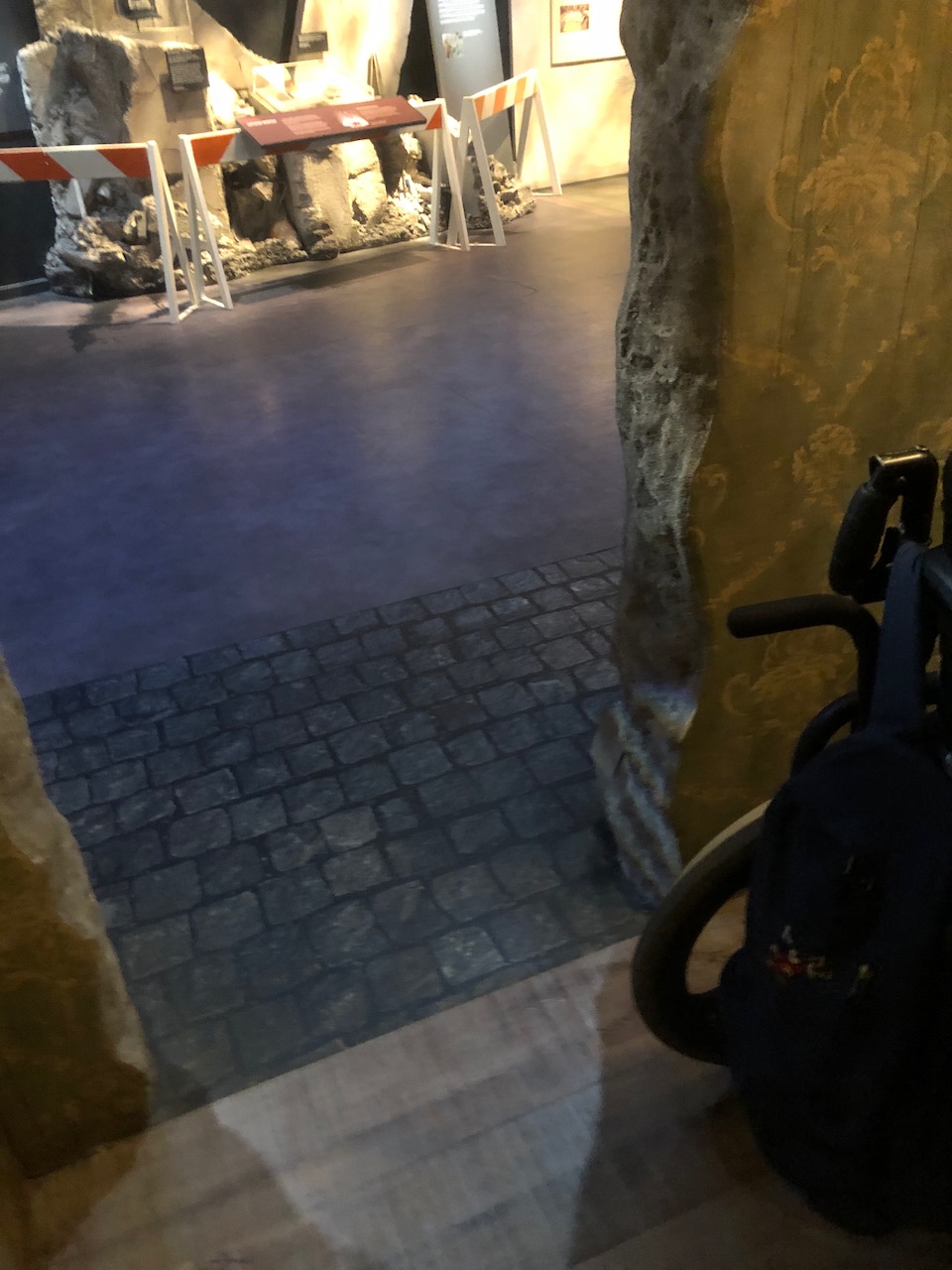 Our favorite part of the whole museum was the Cold War Berlin area. It really reminded me of the Warsaw Rising Museum and the sewer part, which after I went to last year with grandpa mostly using a wheelchair is finally on Mik's list of things he wants to do.

Overall we enjoyed the International Spy Museum. However, it was annoying that we couldn't experience the interactive Undercover Mission part without waiting at least 10 minutes in each area and it was definitely a light crowd day, so I can't imagine how it works out as worthwhile for anyone when they actually have groups and such in there. Glad we finally got there, but certainly if we're going to pay for a museum we'd rather go to the National Building Museum (we actually pay to be members even though we end up going once a year at most...) or even the Museum of the Bible (not necessarily worth going again, but certainly worth visiting once).