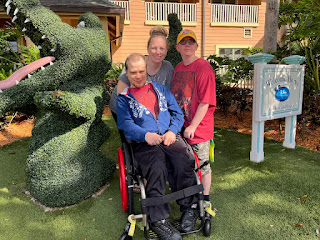 To try something different, we stayed at Disney's Vero Beach instead of a Walt Disney World resort for our annual family trip this year.

Mik and I stayed in the studio part of the lock-off, which was accessible with grab bars, but had a tub. Only having the roll-in shower in the one bedroom was not a big deal as we just need it once or twice a trip. Unfortunately, the layout of the studio bathroom was such that Mik could not use it on his own. This was partially due to the grab bar only being on the right side, but it was also due to the path into the bathroom being by the toilet so we could not leave his wheelchair next to the toilet like we usually do for him to have something else to hold on to. 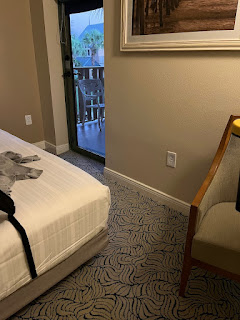 The studio was also immediately disappointing in that it is the smallest studio or hotel room we've ever encountered. I cannot imagine how one would use the room if you needed to fold out the couch into a bed as there is barely enough of a path through the room as is including you have to move the chair to be in the way of other paths in order to maybe fit by the bed and go out on the patio.

The other major issue is that there is pretty much nowhere to unpack and put your things as there is just eight about shoe size drawers to put your clothes in the dresser under the TV and just a little more room in the nightstand between the couch and bed. Then there was no where to put suitcases, but at least we had packed in a bag that rolls up and could use the couch as the place for the storage container we use for food, etc. I guess we may have been able to have some space in the closet if we asked them to take away the vacuum and crib, but it was very shallow and wouldn't have been of use for us. 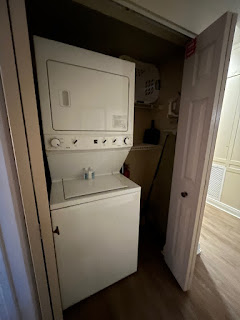 The one bedroom side was better, but also lacked storage for the living room. Although in this case you do have some room in the laundry closet and we found a storage chest in the bedroom that we could move to give some drawers and a place to put a suitcase. 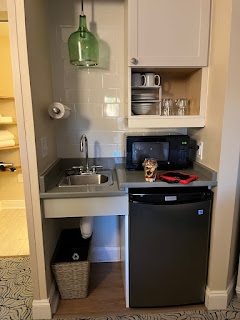 The kitchen area for the studio was also rather small. I guess a non-accessible might have the microwave up that shelf, but as it did not the coffee pot ended up on the table making for even less surface area to put stuff. 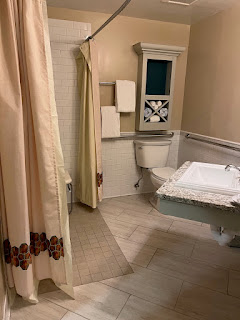 The bathroom on the one bedroom side was better for Mik as the grab bar was on the left and he could use it. However, it was still an awkward set up with there barely being enough of a path between the sink and the shower. The sink being so close in front of the toilet also made it difficult to be able to help Mik without bumping your back on the sink. 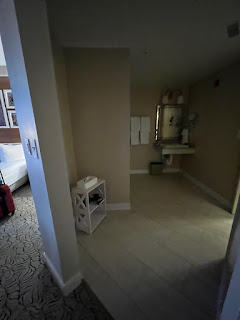 The tub area of that bathroom was huge, though. Really seems they could have better used the space from this area to make the toilet area not such a hazard. 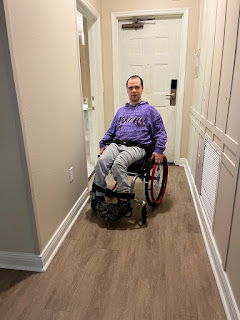 Mik did enjoy that the one bedroom only had carpet in the bedroom, so it was easy to roll around. 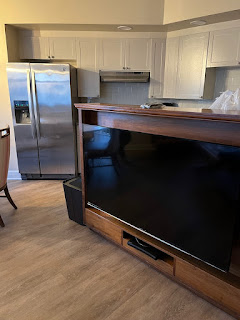 Mik also liked the huge TV in the living room. The design also gave a good amount of counter space and storage behind it in the kitchen, which was one area that did have adequate storage. In particular, we liked the fridge having ice and water in the door, although the water dispensing was extremely slow. We also had an issue with the light flickering every time we opened the fridge or freezer, but maintenance quickly fixed it once we remembered to report it on day three or so. 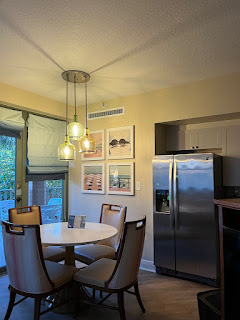 The dining room table was slightly disappointing to us as the circle shape made it hard to play Wingpsan. The light, however, can be a real hazard. On one of our last nights, Josh bumped it with his head when sitting down and the glass broke when it hit against another bulb. That was actually our third encounter with maintenance (the second had been fixing the toilet paper holder coming lose in the bathroom). Apparently, the lights breaking happens regularly as it probably the best example of the poor design choices here. Also, we had to throw away two Dole whips due to the potential for glass ending up in them and they had replacements sent up to us. 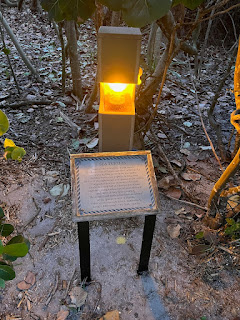 Mik mostly spent the trip in the room as he was not into the beach, pool, or the nature reserves we went to for birdwatching. However, he did enjoy taking a walk one day and reading the info signs about turtles and some area history on the main path between the buildings. 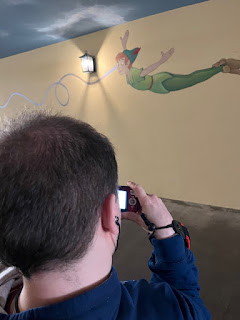 We also enjoyed taking the walkway that goes under the street to access a treasure trail (not accessible as it is sandy and has parts even I had to duck to get through) and sports facilities (basketball, soccer, beach volleyball, tennis). The walkway is fun because it has Peter Pan characters painted on the wall and during the day the speakers play "You Can Fly!" 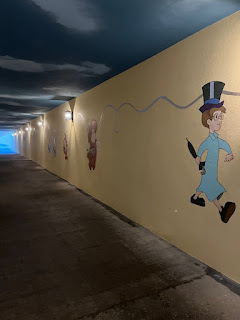 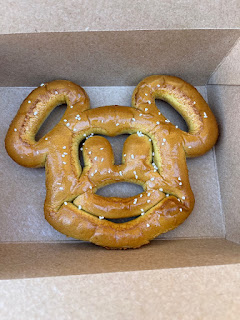 As a non-park vacation, we thought we would actually cook in the room more than usual. However, instead we found ourselves enjoying the quick service for lunch and almost all dinners as they had several rotating dinner specials that appealed to us. We also enjoyed being able to get Mickey pretzels and Dole whips, especially the Key Lime. Mik was disappointed, though, that they did not have Mickey waffles. We also found that the staff got to know you more like when you go on a cruise, which is not something we've ever experienced at the Walt Disney World resorts (probably mainly because we just do not spend much time at the resort beyond our room there). 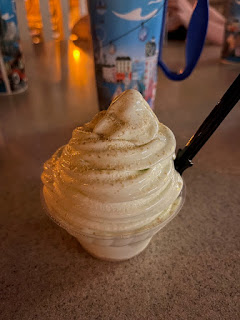 Overall the family enjoyed the trip as a less structured and more relaxing vacation than doing the parks has become. We found the activities at the resort were fun including origami, mini golf, and checking out DVDs. In particular, I also enjoyed walking around the nature area across the street. Nora really enjoyed the water slide competitions. One night, the beach at the resort was also a great place to be able to see a SpaceX launch. 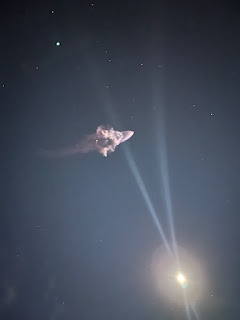 Although, we did not particularly like the room design, we would like to return and may even do it next year.