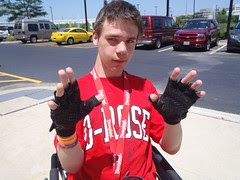 Mik had been looking forward to the Abilities Expo in Chicago for months.  He found some cool stuff, but overall was rather disappointed.  It was rather small and really did not have that much different things.  He was especially disappointed that they did not have the Wijits to try.  Several of the vendors commented that this was smaller than the others and of course the Wijit people had been at every other one.  They had something similar and to some extent better, but it was gears that you switch down in the hubs, which is useless to Mik because he cannot even do the bending down to get the range of motion needed to really propel himself. 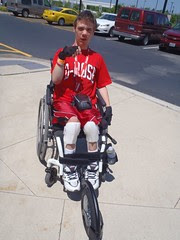 Mik did have one big find and splurge that he sure wish he had at the beginning of our summer vacation.  It is the Free Wheel.  It is a big wheel that attaches to the footplate and lifts the casters up.  It is pretty easy to take on and off.  Not sure if Mik will be able to learn to do it, but that's okay, as he could not twist due to his spinal fusion to put it on the bracket on the back of the chair anyways.  However, it is something he can easily tell a friend or someone to help him with, although currently he does not have the thing to carry it on his wheelchair because of course the Q7 disappoints again in that it has a special shape.  They are making us the right size thing to go on there and it should get to his house about the time we get home from vacation early August, so at least he will have it all set up for school.

The Free Wheel makes going over bumps and even down big curbs easy.   Mik is excited to try it out for going to school because the sidewalks in our neighborhood are old and ever since he has had his Q7 the front wheels have made it even harder for him to get there and back than with his old chair.  It also helps him go straighter, so he should not be calling me to come help him because he rolled off into the gravel and cannot get back on because even if he does the Free Wheel makes it so he can get back up on his own.  Not to mention it adds stability that should keep him from all his falls he ends up with from the transitions on the ramps at school.

It certainly is not that great indoors, but it will definitely come in handy for Mik, especially since now he could much more easily do the trails that we have borderline considered at the National Parks.  Of course, it still would not have saved him from flipping over sideways on the Circle Trail.  You probably need a high end special sports chair for that! 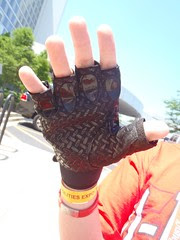 Mik also got some really nice gloves.  He has tried a lot of different ones over the years and has never stuck with a pair for more than a day, but he has now worn these new ones twice and still loves them, so that is really saying something.  They are fingerless.  What he really likes is they have grip that reminds me of the material those rubber circle jar opener things are made out of.  They do not so much help him roll any better, but he does love that he can now open soda and especially Gatorade bottles much easier.  Plus, he cannot wait to try them for weight lifting and pull ups.