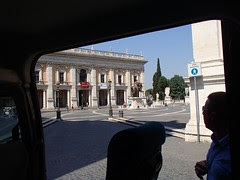 Mik’s first port adventure for the cruise was from Civitavecchia. We decided not to do the first two ports because it required using the tender boat and it was unclear if it would require a transfer. Turned out Villefranche would have been no problem other than it is quite hilly to go around too much in the port town. The gangways up in La Spezia, though, were too narrow at the top and would have likely required carrying Mik and the chair on separately.

Mik did not much care about missing the stuff from La Spezia, but he would have liked to see Monaco. However, he really did love having his first two days basically as at sea days compared to all the people we overheard saying they wished the first at sea day came before the three days of port calls to give more time to adjust to the time and get settled on the ship.


Mik and Mom did only the 4-hour private vehicle w/ lift port adventure. All along we were warned it would only allow time for a panoramic tour, which was fine with Mik and Mom since 4 hours is about their limit on touring, as they are the ones that always prefer the at the hotel/cruise ship parts of vacation and not long days of seeing stuff like Dad and I. Also, it was flexible enough that they could have stayed out longer and just paid for the extra time if they ended up finding something they wanted to spend more time at or wanted to see more things.

The ride between Rome and the port is about an hour to 90 minutes, so that does take up a big chunk of the 4-hour private vehicle tour in Rome. However, they still saw more different parts of Rome than Dad and I saw in our 10.5 hour tour, although that was because we spent most of our time in the Vatican and the other time was just seeing the inside of the Coliseum. Mik and Mom still got to see the outside of both, which while the insides are at least partially accessible Mik probably would not have enjoyed inside much because of the crowds. 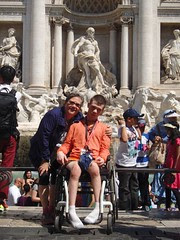 During their tour, they mostly viewed stuff from the vehicle, but the driver would stop and open the side door to give a better view. They did get out once, though. They parked about a block from the Trevi Fountain and the driver even pushed Mik to it. He then took a picture of Mom and Mik in front of the fountain. Mik was totally excited to hear when we got back that he went to something I have never been. 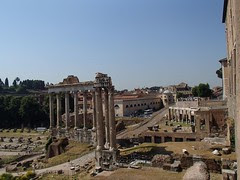 One of the coolest parts of the tour for them was that they got to drive around/close to the Capital Hill and Forum area that you normally have to walk through. Mik also liked that the way they tied down the chair made it feel very secure, which really has to be saying something with the way driving and traffic in Rome can be crazy.
Posted by wildcat1001 at 4:42 PM