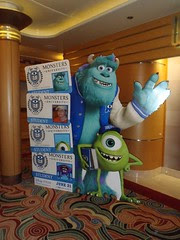 The Monsters University movie was released in theaters during our cruise and they showed it in the Walt Disney Theater and Buena Vista Theater at 12:01 a.m. for a PremEAR at Sea 7 hours before it was even midnight opening day in the United States. It was shown again many times in the Buena Vista and even though the next day was a port day, we decided to go to the PremEAR because it did not coincide with anything else. The 3D option was only in the Walt Disney Theater, so we decided to watch it there. In hindsight, the 2D in the Buena Vista would have probably been more enjoyable.

The main issue with watching a movie in the Walt Disny Theater is the only wheelchair seating is in the back and it is not in the center. This means you are off center and quite far from the screen. Overall that would not have been a problem, but they never closed all the doors in the back and light came through causing reflections in the 3D glasses. 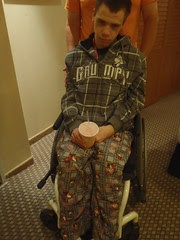 Mik did not have too much of a problem, though, as right before the movie he asked for a sweatshirt and we gave him his birthday present a few days early, since we had only packed the hoodie Grumpy sweatshirt that was his gift. The hood is fluffy soft and he was wearing it up before the movie even started and it ended up being quite useful for him to enjoy the movie. He was glad we saw it for free, though, as otherwise it was not really worth it in his opinion (he sort of thought it was a sequel, but it’s a prequel).
Posted by wildcat1001 at 4:53 PM