Our First Trip with Magic Bands 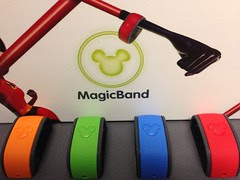 Our Walt Disney World Marathon weekend trip was the first time we got to try out the Magic Band technology.  I liked them from the start because we were able to choose our colors and actually add our annual pass to it easily before we left.

The Magic Band is great for when entering the room, as you don't have to dig out your key to the world card and it is hands free.  It was especially useful this trip since we were on the Club level at Animal Kingdom villas and needed it to take the elevator to our floor.

Mik found it as much trouble as ever for entering the theme parks.  He did not have too much trounble holding it up to the Mickey, but we did have to make sure we went to the ones that were on the same side as the hand he was wearing it on because he couldn't reach across himself and put it up to it.  They had to reset his fingerprint every other time, though, as it never matched since he is unable to get his finger to consistently be on the reader.  It is not that big a deal, but kind of annoying they recommend putting someone else's finger on it instead because that would lead to just as much trouble since some trips Dad and I switch up who takes him to the park and then you don't have the matching finger and have to reset anyways.  Bottom line Mik wishes they did it by photo like they do at Disneyland, but now that all passes work with the new technology and the parks are turnstile free the wait for someone to come do an override is just a few extra seconds usually. 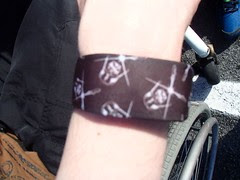 The other issue Mik had with the Magic Bands was that he didn't like the feel of it.  That we fixed by purchasing a fabric band that it fits in.  He especially liked that because we found some Star Wars ones 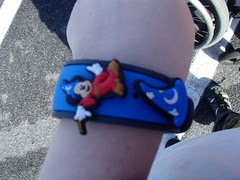 Dad and I enjoyed adding Sorcerer Mickey charms I bought in a 3 pack.

Overall Dad and I like the Magic Bands.  It was especially good for the marathon because it was much easier to run with than a key to the world card, which he would have needed to get back up to the room if he didn't have the magic band.  However, Mik's magic band began to drive me nuts by the end because he kept ending up playing with it and causing it to become undone.  I'm not worried about losing it in general because he always has annual pass for the park and is with us to get back in room, but if certainly will not put charging privileges on his in the future due to it being easy for him to lose, although even to charge one would still need to know your pin, so mainly would just be a minor inconvenience to lose.