Walt Disney World: Magic Kingdom - Under the Sea Journey of the Little Mermaid

While this ride has been open our past couple trips to Walt Disney World, we have always skipped it because the line is long and we have enjoyed it regularly at Disney's California Adventure.  This trip we decided to try it out at the Magic Kingdom finally because we could choose it as one of our Fastpass+ options.  In the end, though, we got to the park for 8 a.m. Extra Magic Hours and just went through the regular queue instead of waiting over an hour for our Fastpass+ time. 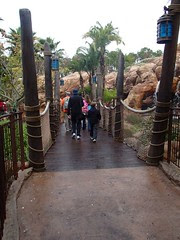 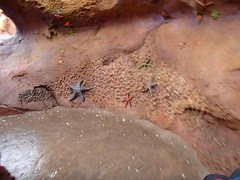 We really enjoyed the queue and actually would not have minded if there had been a wait, as there is a lot to see and it's nicely themed for the ride.  We only got to just walk straight through it, though, since the only wait was after we got to the front and were directed to the wheelchair area to wait for the wheelchair accessible vehicle to come around. 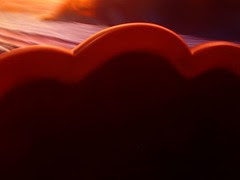 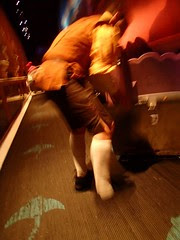 For the most the ride is exactly the same as at Disney's California Adventure.  However, there is one huge difference.  The wheelchair vehicle is actually a clam like the rest of the vehicles except it does not have a tall back.  It did seem roomier than the accessible vehicle at Disney's California Adventure, but we really like the King Triton's chariot theming of that one better (also, have heard that one referred to as the wave vehicle).  This Magic Kingdom one just ends up looking like an odd clam.  Overall same ride experience, though, and it is nice that they can efficiently load wheelchairs and only slow down the ride rather than have to stop it.

Destination Info:
Under the Sea - Journey of the Little Mermaid
Magic Kingdom
Lake Buena Vista, FL
Posted by wildcat1001 at 10:03 AM