Even though we aren't really familiar with the current animated shows on the Disney Channel and Disney XD, we thought this would be an interesting panel because it said there would be a peek at some new shows. Well, it did end up being an interesting panel and glad we did it, but kind of disappointed it was only a sneak peek at a show (Pickle & Peanut) and not shows. 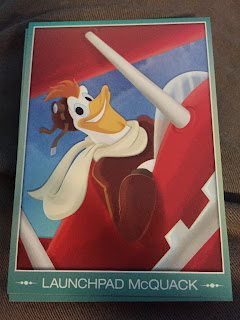 Mostly, though, I was just excited they handed out the Launchpad McQuack card for the trading card set being distributed at the D23 Expo. That was the one card I really wanted to get and I told Mik before the panel that if it's going to be a special one they hand out, this was the panel it was going to happen at. Not sure if they handed it out another time, but I was right and Mik was glad we could stop having to worry about finding it because I was kind of driving him nuts wanting to get it.