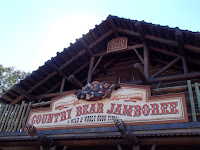 Finally got Mik to see the Country Bear Jamboree this trip. He enjoyed the show for the most part, but didn't like the wheelchair seating only being up front, especially afterwards when he realized it resulted in him missing one entire segment. 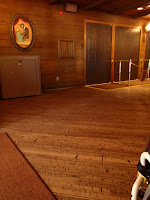 To enter the show there are turnstiles. We were confused what to do because unlike most attractions with turnstiles there is not an area right there with a rope and a wheelchair symbol to know where to go. After a few minutes a cast member showed us over to another door around to the left that leads you inside to wait in a separate part of the lobby for the doors to open. 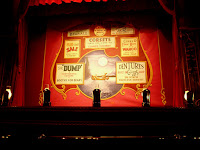 The only option for wheelchairs is to sit in the front row. Since usually you end up in the back, it is kind of a nice change from most shows. However, for this show in particular it means enjoying some of the best parts is hard to impossible to do. 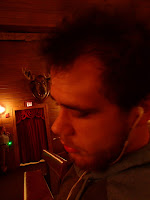 One part I wasn't sure Mik would be able to enjoy was the animal heads on the wall to the right. Once I pointed them out to Mik, he did glance at them, but you don't really get the same experience when you have to remember to look back up at them as when you sit up on the higher rows. 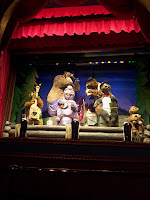 Overall Mik enjoyed the show, but when talking to him later I asked what he thought of the view of the part when the bear is singing from a swing and he didn't know what I was talking about. Turns out he was totally confused by that part of the show because he thought it was just singing with no bear to be seen because he didn't know he had to look up to see it. Not that he really missed anything because from the front all you can do is look up at her butt. 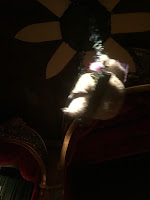