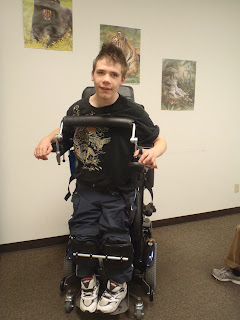 Mik got his awesome power chair that can put him in a standing position back in December 2011.  Yesterday was the first time we took it on an airplane.  We suspected it could be an adventure/misadventure, as there always seems to be a high probability of one every time we fly.

In Chicago as the boarding was finishing for our flight to DC, the gate agent came in and asked if the back can be taken off the wheelchair.  Since, we had just gate checked the manual wheelchair, I thought she was taking about it and told her there were release levers for it.  She came back a few minutes later and asked me to come show them.

I thought the manual chair was just outside the door and I would quickly help them.  Well, they then escorted me down the steps to below the plane and around to the cargo loading area.  It turned out they wanted to reduce the height of the power chair.  I do not know how they did in on the first flight, but here they were trying to not put it on its side and did not know how to make it flatter.

I have not done much playing with Mik's controls, but I knew if could lay flat since it can go laying to standing.  It took me about 5 minutes, but I figured out the recline mode and got it flat so it could go in the cargo area without being laid down.  It was then kind of funny to watch them roll it up on to the conveyor belt tilted down as they had to release the brakes to roll it up there and then of course with the brakes released it tried to roll backwards.

As usual our flight out of Chicago was delayed.  I am pretty sure it was pretty much entirely the power chair's fault, but it was nice that they cared about not putting it on its side if they could avoid it.  Now I know to lay it flat when we check it in, but I kind of liked getting the adventure of going below to see them load it.
Posted by wildcat1001 at 6:06 AM