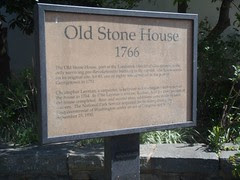 The Old Stone House is located in the Georgetown area of DC and is part of the Rock Creek Park National Park Unit.  Georgetown is the least accessible area of town partially due to the Metro not having a stop actually in it, but also because it is more historic along with hilly like the Virginia side of the river.

We walked the little over a mile to the Old Stone House from our hotel near Rosslyn.  The Foggy Bottom Metro is slightly closer, but if you really want to mostly avoid the hilliness and uneveness of M Street there is a convenient Metro bus that you can take between the Metro stations with stops regularly along M Street.

Mik was not too into the outing to the Old Stone House, as it was so bumpy on the M Street sidewalks and they are slanted towards the street, so he had trouble sitting up straight.  I suspected it was not accessible, but I somehow got the idea that you can access the first floor.  You totally can, however, it is not exactly accessible. 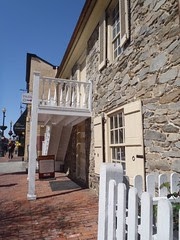 The front door is the one you are supposed to go through and once you get inside it does have a ramp down into the gift shop.  However, outside it is about a six inch tall threshold.  We started by going into the garden on the side before even looking at the front door, so when I went around to the front door and saw it was a big threshold I already knew that the one on the side did not look as bad.


I went in and asked if there was wheelchair access and the rangers looked confused (admittedly it was only one guy's second day) and said yes just this floor and I had to specifically ask if they could open the other door because it looked easier to get in using.  Basically, who would go if you cannot really see the whole house and Georgetown is not the best getting around in a wheelchair.  However, they were friendly and immediately were okay with letting us use the side door.  Only one room and a gift shop to see, but at least Mik could come inside while I got the 7 National Park Passport stamps they have here, which was our main purpose.

Overall the Old Stone House is not really a must see unless you are wandering around Georgetown in general, which is kind of interesting even if it is hilly.  By the way it is not far from the very popular DC Cupcakes featured in the TLC show.  M Street is not too bad, but boy do the hills leading north of M Street seem really really steep!!!  It was still cool to see the only house remaining in DC with its original pre-Revolution foundation and definitely worth it if you collect National Park Stamps.