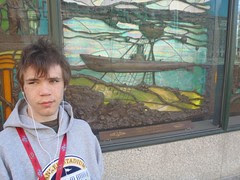 We have been to the U.S. Navy Memorial several times, but somehow never noticed that there was a U.S. Navy Memorial Heritage Center next to it.  The only reason I knew to look for it this time was that there is supposedly a National Park Passport Stamp for the memorial at the Heritage Center Bookstore.  We did not find it, but then again we did not ask about it and the whole place seemed to be in a major overhaul mode.  It must be there, though, as the day after we visited it the last confirmation date for the stamp in the Park Stamps database.

On the level you enter the U.S. Navy Memorial Heritage Center there is not much other than a ship model.  There is an elevator and stairs down to the exhibit space and bookstore/gift shop.  There was not really much to see, as they were taking stuff down and had ladders and such in a big part of the area.  The bookstore had the displays of items so close together that Mik could not get his wheelchair through most of it. 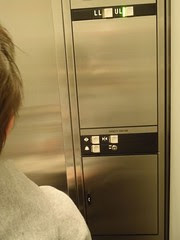 Overall we wish we had skipped the U.S. Navy Memorial Heritage Center.  Not that it does not have potential to be an interesting stop, but they were actively dismantling exhibits and there was clutter of coat racks in the elevator hallway and such.  The U.S. President's Room was interesting, but really it was not worth the visit at this time.  Now if there was not exhibit turnover going on it would be a great stop other than Mik did not like that the buttons to select the floor you wanted to go to where at about his eye level.