When we decided to book the Panama Canal cruise last summer, the only accessible staterooms available were 1-bedroom Concierge. It ended up being worthwhile for this cruise, especially as we ended up adding Dad and making it his 60th birthday celebration. 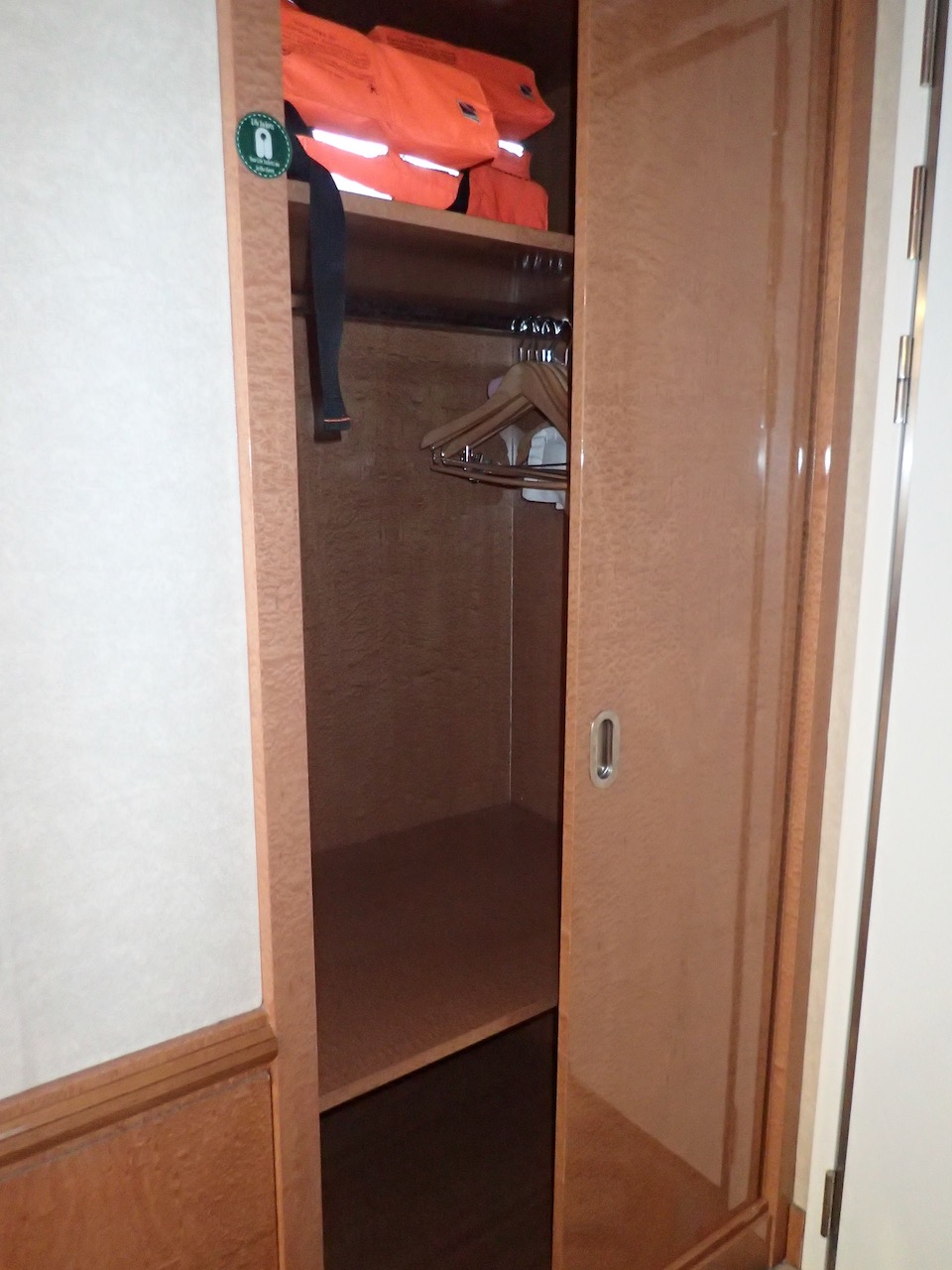 When you first come in there's a small closet. There was plenty of other closet and storage space that we didn't end up using this one at all. 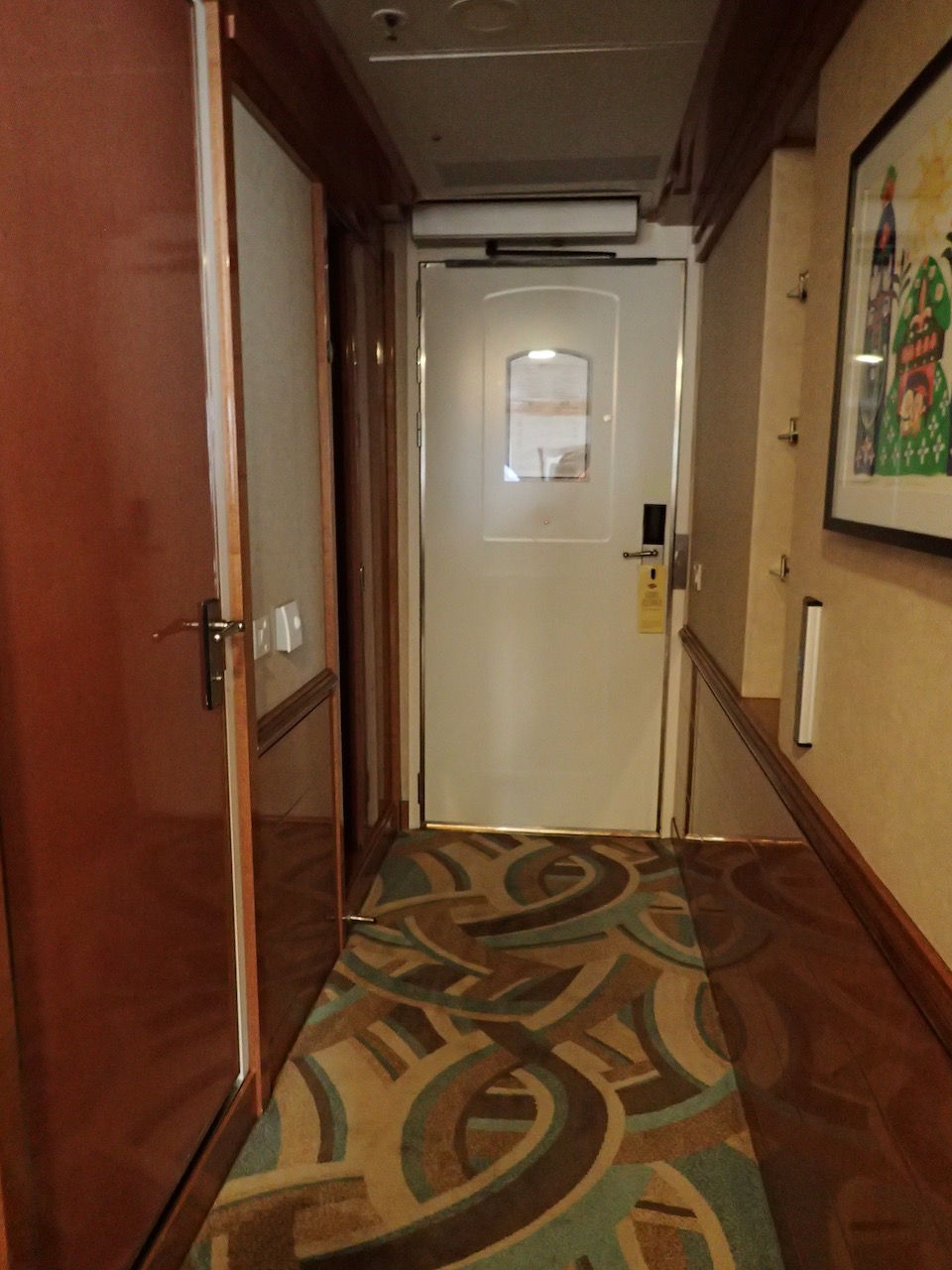 Entry Hall with bathroom to left (step up into) and a button on the right to open door (you can ask stateroom host to activate if it isn't already) when leaving your room. 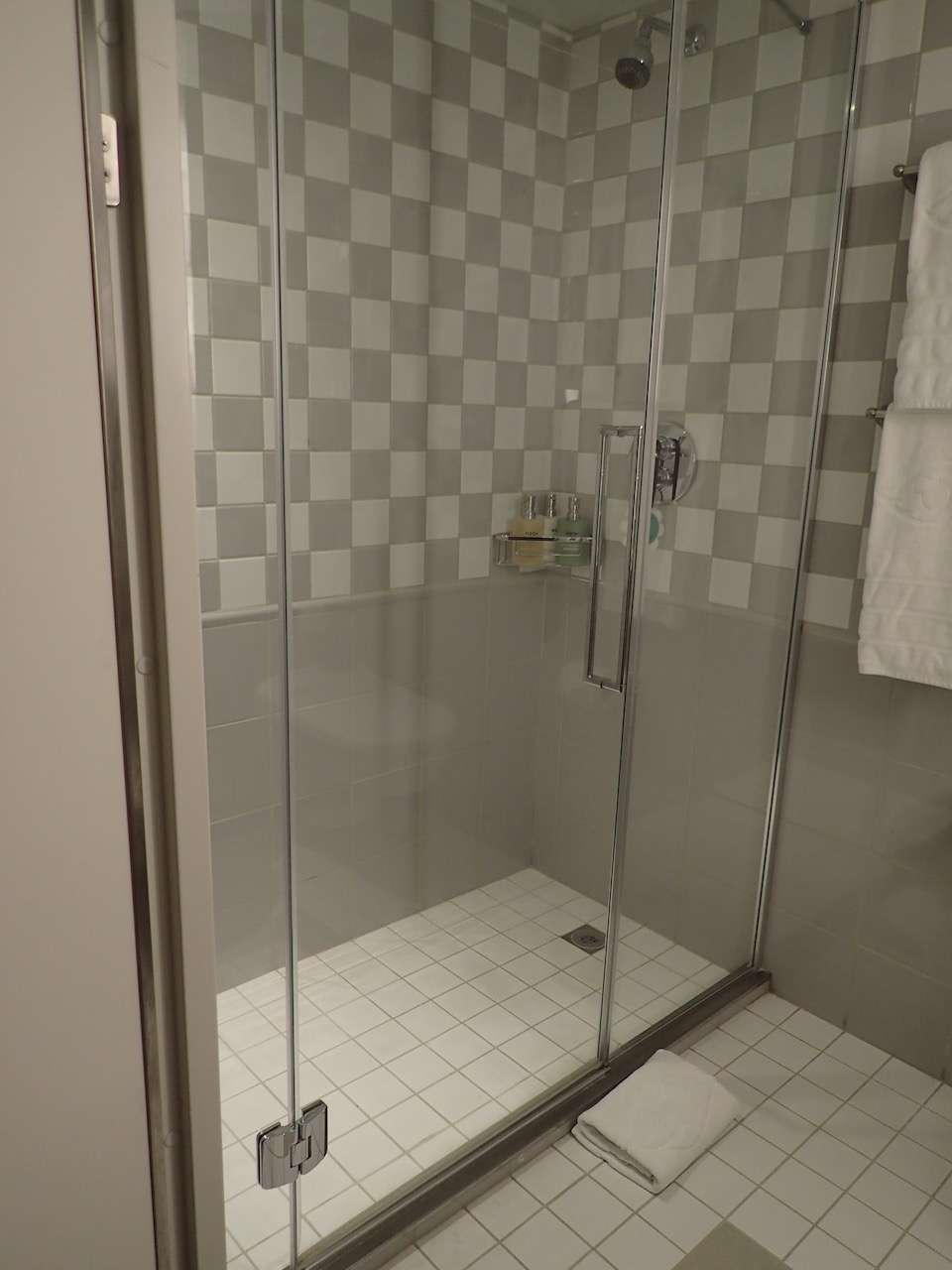 The hall bathroom isn't accessible, but was very handy for the rest of us to use. It was especially useful to have regular shower and Mik didn't have to worry about the accessible bathroom floor getting wet from us using the other one. 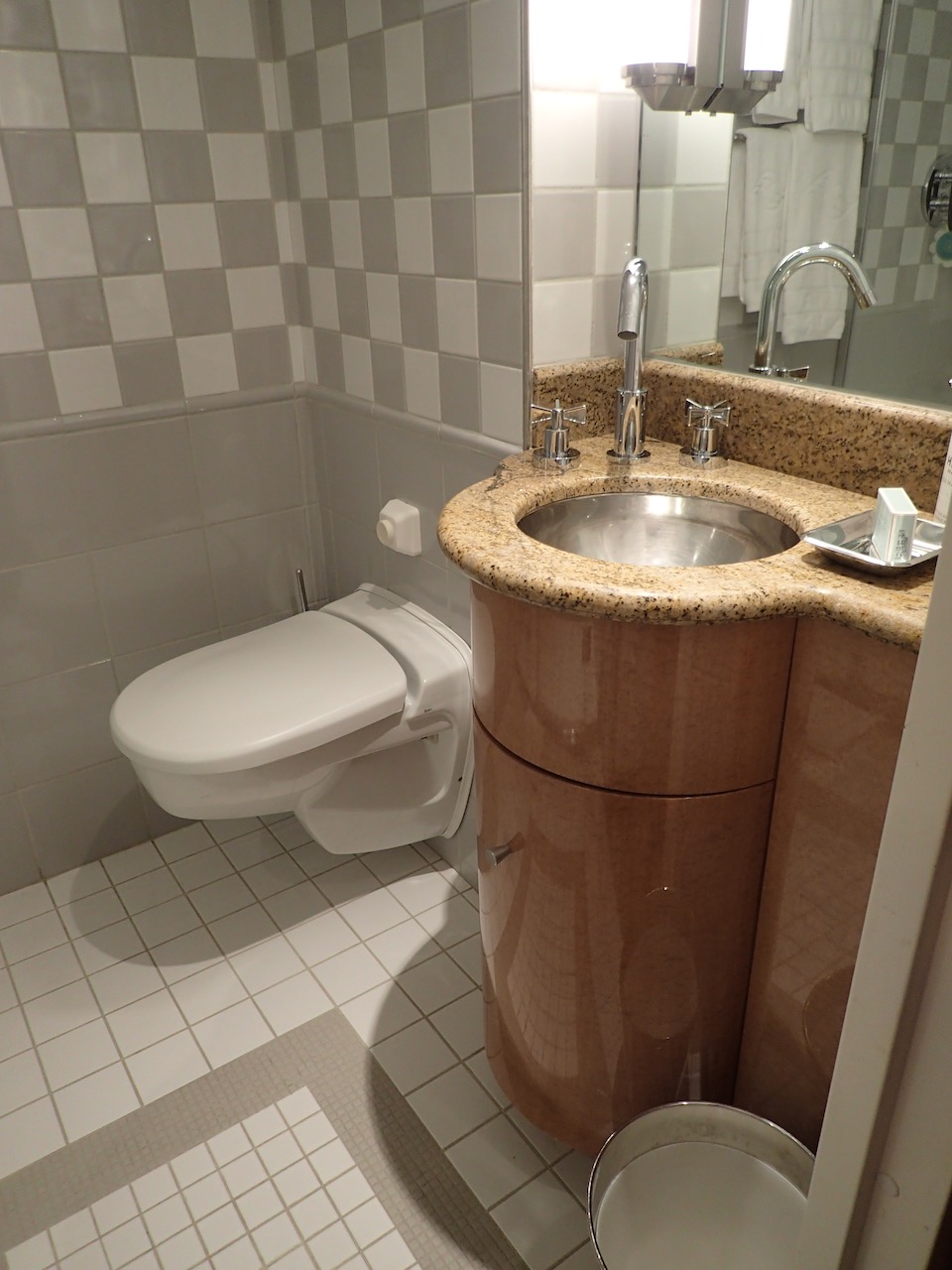 However, I did find the minimal counter top space and, in particular, lack of shelves rather annoying. There is a drawer under sink, but it is awkward to open and use. 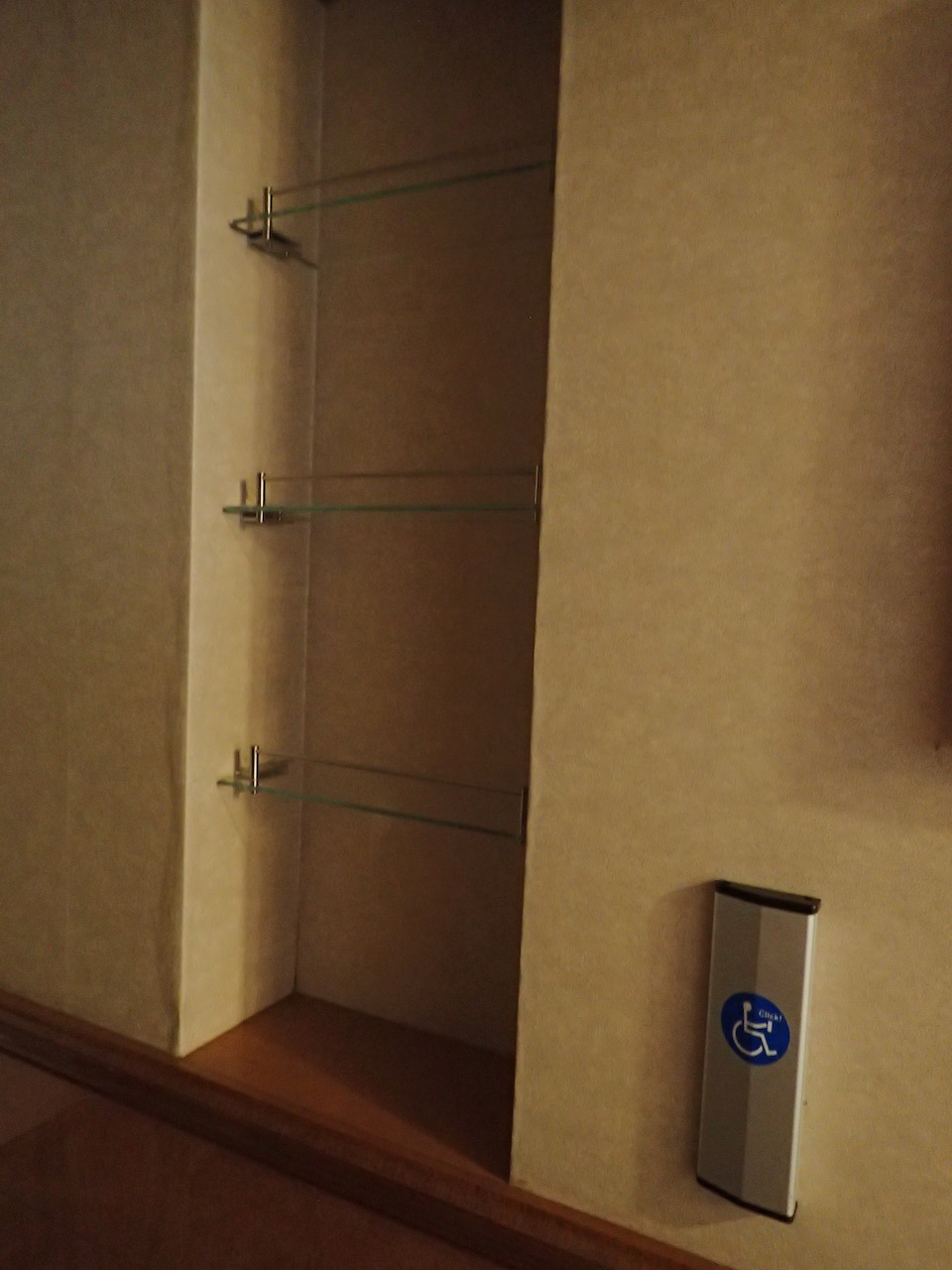 By the button in the hallway, there are some shelves, which I found useful as a place to put my toiletries since there wasn't really any place for them in the bathroom. 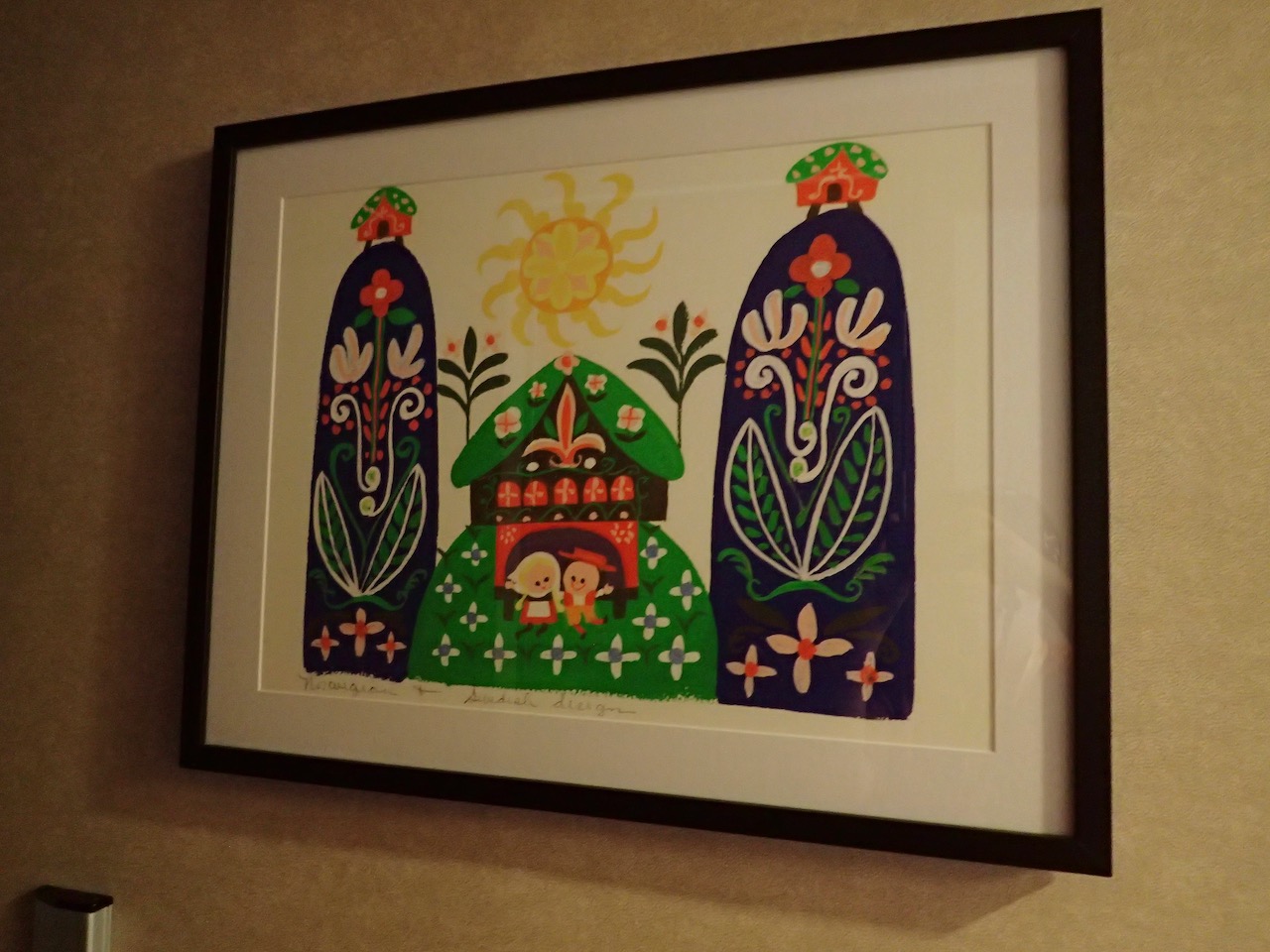 We really enjoyed the Mary Blair 'it's a small world' art in the room. 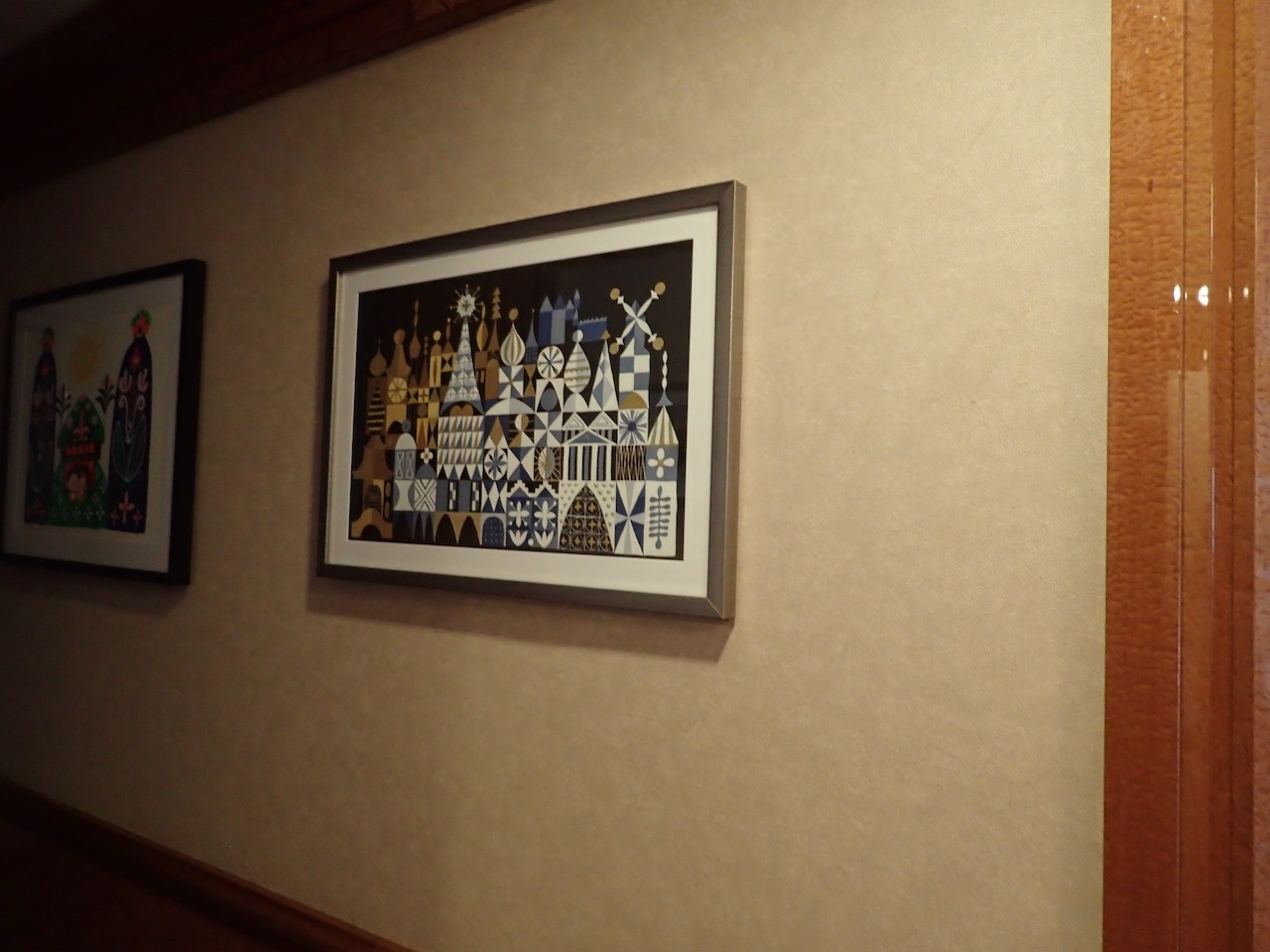 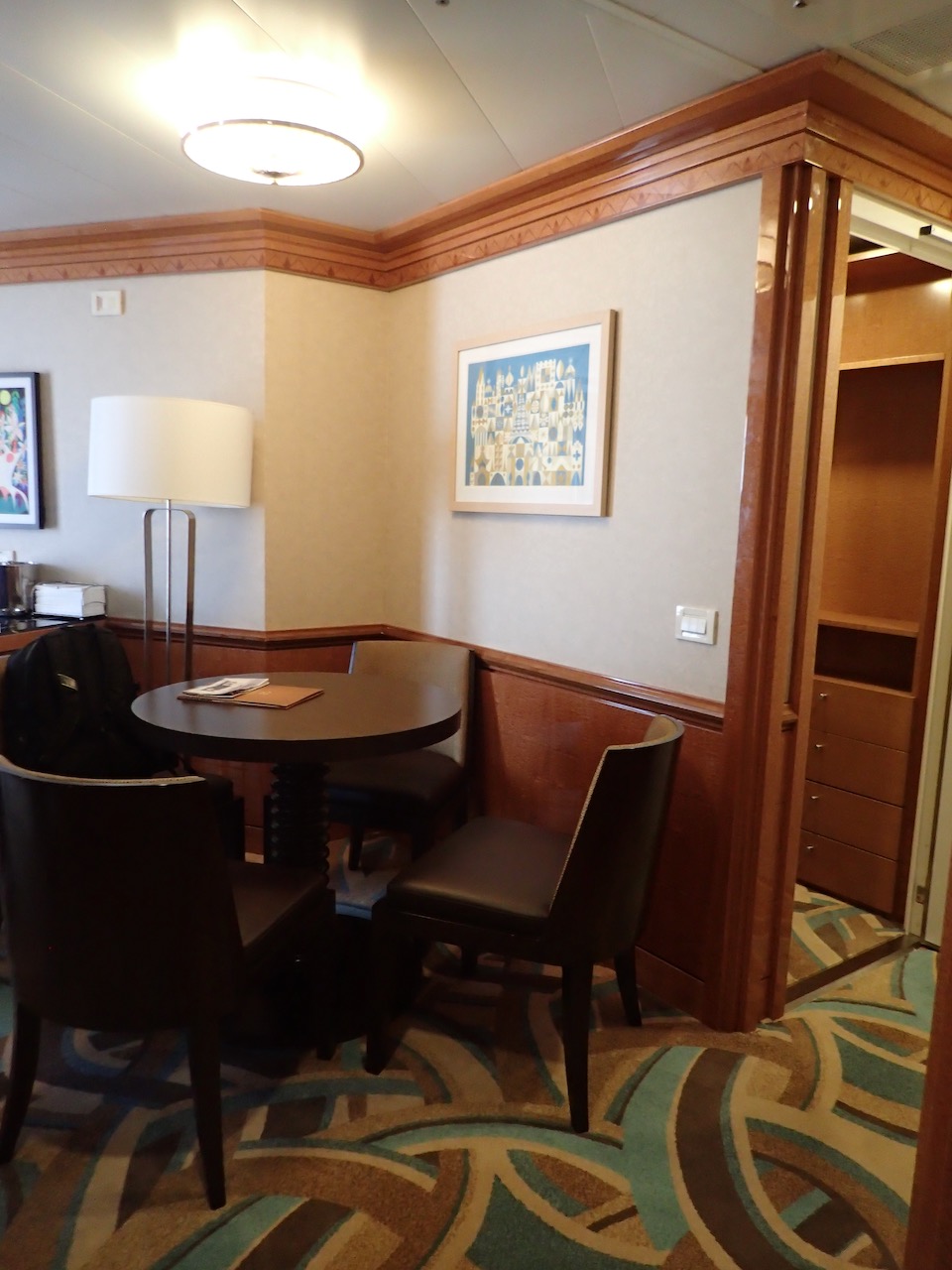 The living room area has a table with four chairs. Off to the right is a walk in closet. We found the area in front of the closet a good place to put Mik's wheelchair when he wasn't using it. 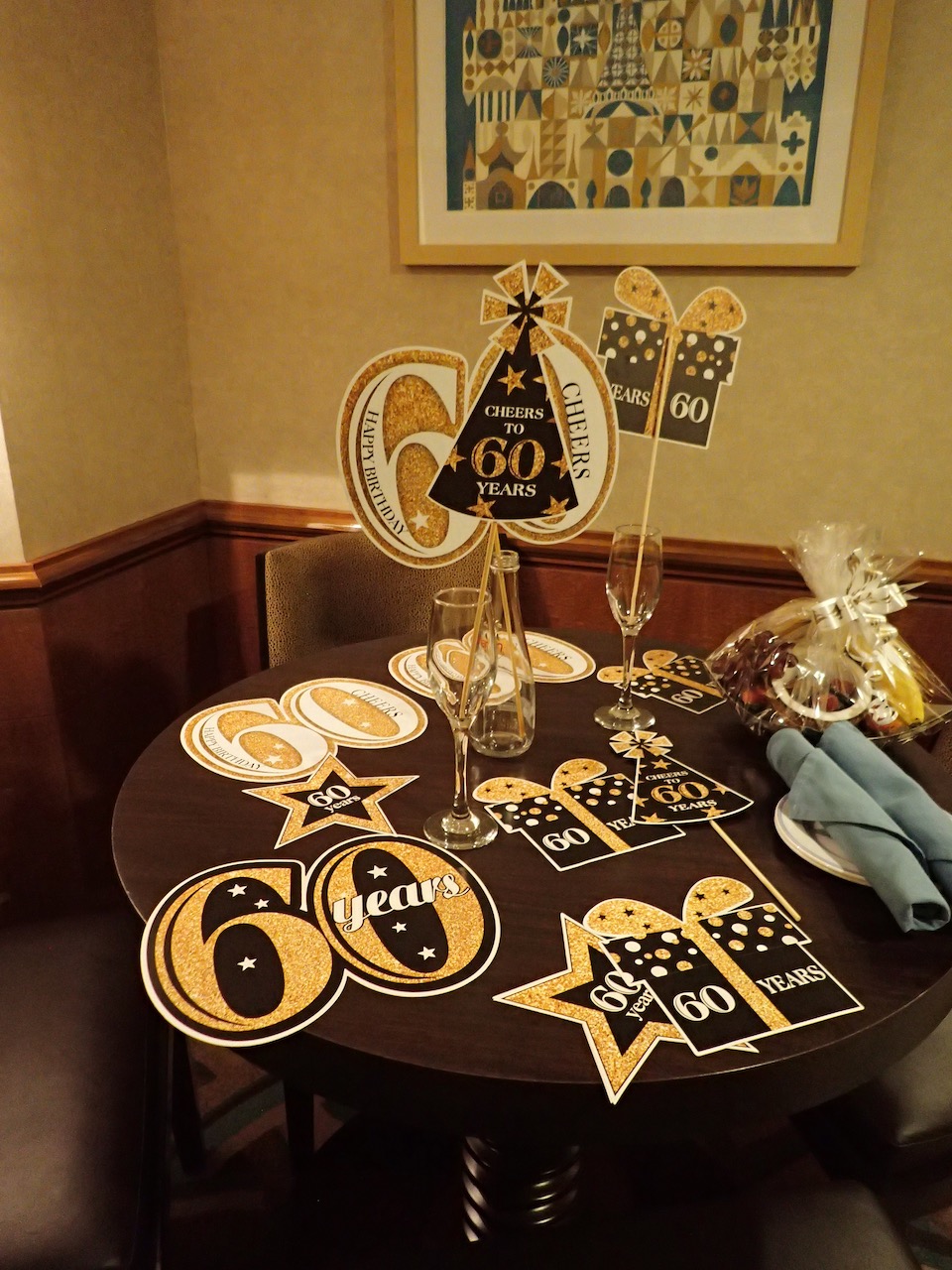 The table was a great place to display the 60th decorations I brought for Dad. 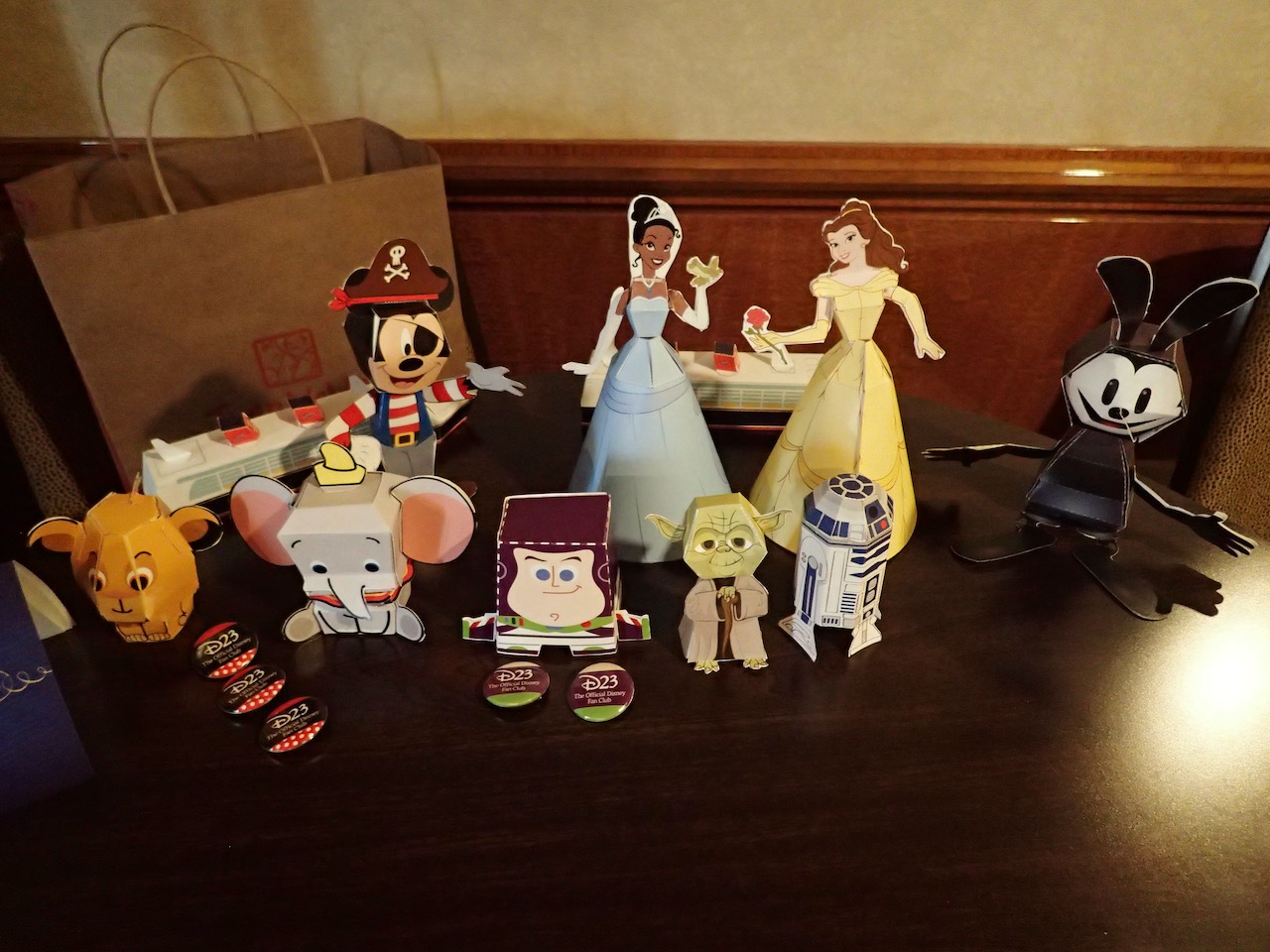 It was also great for the growing 3D craft collection. 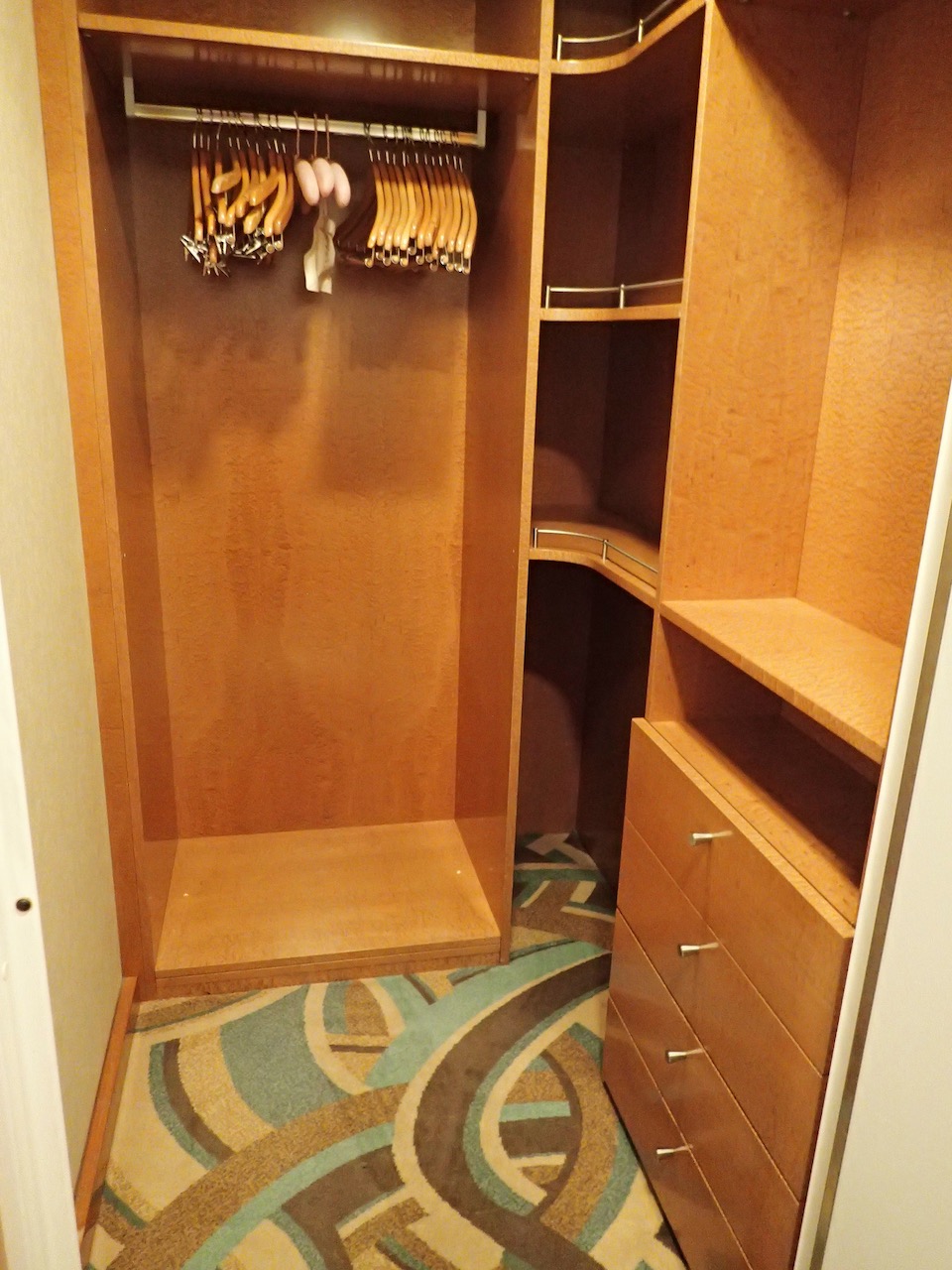 The walk in (not sure it's roll in width) was the main closet we used. In particular, it was a useful place for all our shoes. 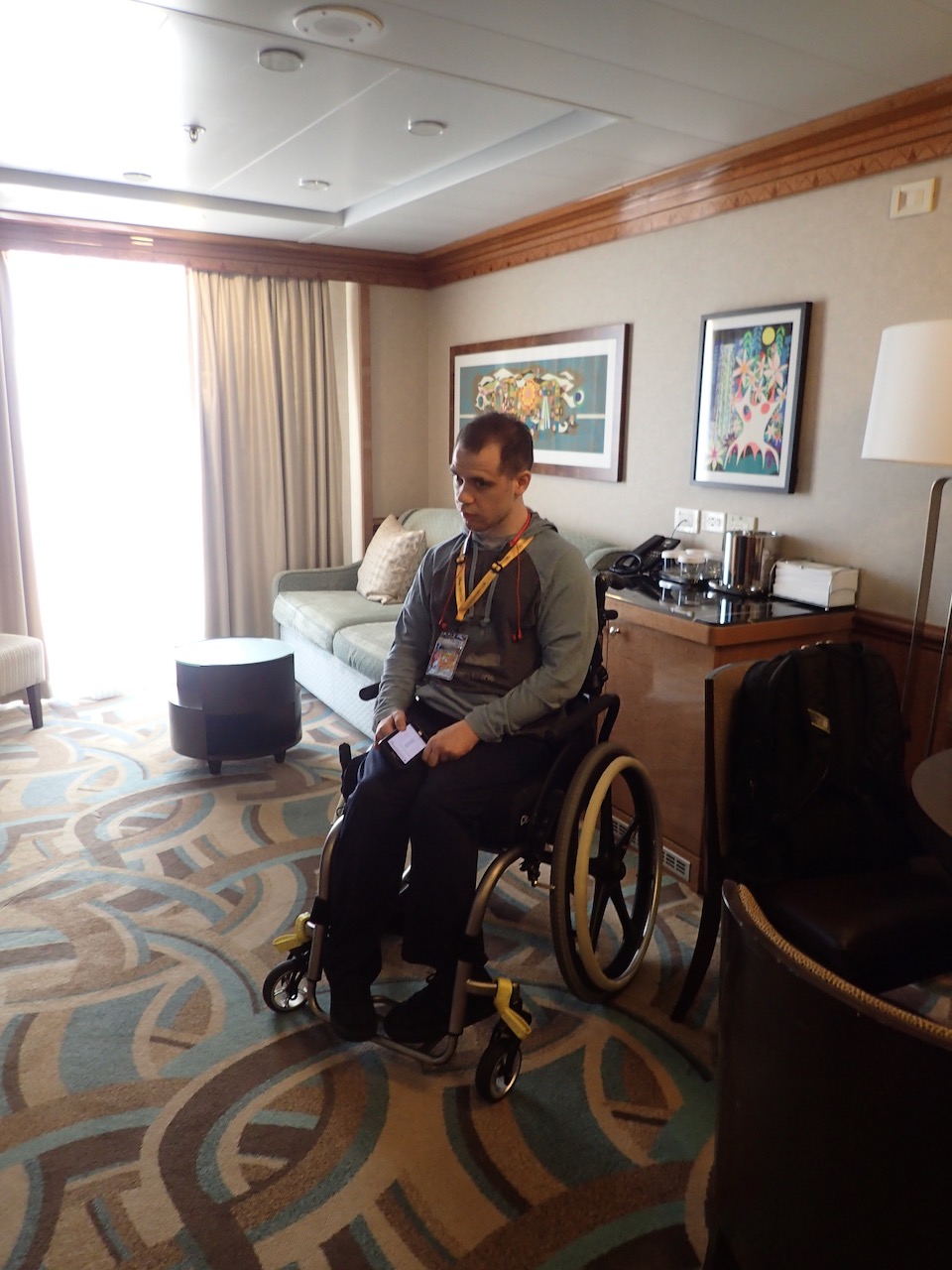 The living room area wasn't bad during the day when the sleeper sofa was in. Behind Mik is the cabinet with the mini fridge. 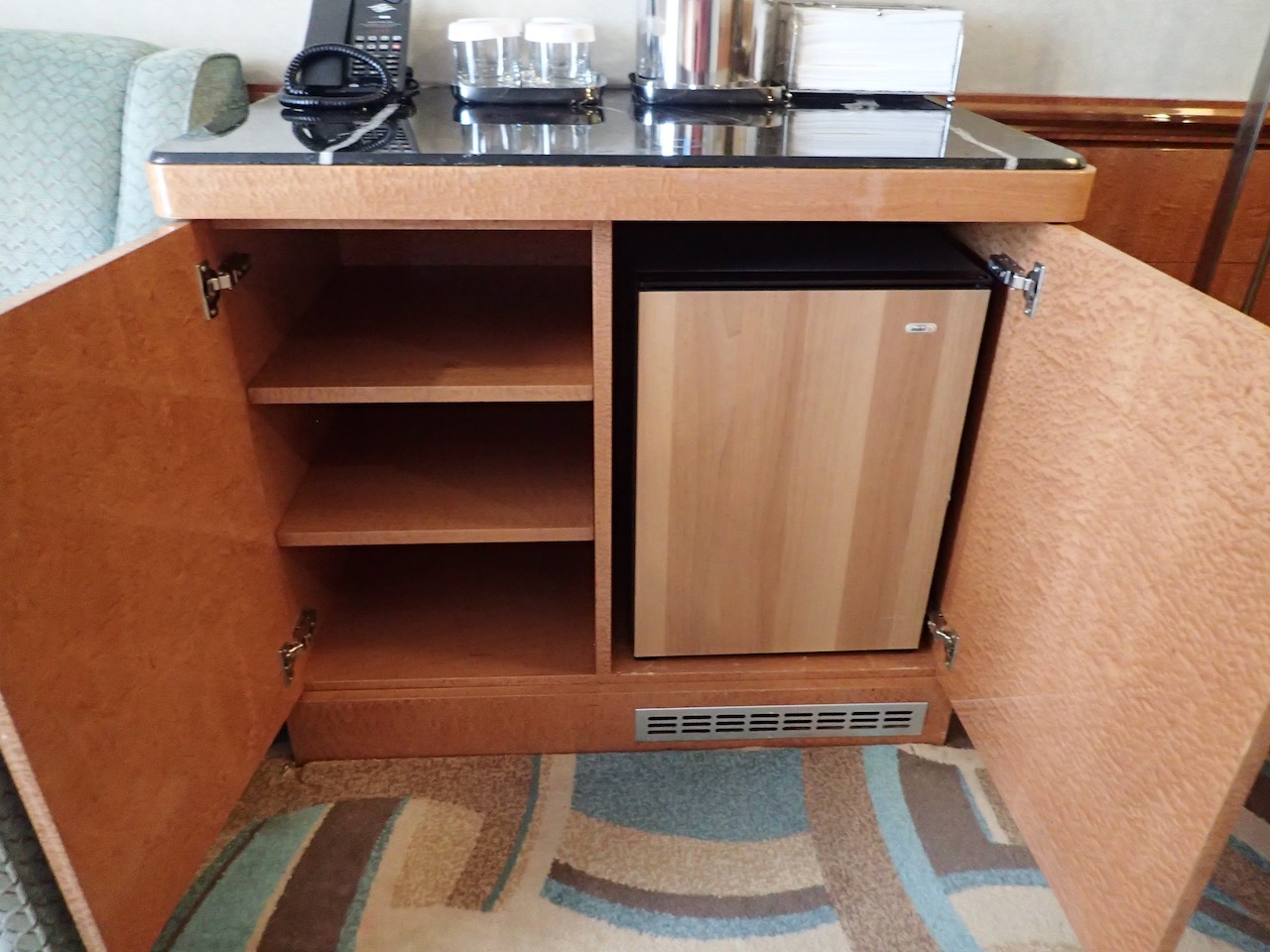 The mini fridge was especially useful this trip as we kept it stocked from the Concierge Lounge with mini cans of soda and sparkling water (having stocked up on sparkling water was especially nice when the ship ran out after Panama, although we still ended up with none the last few days). I thought the shelves were a good place to put Mik's clothes in a place he could get them himself, but it ended up being blocked by the round table every night. 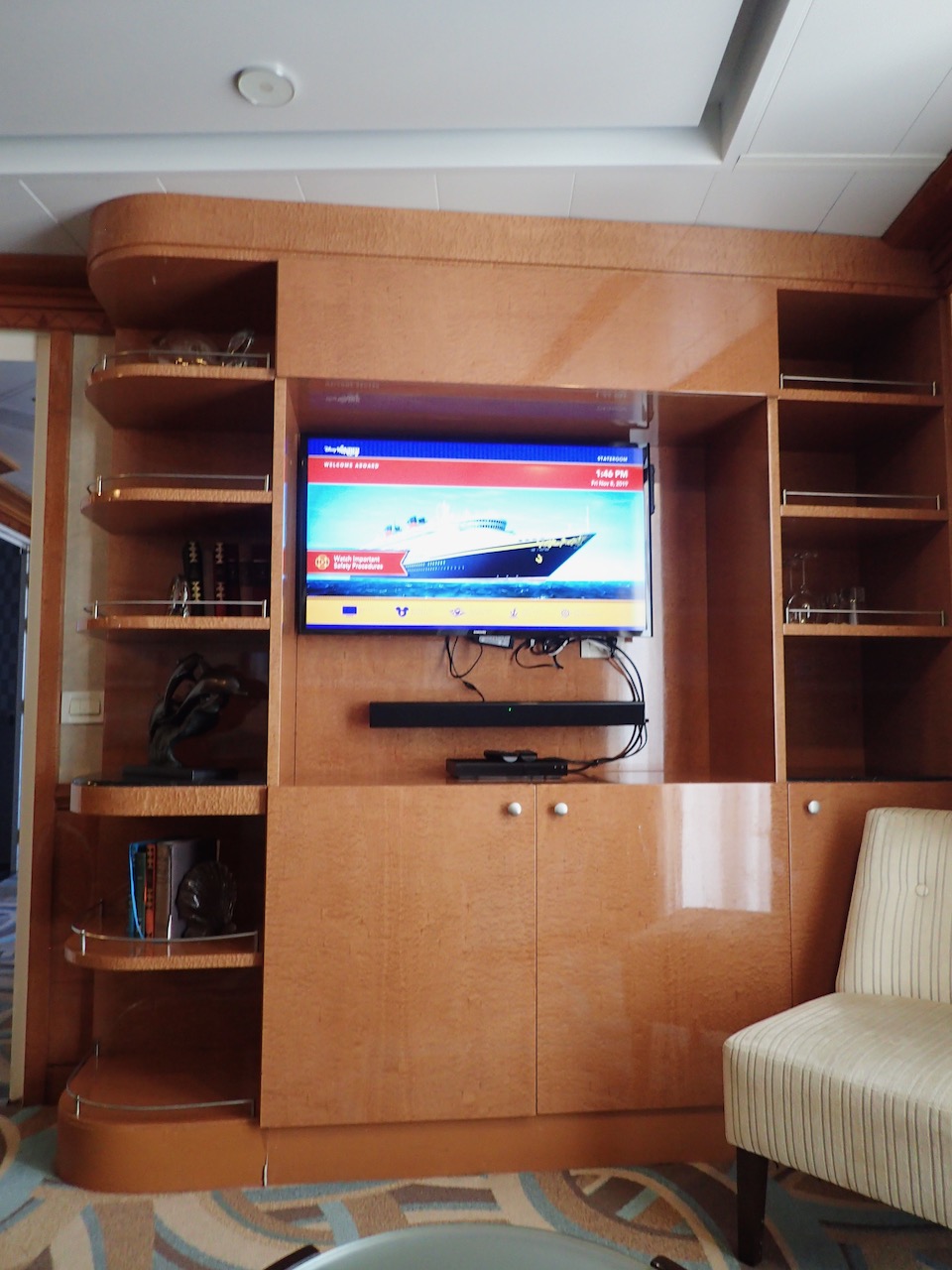 The TV area in the living room has lots of shelves and storage. It ended up being kind of annoying to use, though, as the bed blocked the doors from fully opening and that's where I put my clothes. However, I did find the surface area below TV to be a great large catch all area for me. There is also a DVD player here, but we didn't hear anything about being able to check them out from Concierge (not sure if that was because they now have On Demand or we were supposed to just know to ask). 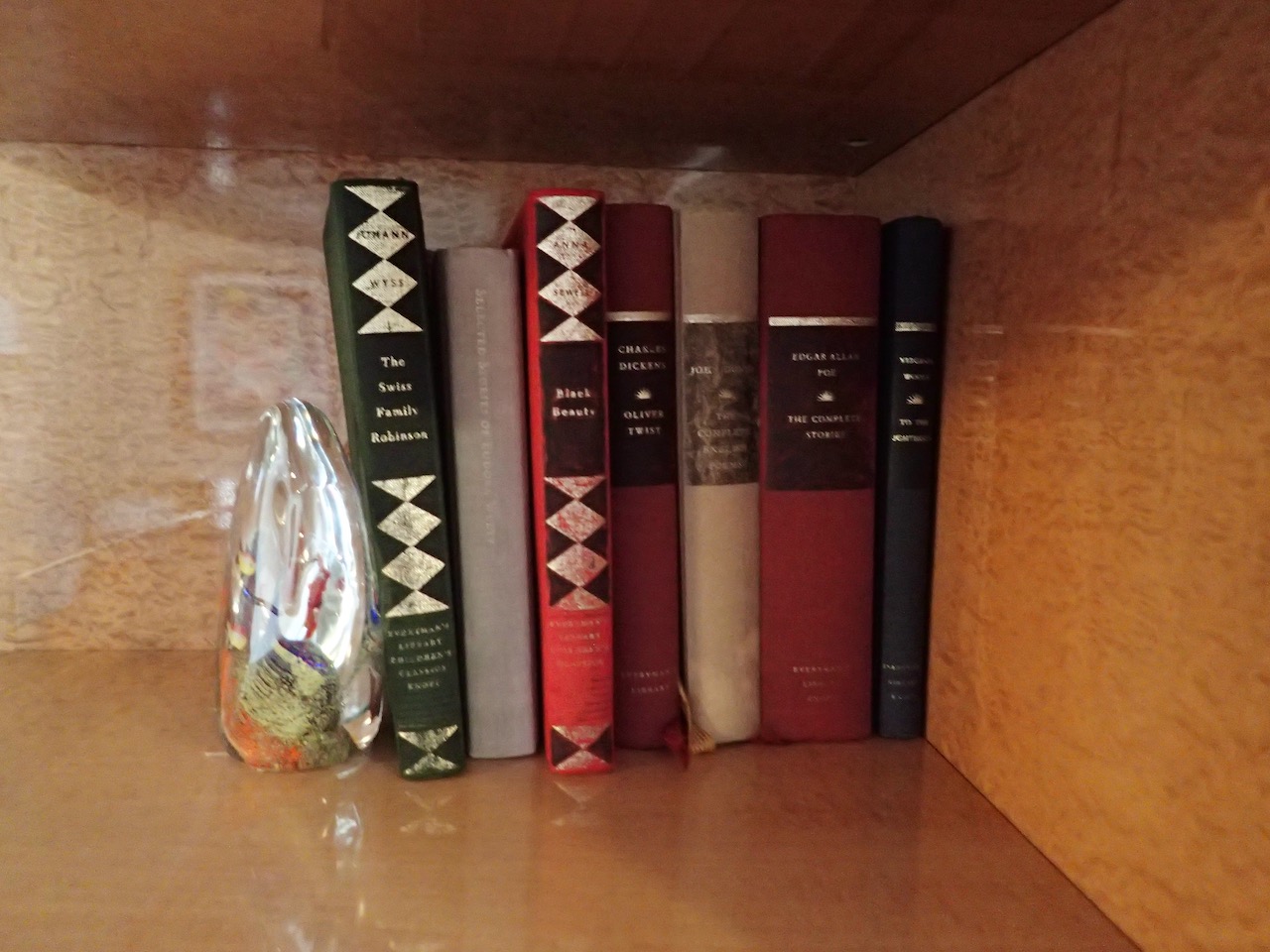 I really liked the touch of there being books on the shelves, although I barely got any reading done this cruise (see verandah info below for probably why). 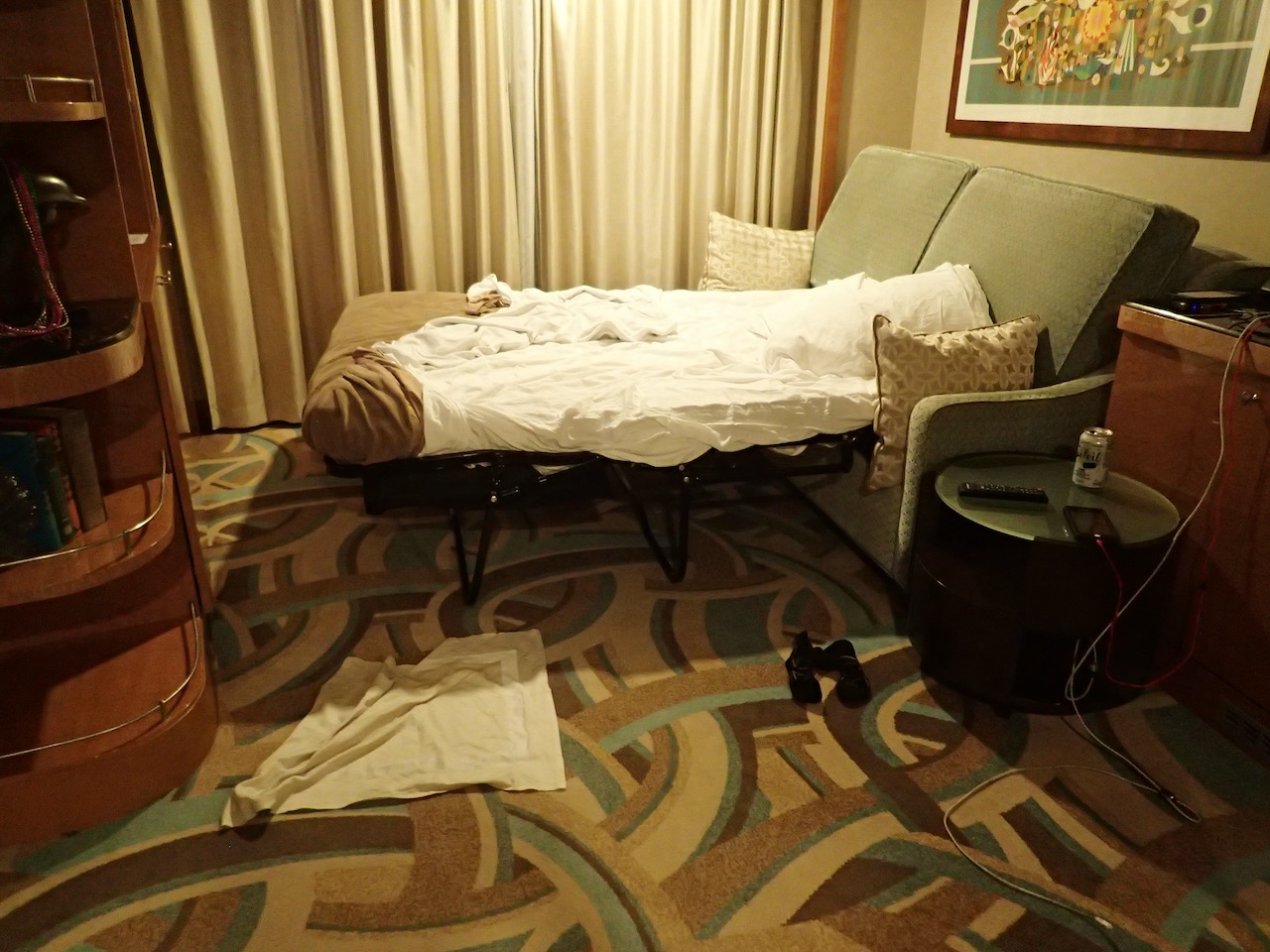 The couch in the living room was very disappointing. We didn't like that it took up so much space when it came out making the room so much less functional than the regular stateroom designs. It was also very uncomfortable. We really wish it had the bunk bed style like we're used to or even just the couch that turns over into a twin size bed. What is really odd is the first night they asked if we wanted another bed brought in as if the room wasn't already too crowded when converted for the evening??? 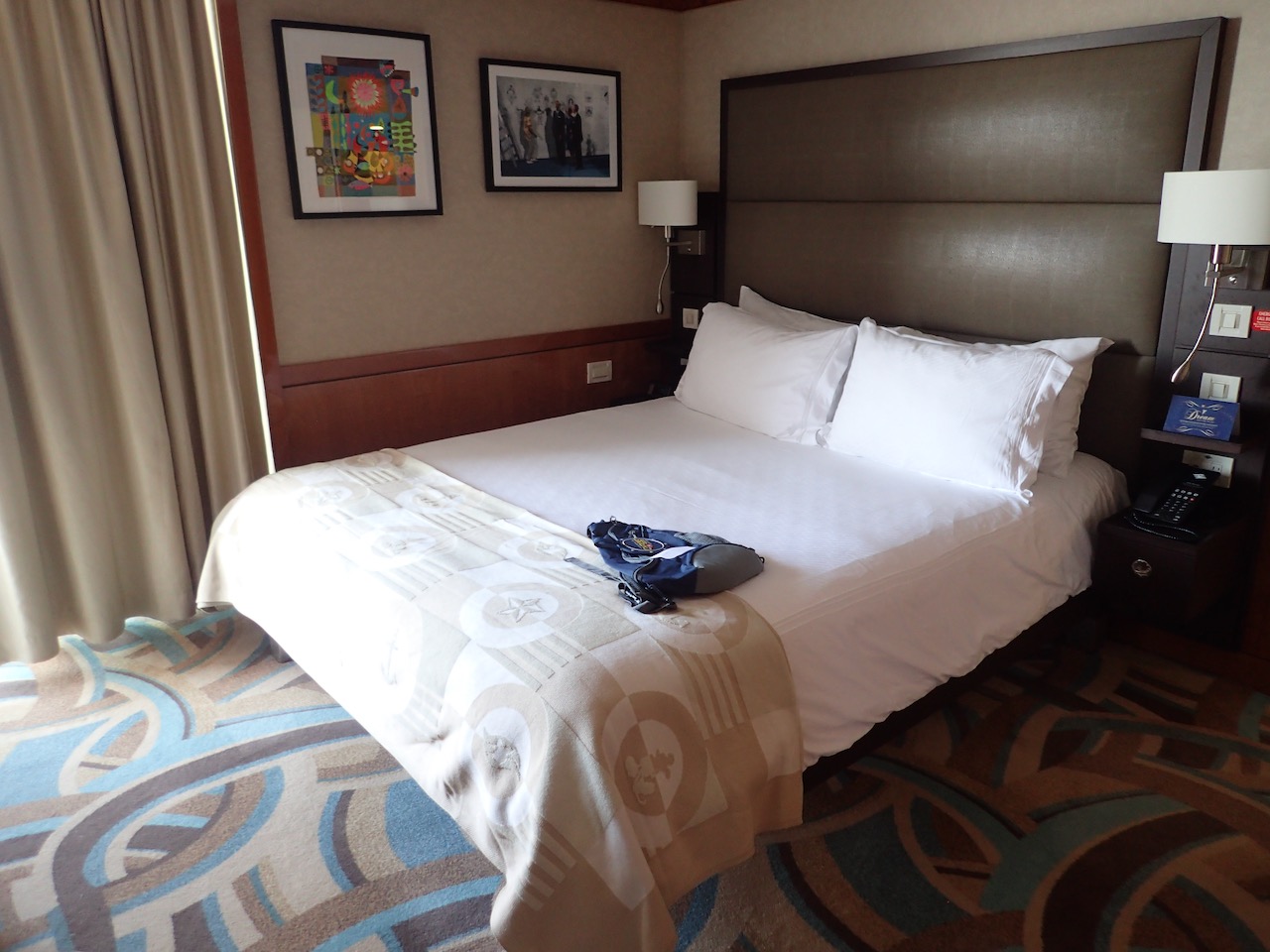 Bed in the Master Bedroom. 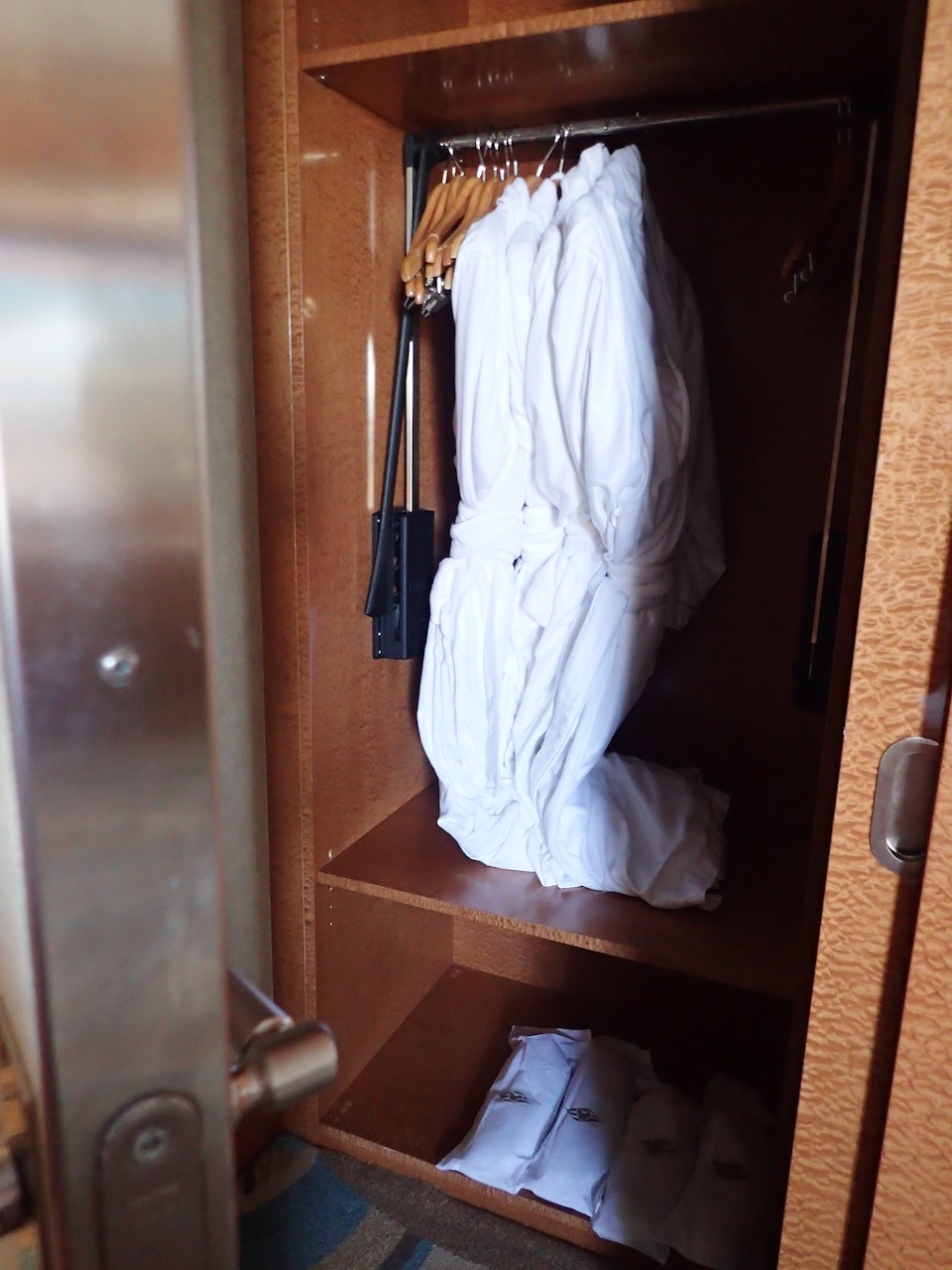 The closet inn the master bedroom is a little awkward in that you have to close the door to the room to use it. This closet has the handle that pulls the bar out and down to be more accessible. 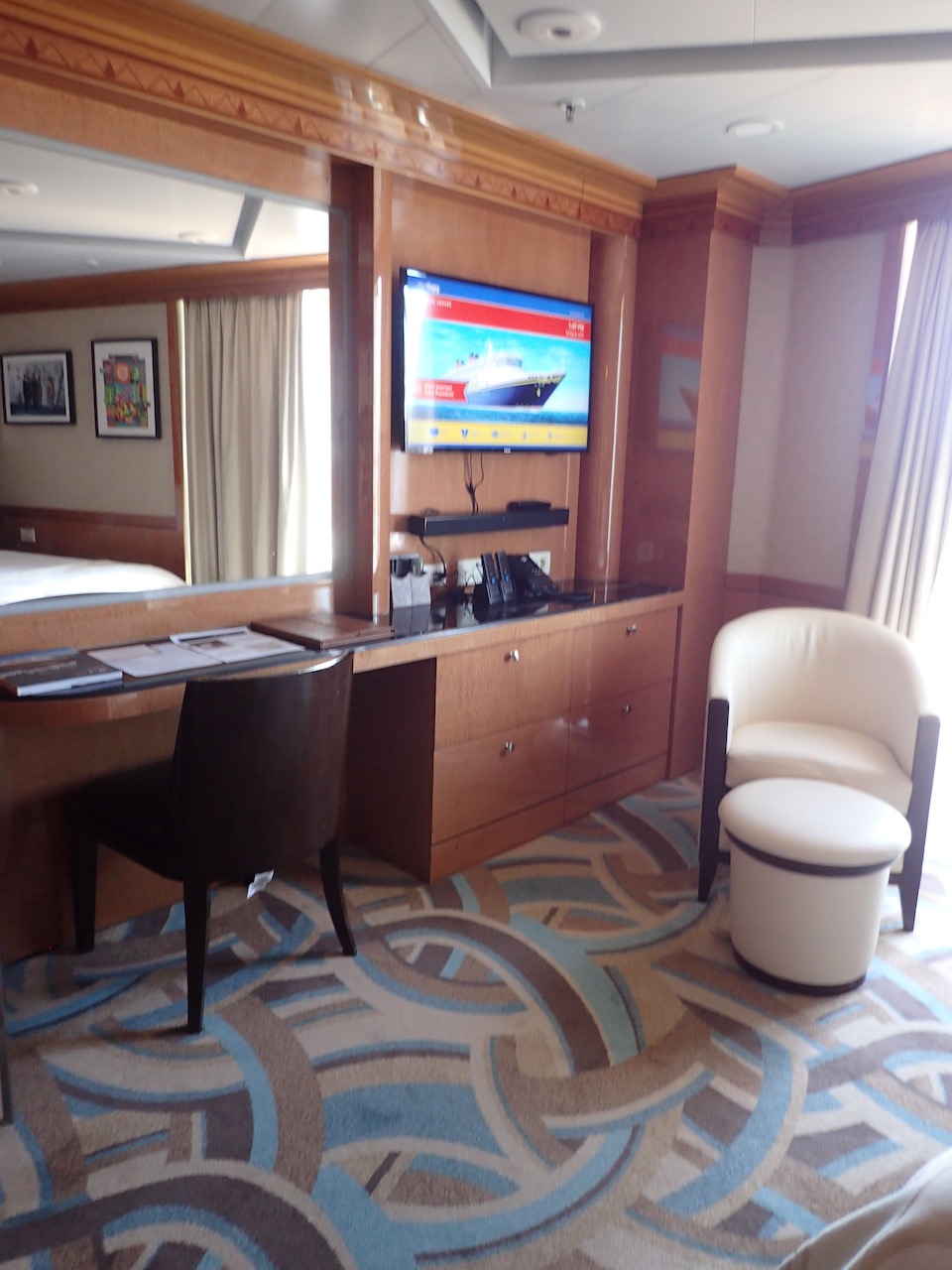 The Master Bedroom was spacious with plenty of room for Mik to hang out on the floor. Everyone particularly enjoyed that it had its own television, especially with it being a long cruise. 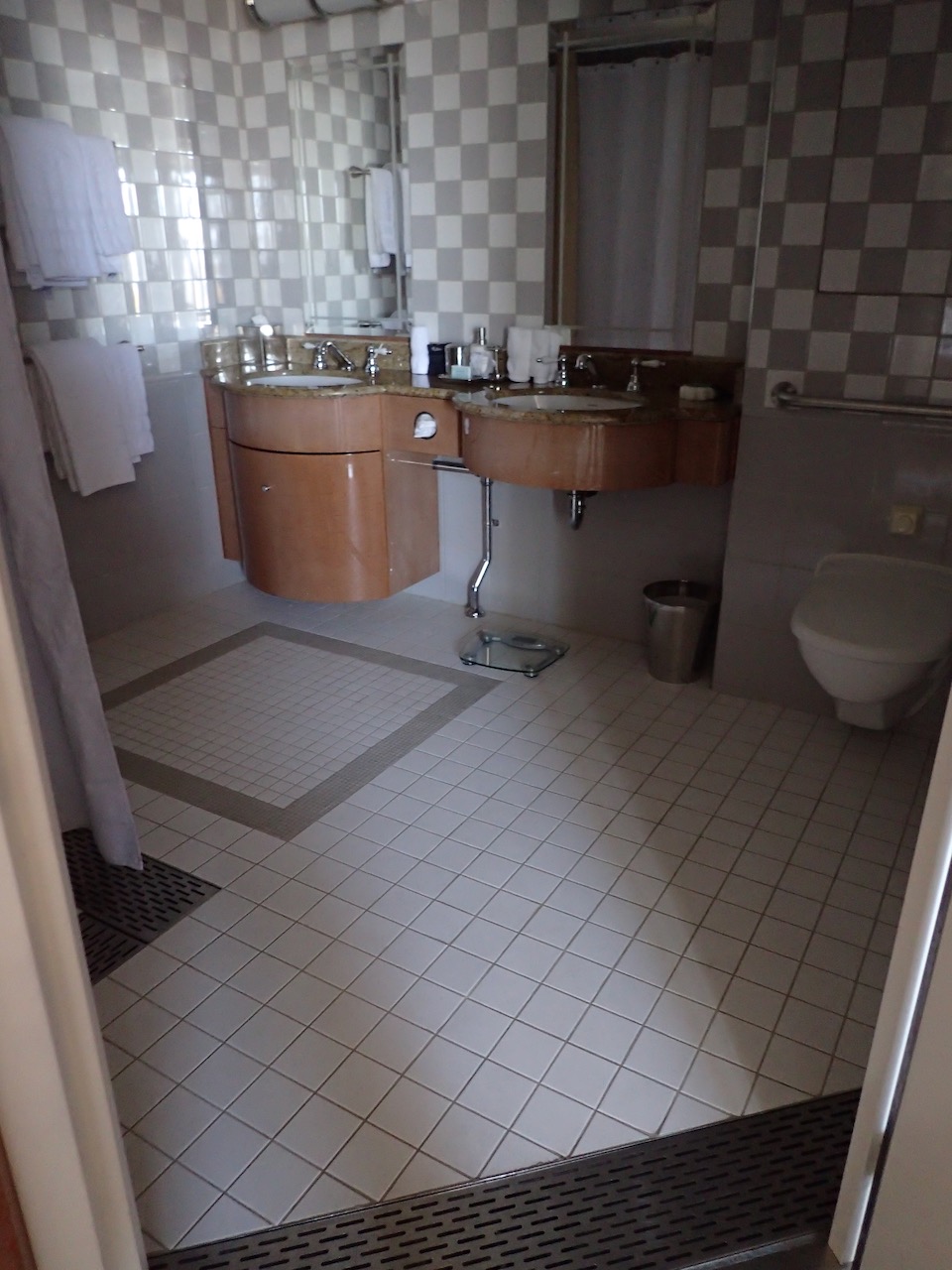 The Master Bathroom was the accessible one. It was bigger than the ones in the regular staterooms, but really nothing more than an extra sink. This did allow for more counter space and room for toiletries. In particular, it was nice that it had a toothbrush holder. Mik still hated the drain by the door, which we nicknamed the knee grater as he never fails to end up cutting his knees at least once a cruise on them. 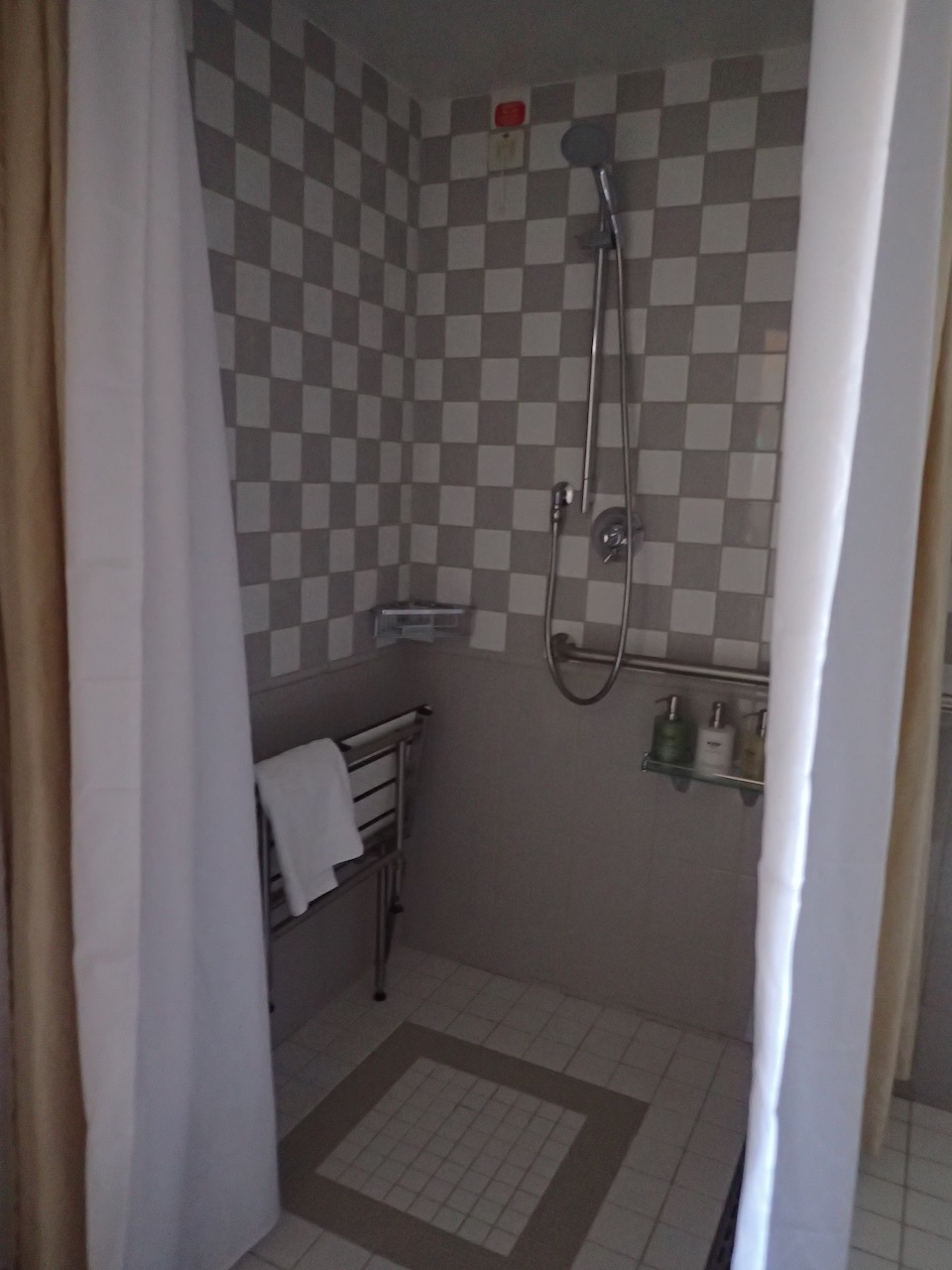 Roll-in shower was pretty much the same as we're used to on the ships. This was our first cruise with the large refillable toiletries. While this means I will eventually run out of toiletries at home, these bottles are so much easier to use. In particular, it was nice to not worry about running out of lotion or body wash. 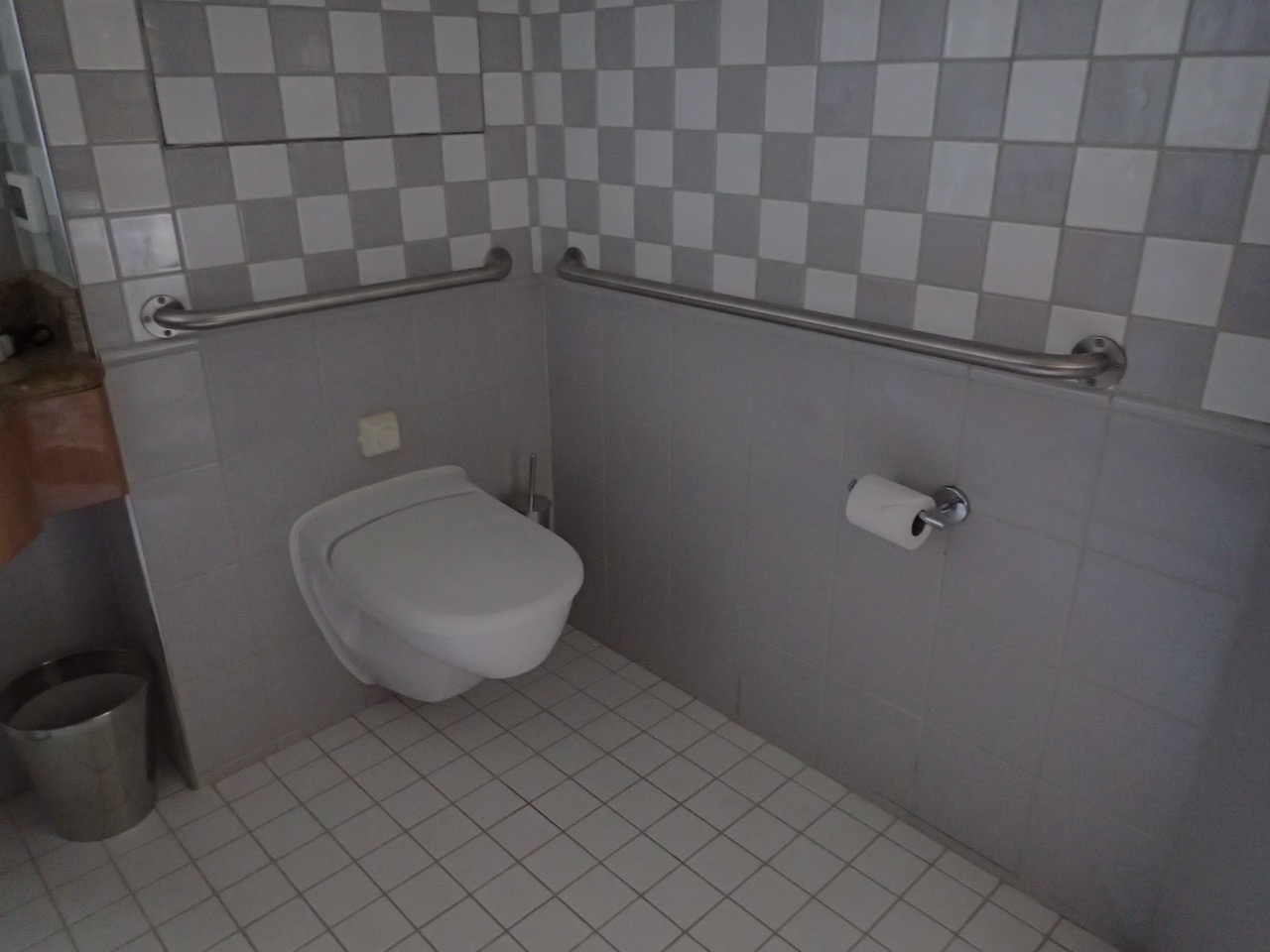 Mik found the grab bars to work out that he needed very minimal help. There is a door to verandah from living room, but it has a step. Thus, the only accessible access is through the bedroom. The verandah was big as expected, but disappointing in that there were no lounge chairs. As I am used to spending most of the cruise out on the verandah reading, we asked for some and they had two delivered. They ended up being only chairs that lean back, though, and I found I ended up doing very little reading and really missed one of my favorite parts of cruising (usually read several books on even thee three to four day cruises and only got through one this 14-day cruise). 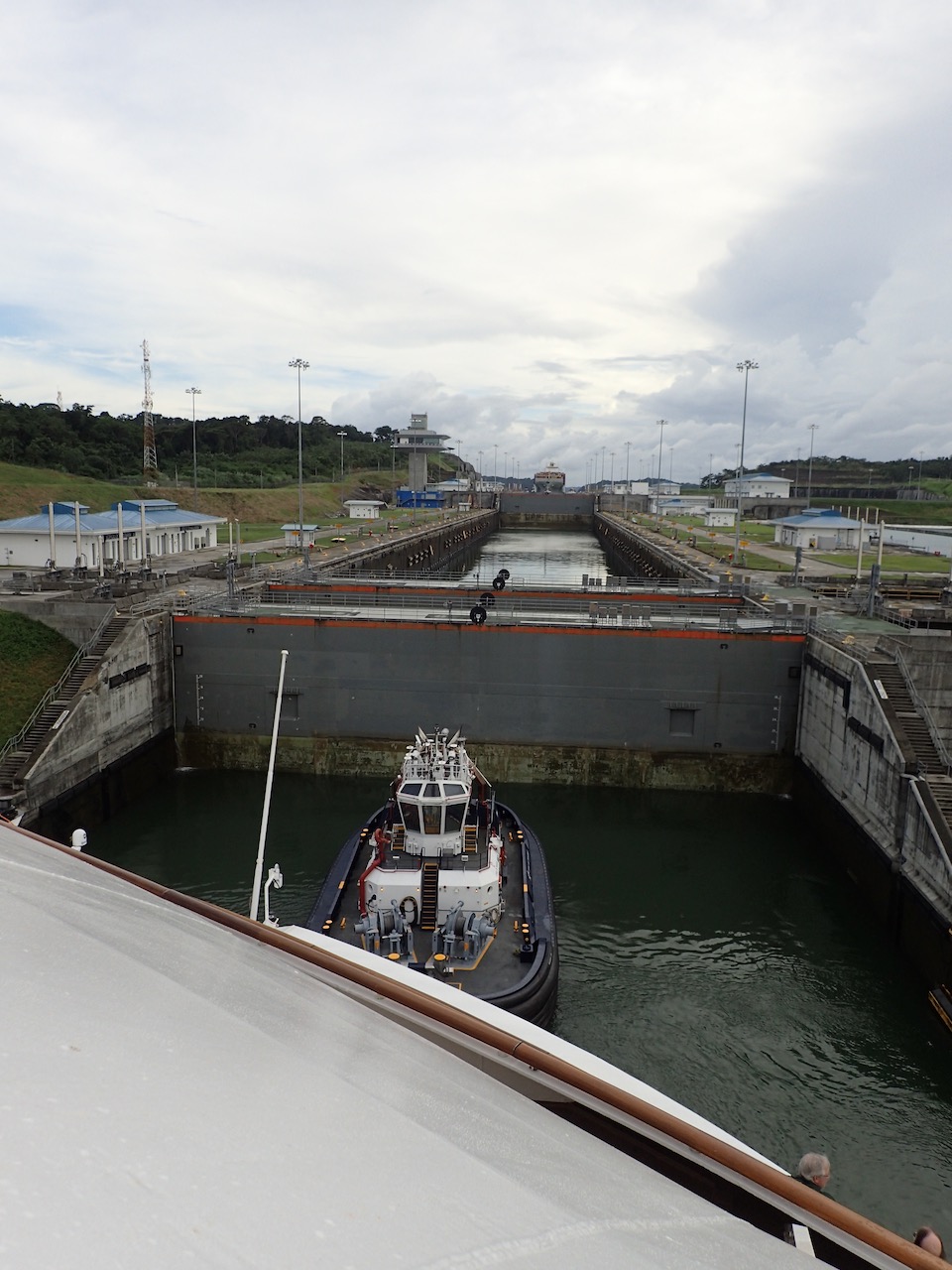 While not a great place to read as usual, the verandah was still a great place to watch us pulling into ports, especially Cartagena. Of course, it was also great for watching leaving the locks in the Panama Canal. 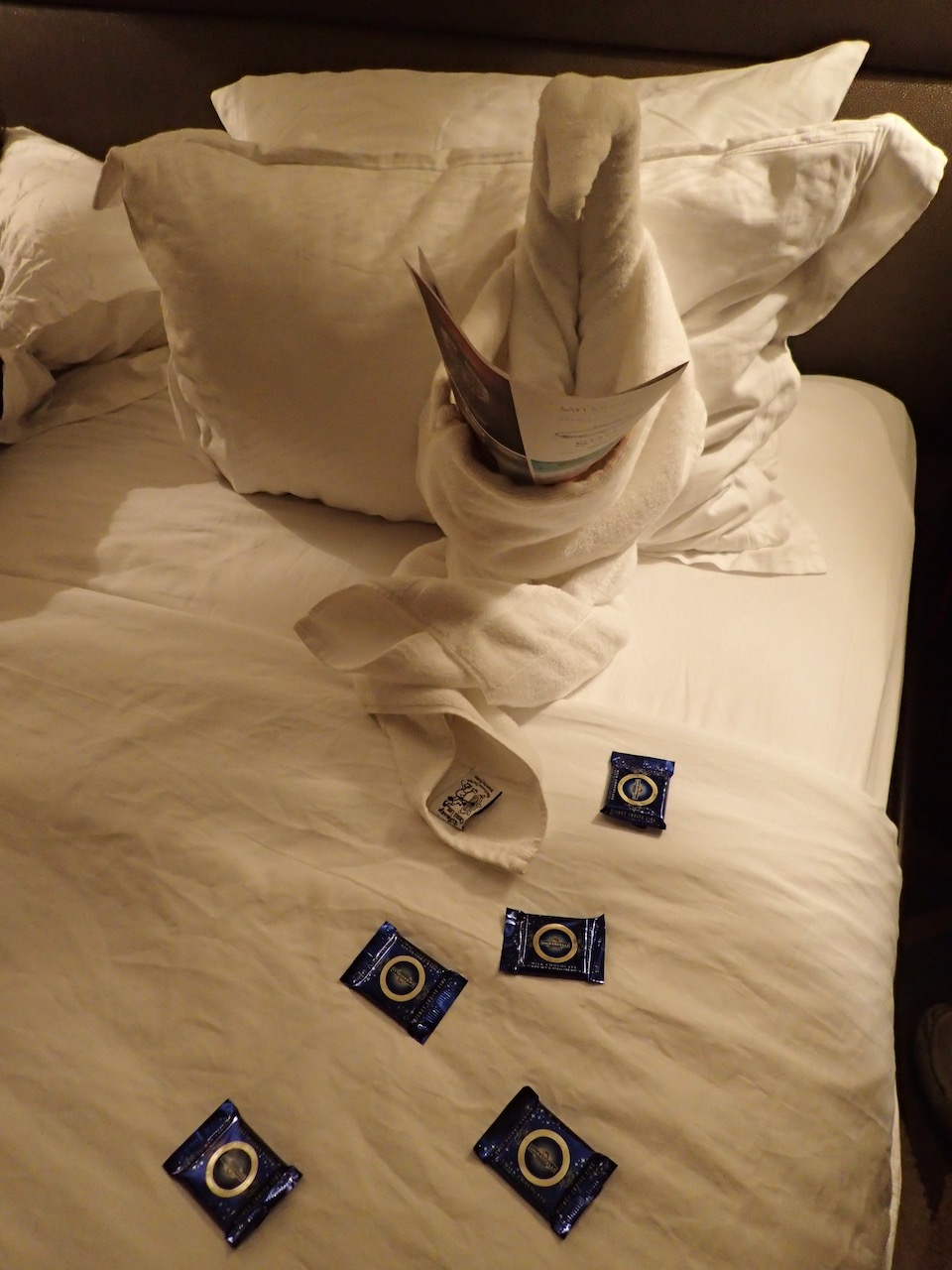 Overall the one bedroom stateroom was nice to have, especially since this was a long cruise with seven sea days. However, the overall it didn't feel as well designed as a regular stateroom and thus didn't feel as large/spacious even though it definitely is larger than a regular stateroom. We certainly did enjoy the Concierge Lounge and many of the associated benefits, but even if we could afford to do another cruise at this level I don't think we'd do a one bedroom ever again. 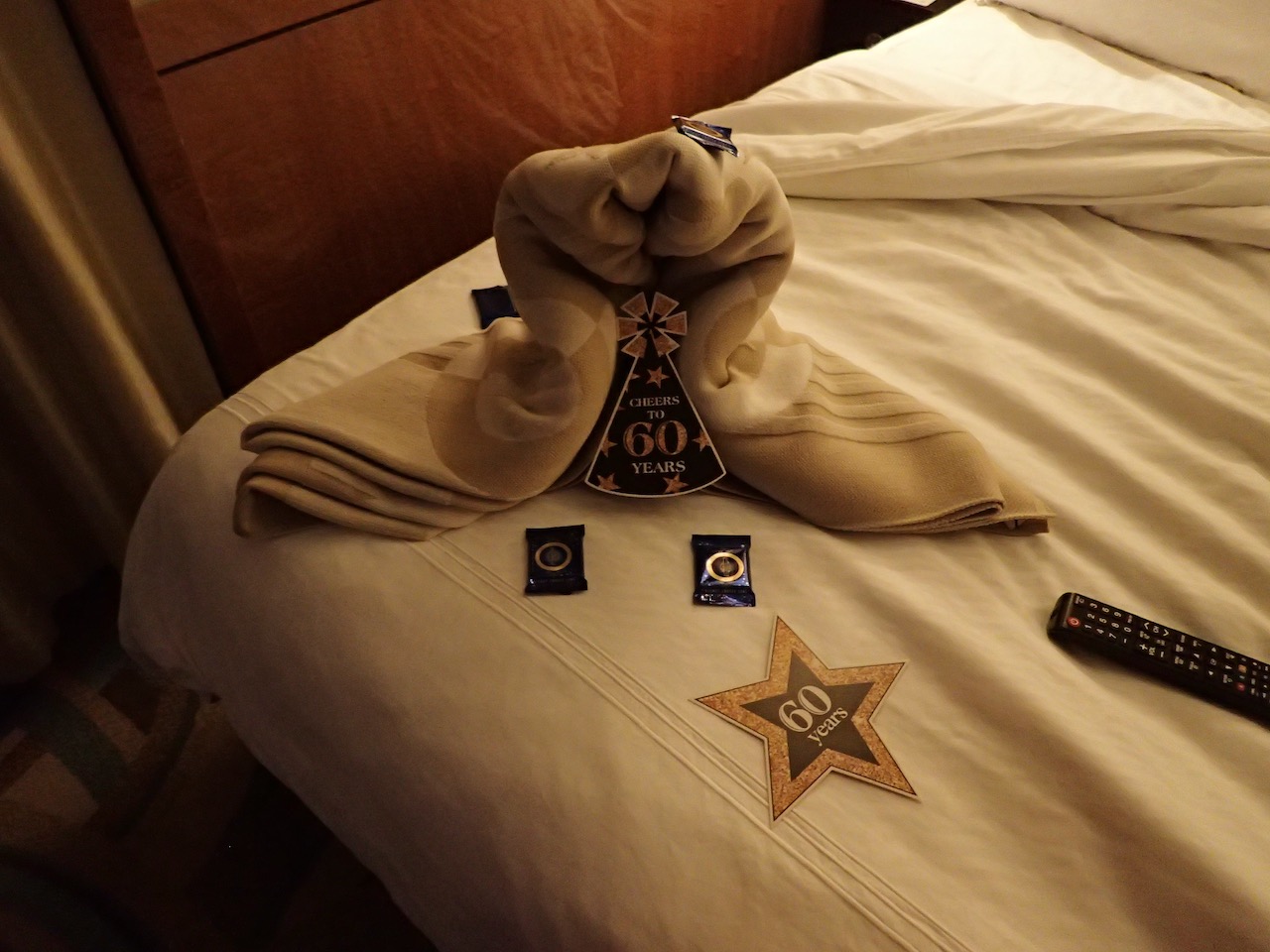