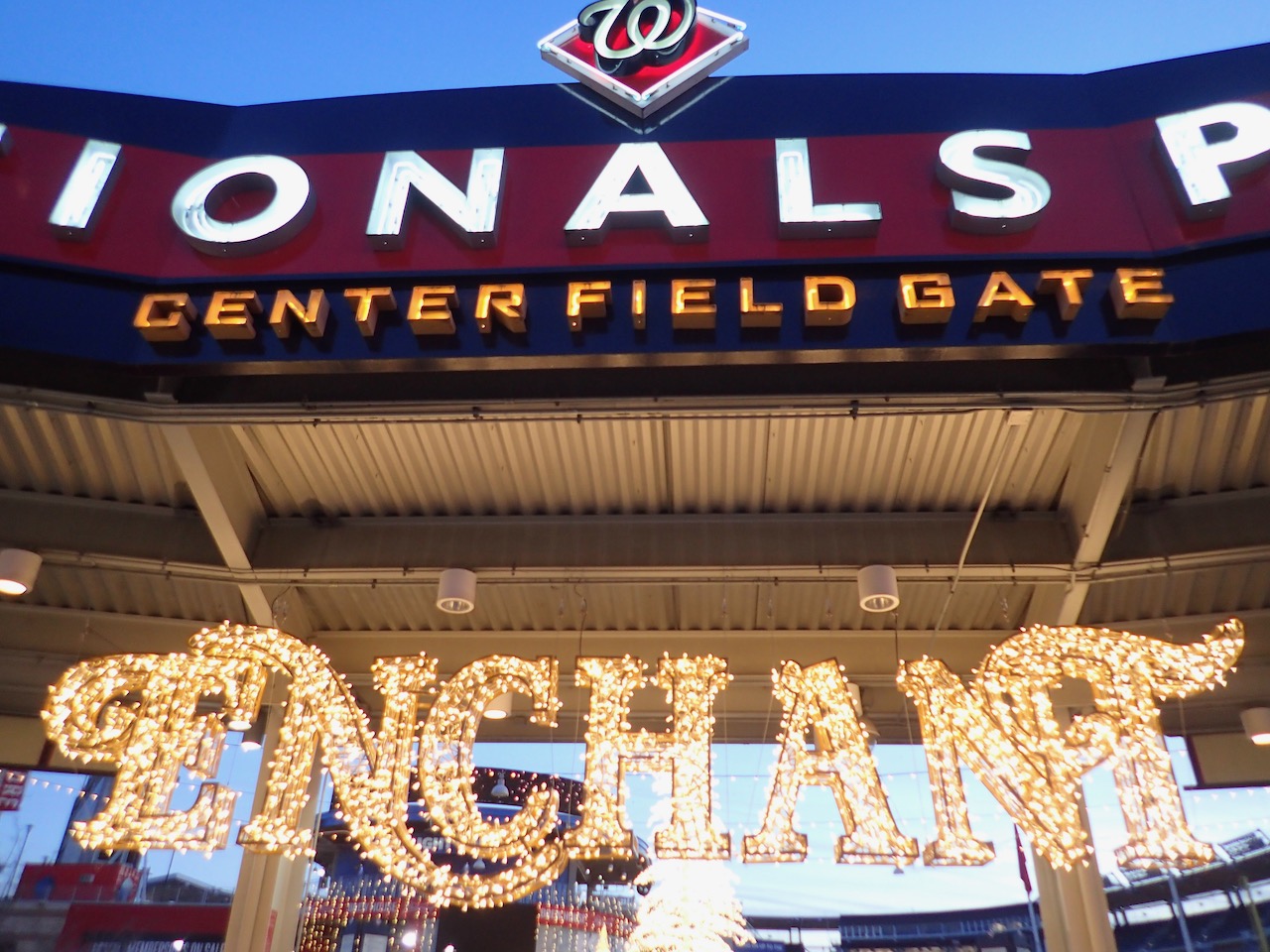 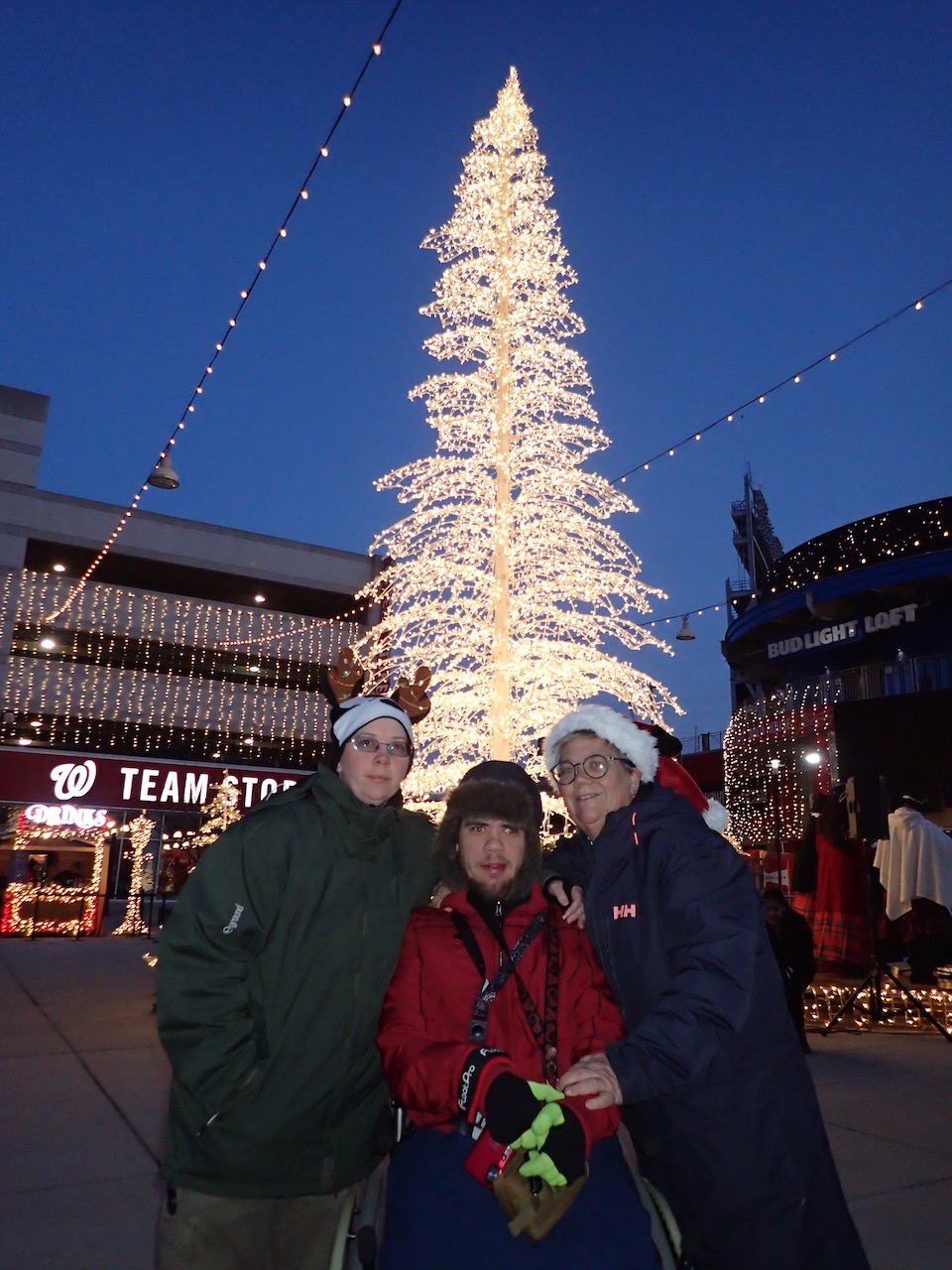 You'd think we'd know to go all the way to the left to enter Nationals Park considering we go to at least one game a year, but they didn't have the normal signage and they didn't send Mik that way until after checking Mik's bag and Dad's stuff and finding that Mik couldn't fit through the metal detector (most standard wheelchairs probably fit, but Mik's is just a bit too wide). In order to not have to check the stuff again, Mom and I stayed inside security and met them over there where there is room to go behind the security table to enter. 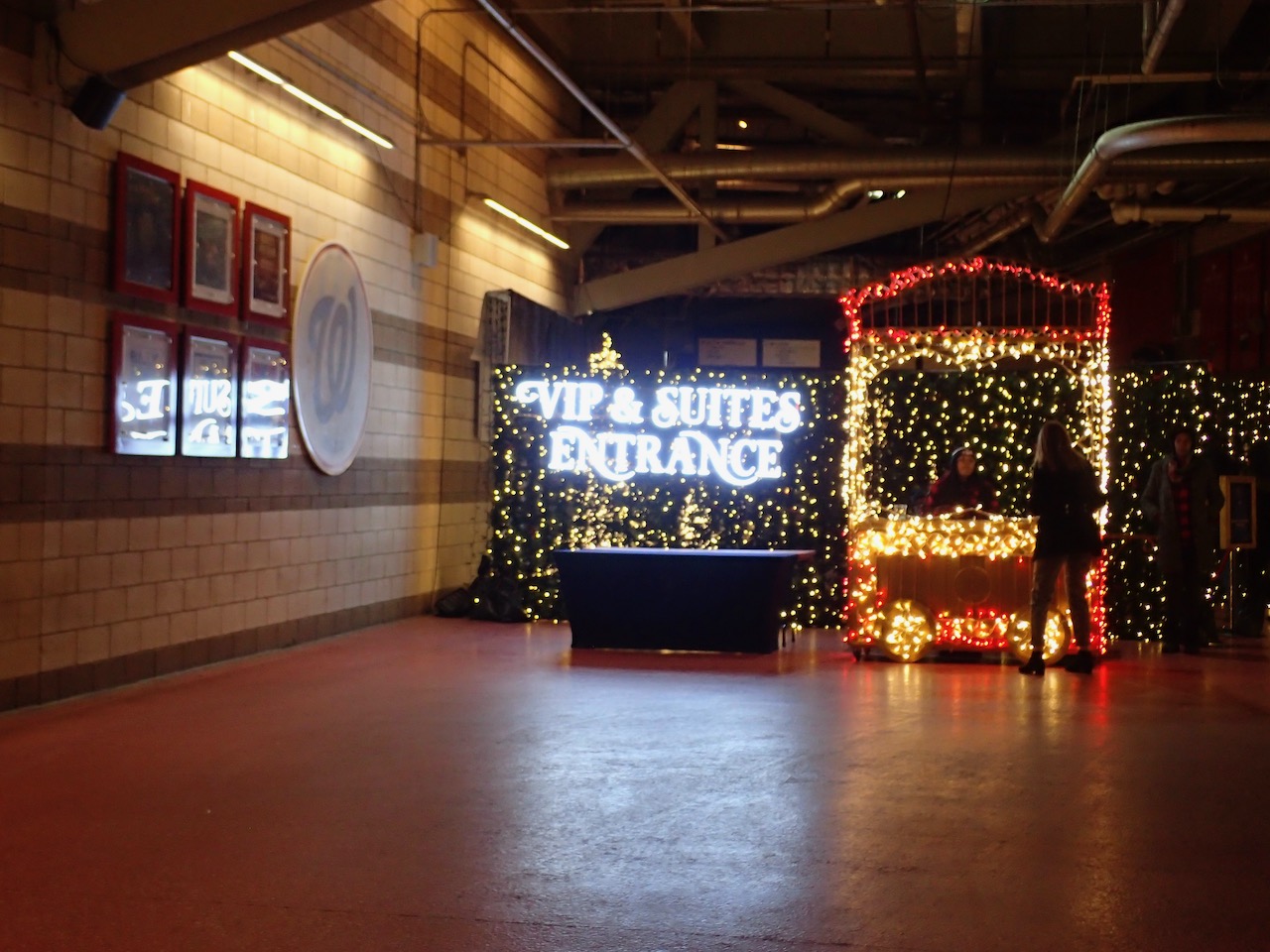 When we entered they did tell us where to go for the elevator for access to the maze, but they didn't say anything about VIP access. Good thing Dad had remembered the VIP part included food and I vaguely recalled that it was in the club. I don't know if the lack of direction was because we ended up coming in from the regular entry after Mik didn't fit through the metal detector for the VIP entry or what, but it is kind of odd there was limited signage to point you where to go and the only obvious thing was the maze. I guess if you don't do VIP then it is obvious to do the maze and then the way it exits brings you through the market and by Santa and Mrs. Claus. 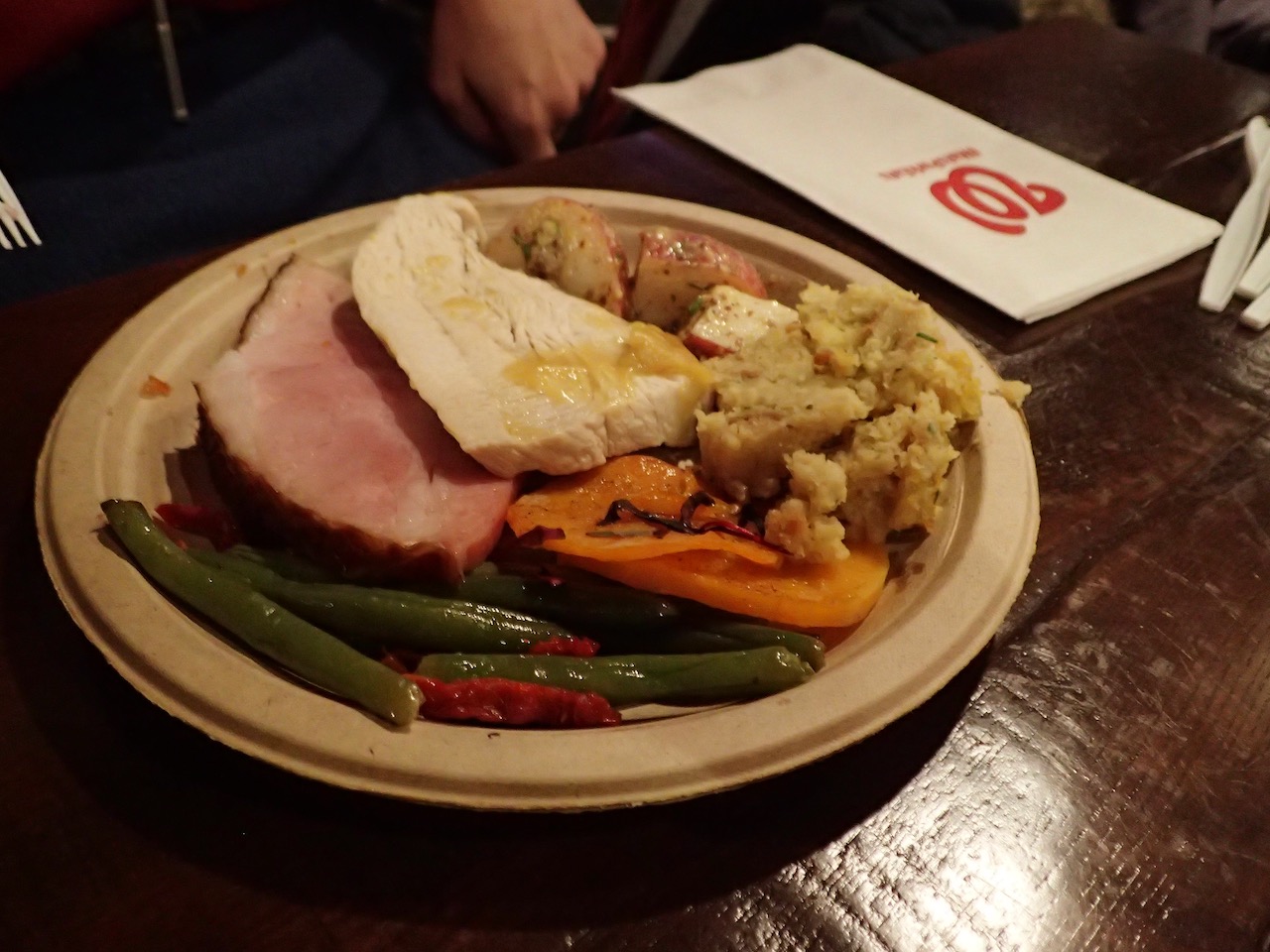 Mik's favorite part of the evening was definitely the buffet. 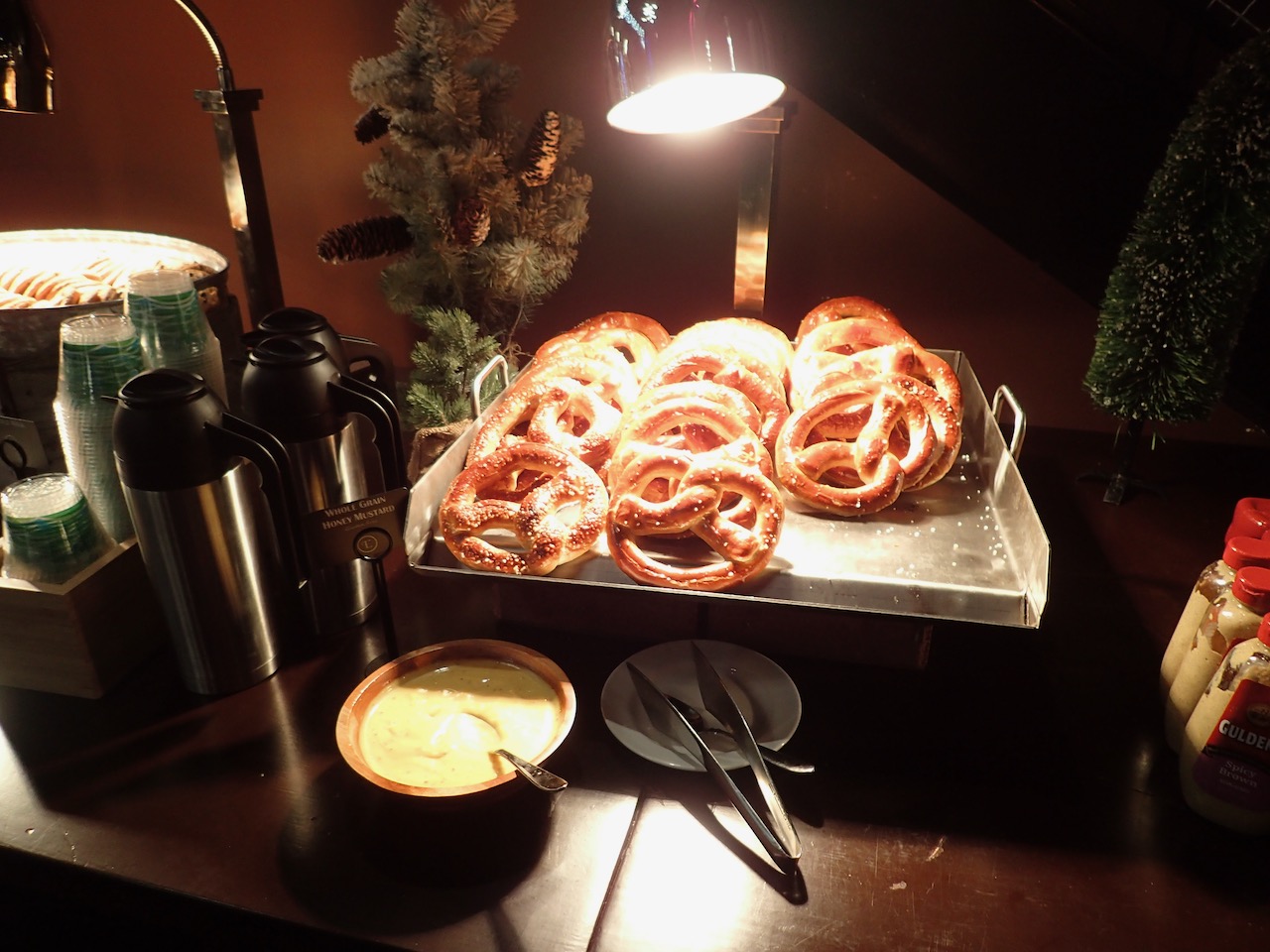 I loved the soft pretzels and honey mustard. 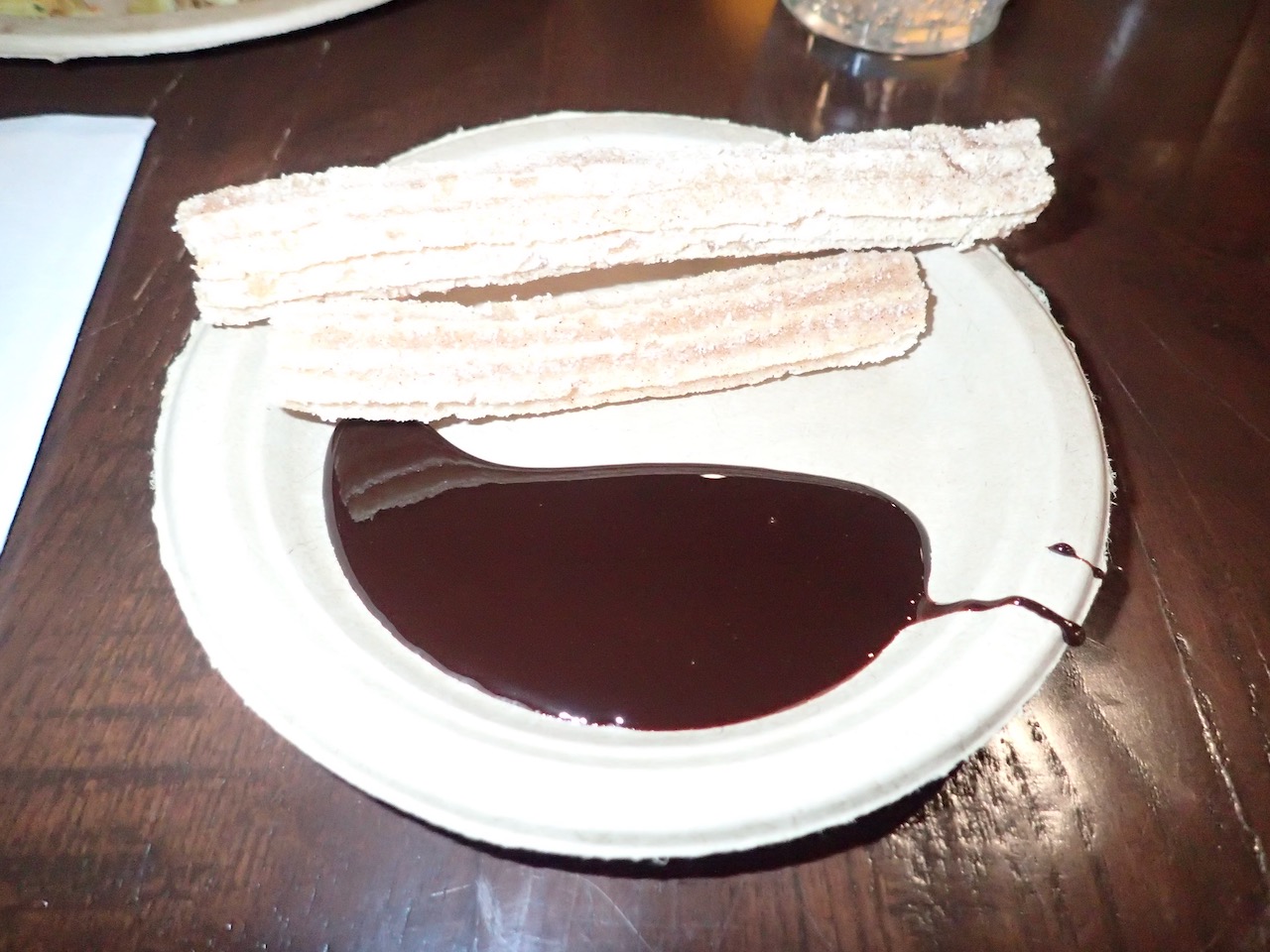 The best part was the churros and spiced chocolate fudge for dessert. Mik also enjoyed the cookies. 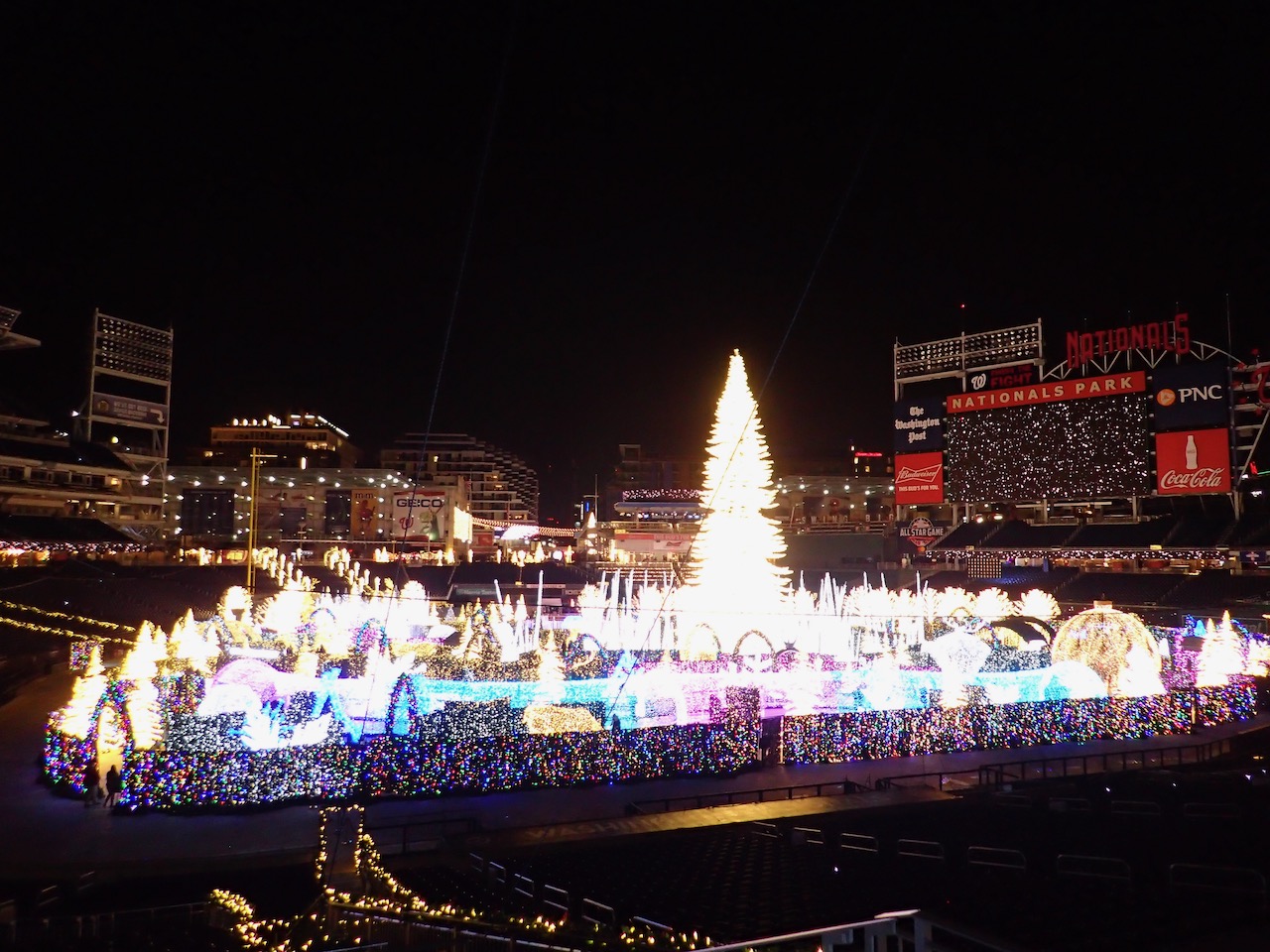 While we couldn't access the maze from the VIP access route as you have to take the steps down to the field, going out the door was a great place to view the maze as a whole. Signage in general wasn't great for finding the different parts of the event, but it was clear for the maze including the ADA access, which is via an elevator and a hallway same as is used for access the field level seats. 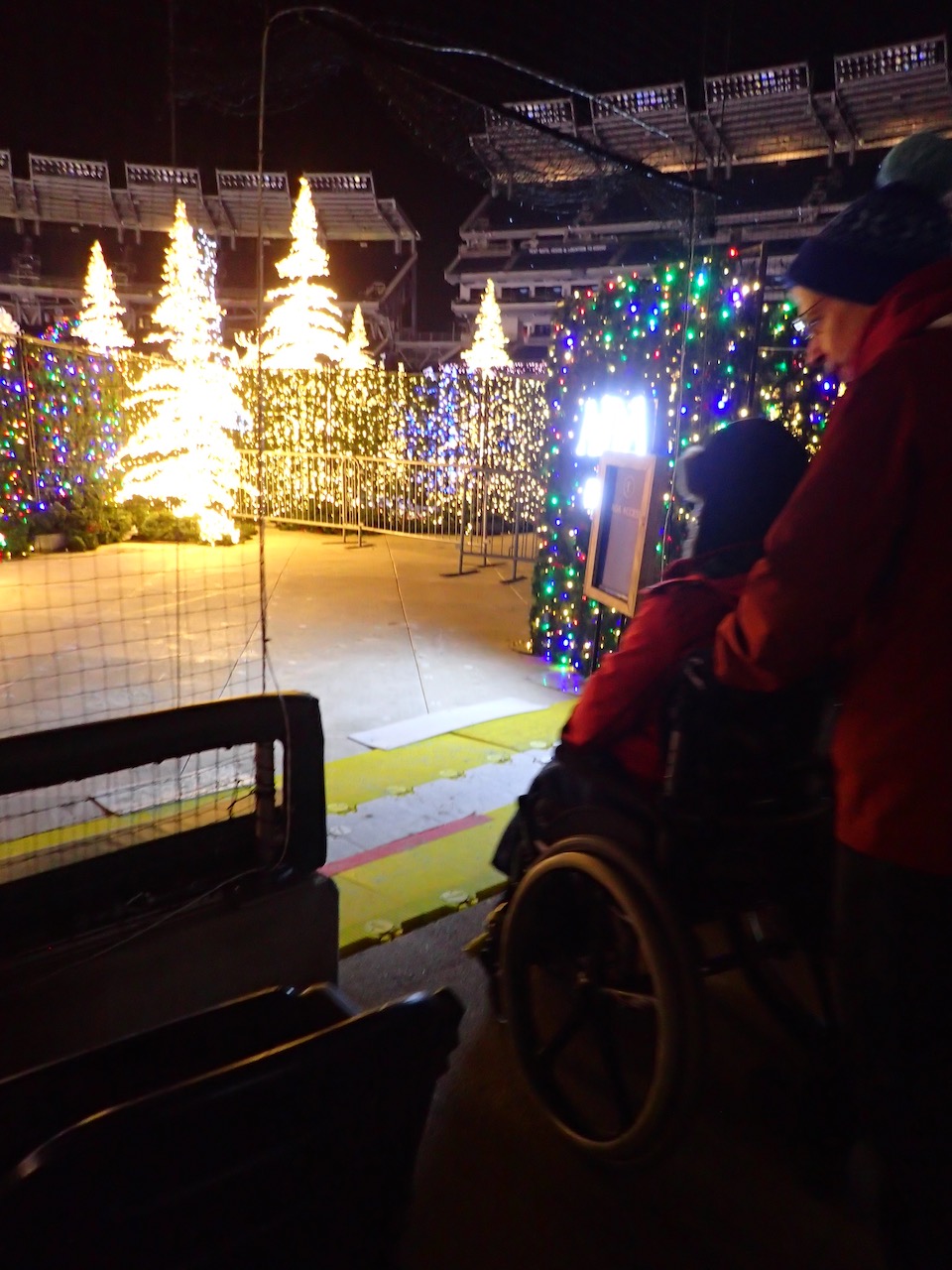 Once out on the field, the lack of signage again was a problem. The ADA entrance ended up being near what turned out to be the exit. When we asked the guy at the exit if it was the entrance, he said you can enter this way and we had to specifically ask what's the normal way to enter to find out to keep going and it's right around the corner. 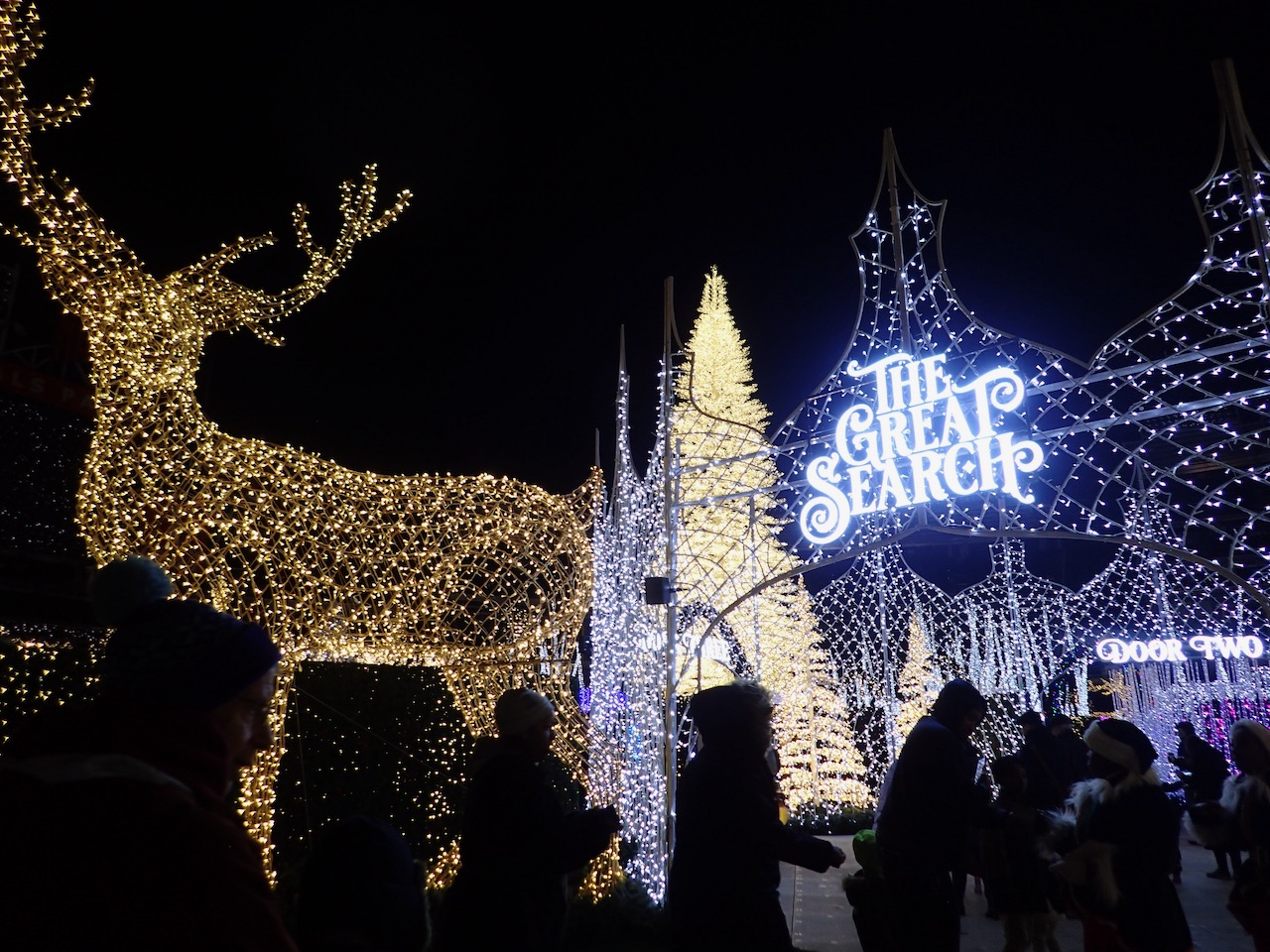 Entering from the exit really wouldn't matter as you just wander in the maze as you want, but you do need to go in the main entrance to get the postcard to scratch off the nine reindeer as you find them. 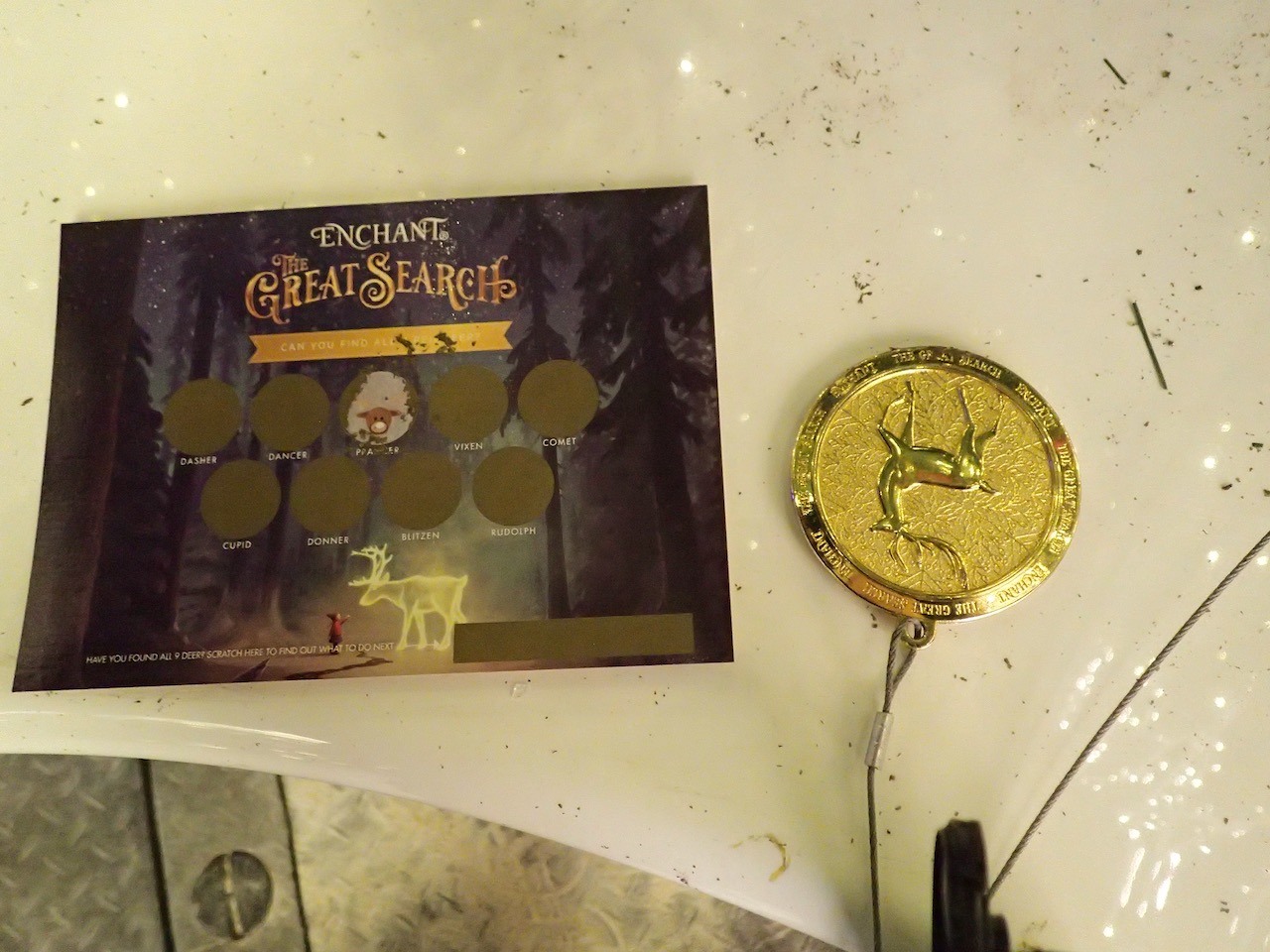 By each of the reindeer, there are tables with coins you can use to scratch off the reindeer. This includes low tables, which were probably designed with kids in mind, but also makes the coins accessible to use. 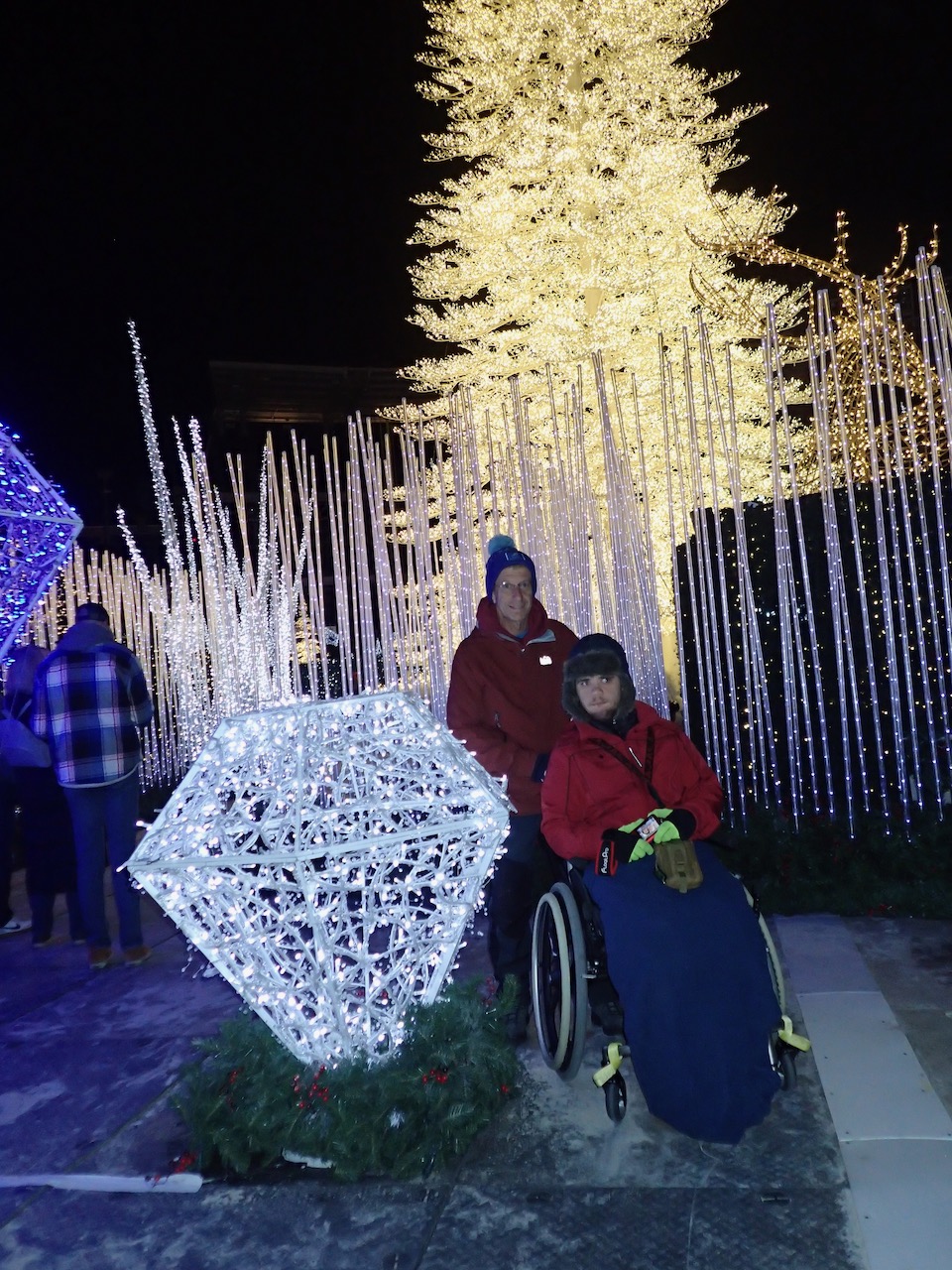 The main fun was finding the reindeer, but we also enjoyed the different lighted sculptures. 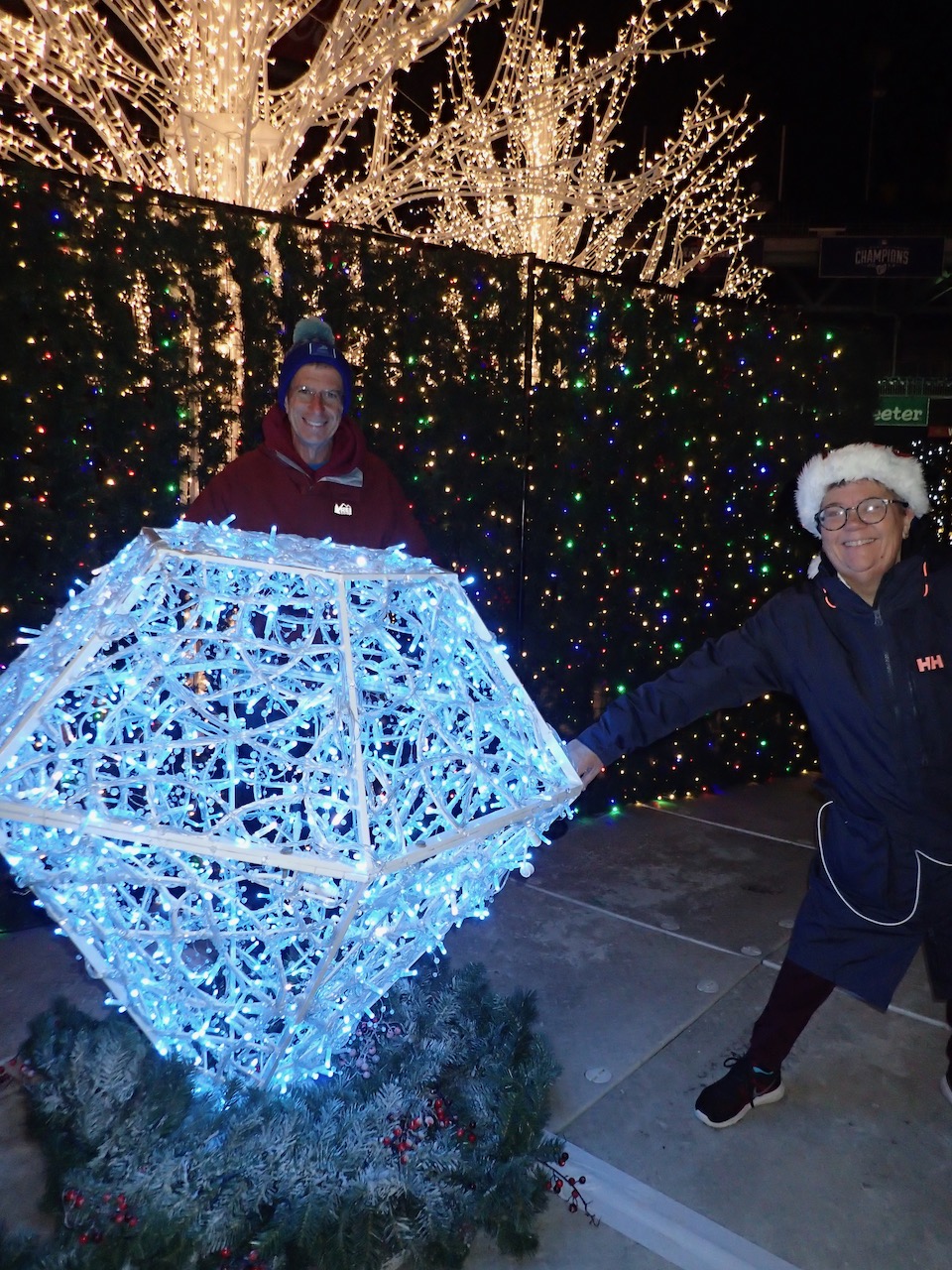 Mom pretended she was wearing this diamond. 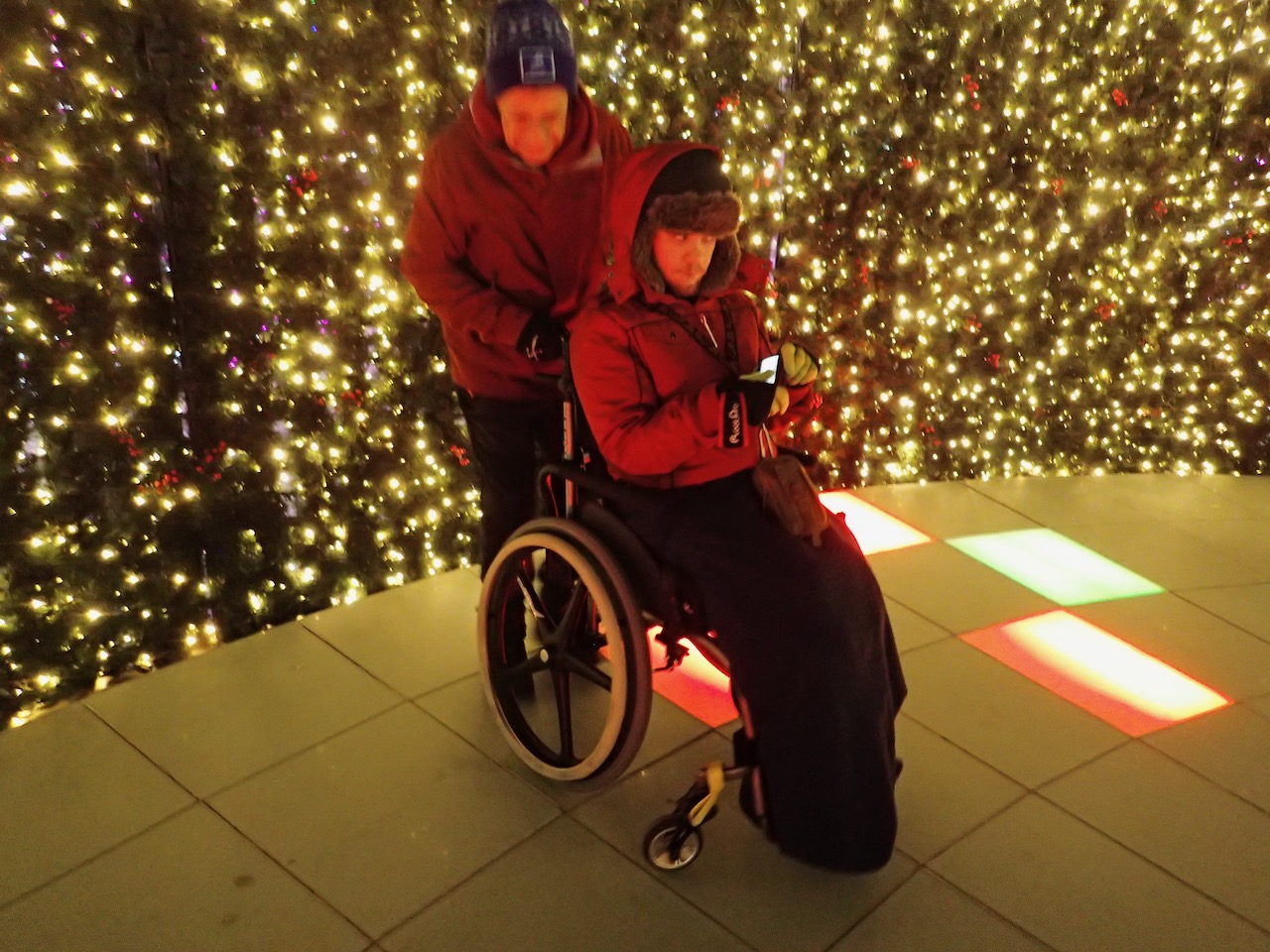 There was also an area with a raised platform that we're not entirely sure the purpose was, but maybe it was lighting up to the beat of music. Both ends were ramped, although the one side was rather steep and, of course, that's the side we used... 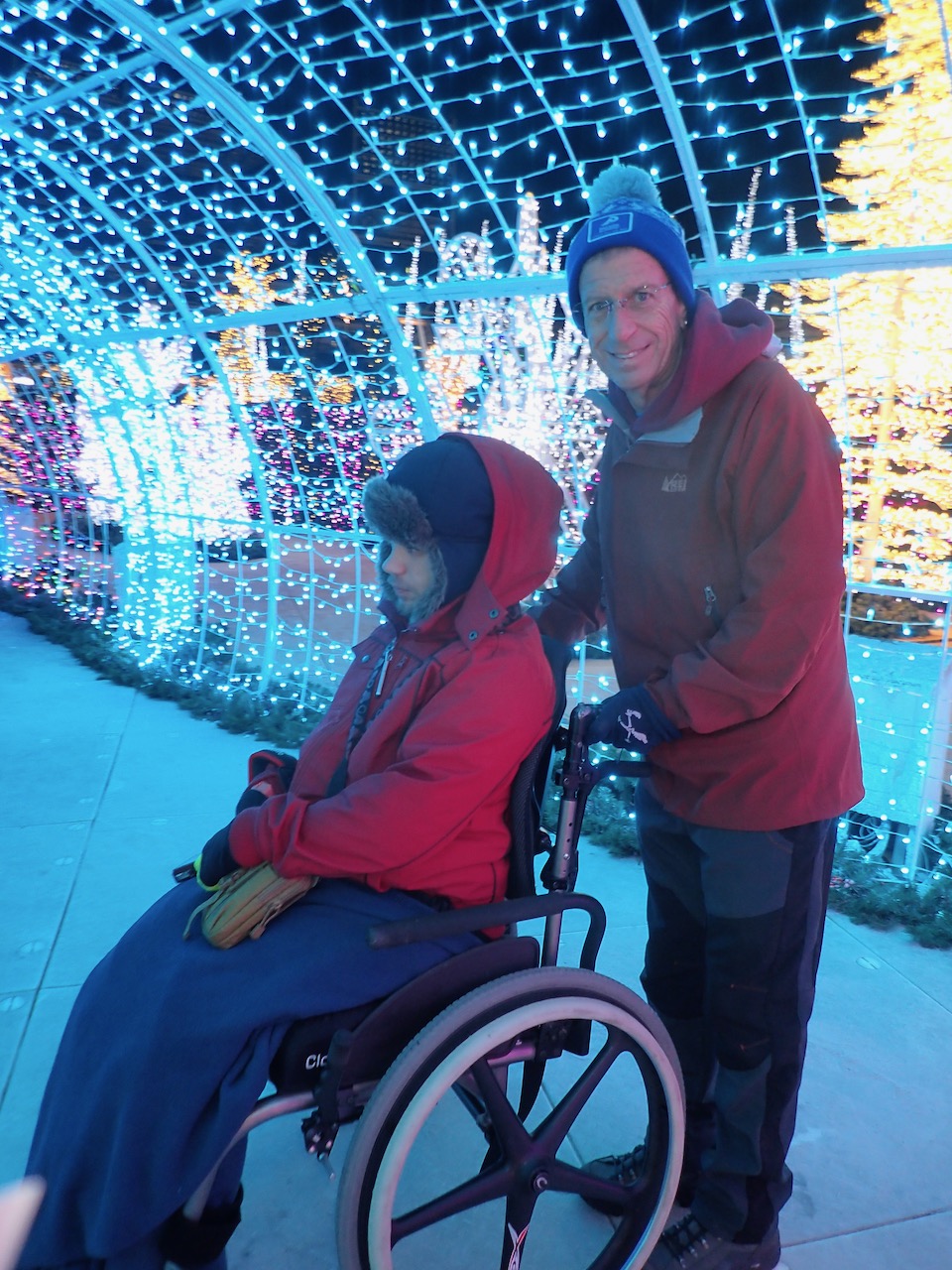 The lighted tunnel was fun to walk under, but Mik did not like when we used the side exits to go towards some of the reindeer. 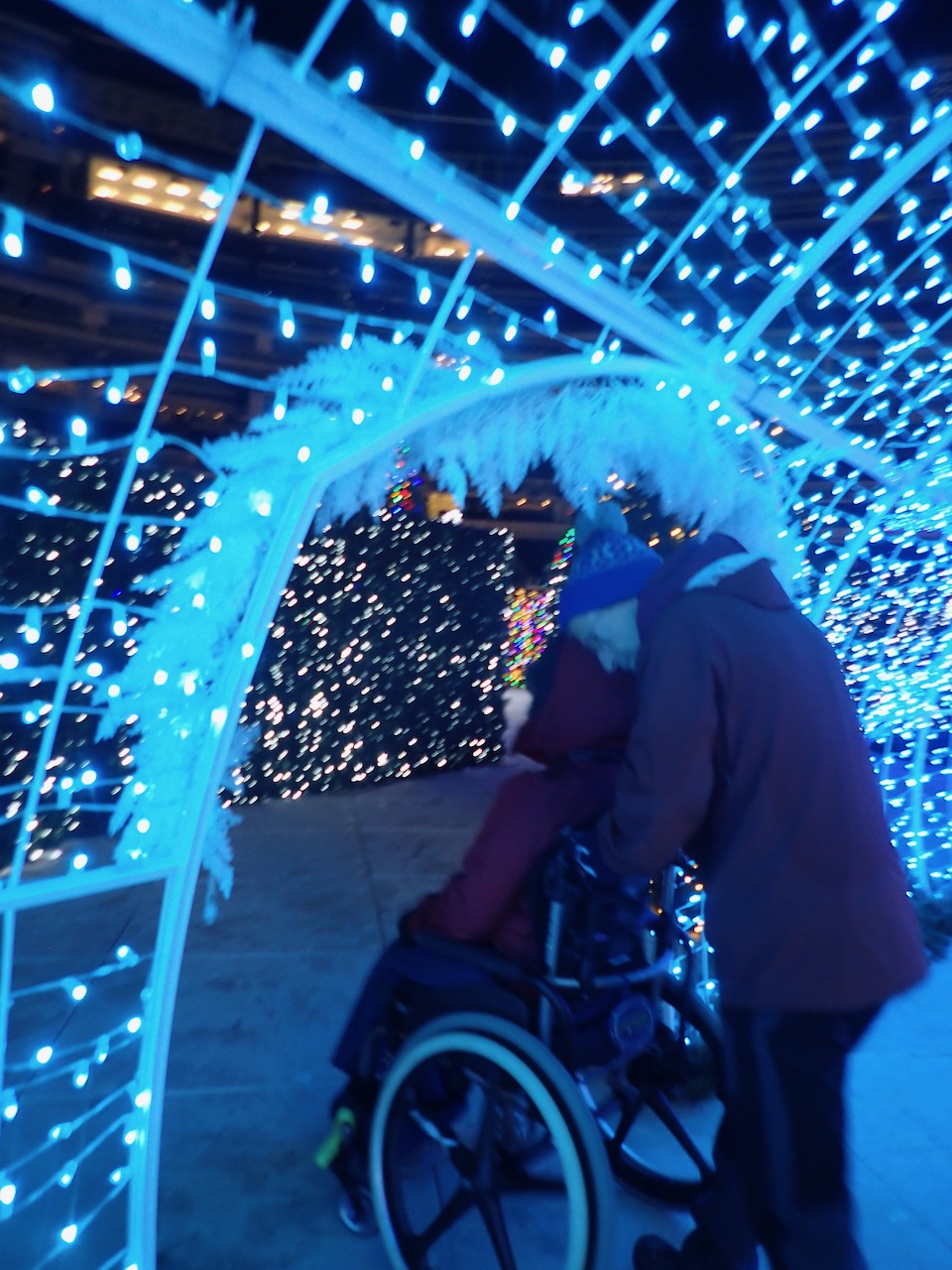 The side exits were still plenty tall enough for him to roll under and only Dad had to duck, but Mik felt like it was barely taller than him. 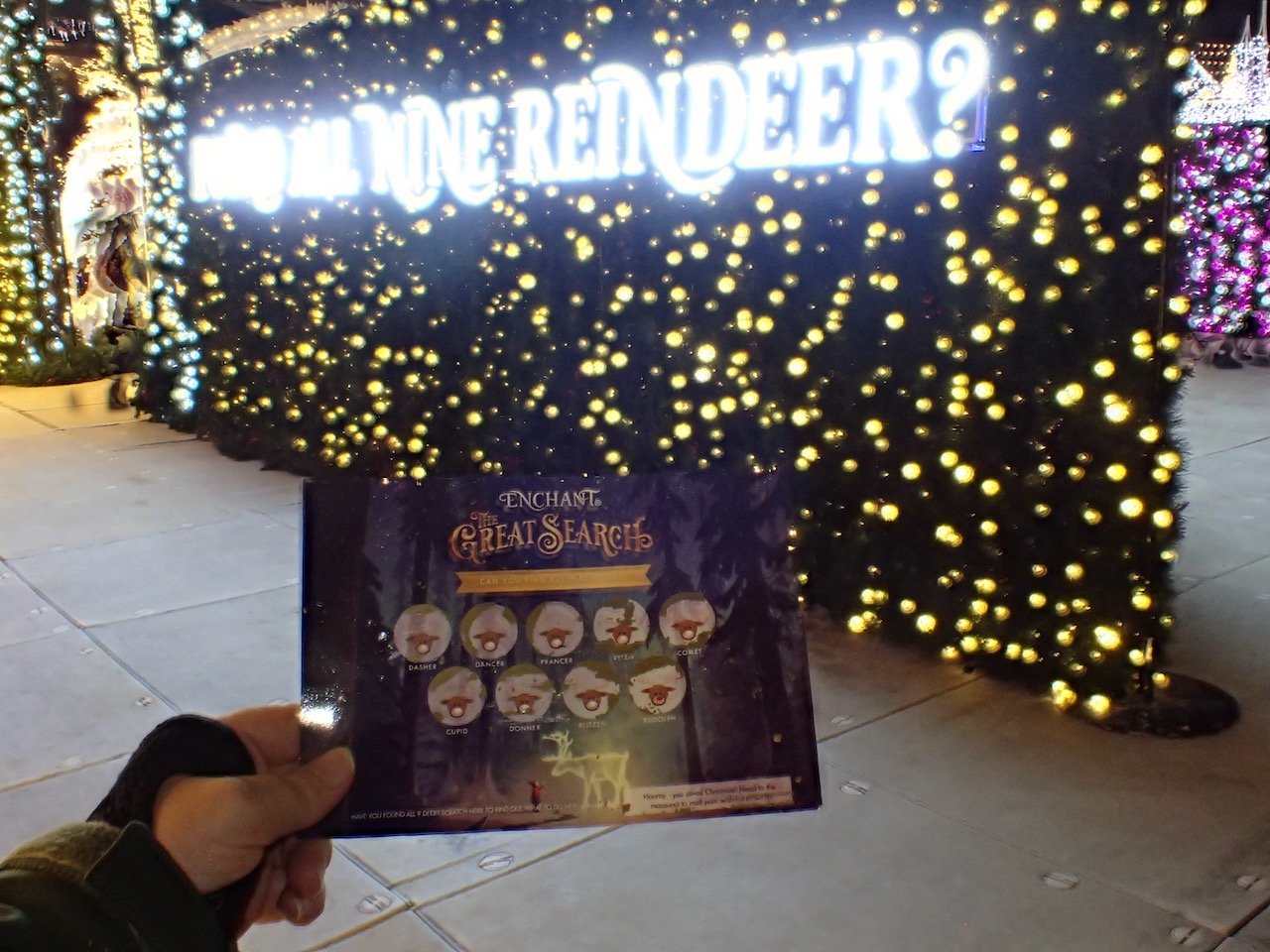 Why, yes, we did find them all! 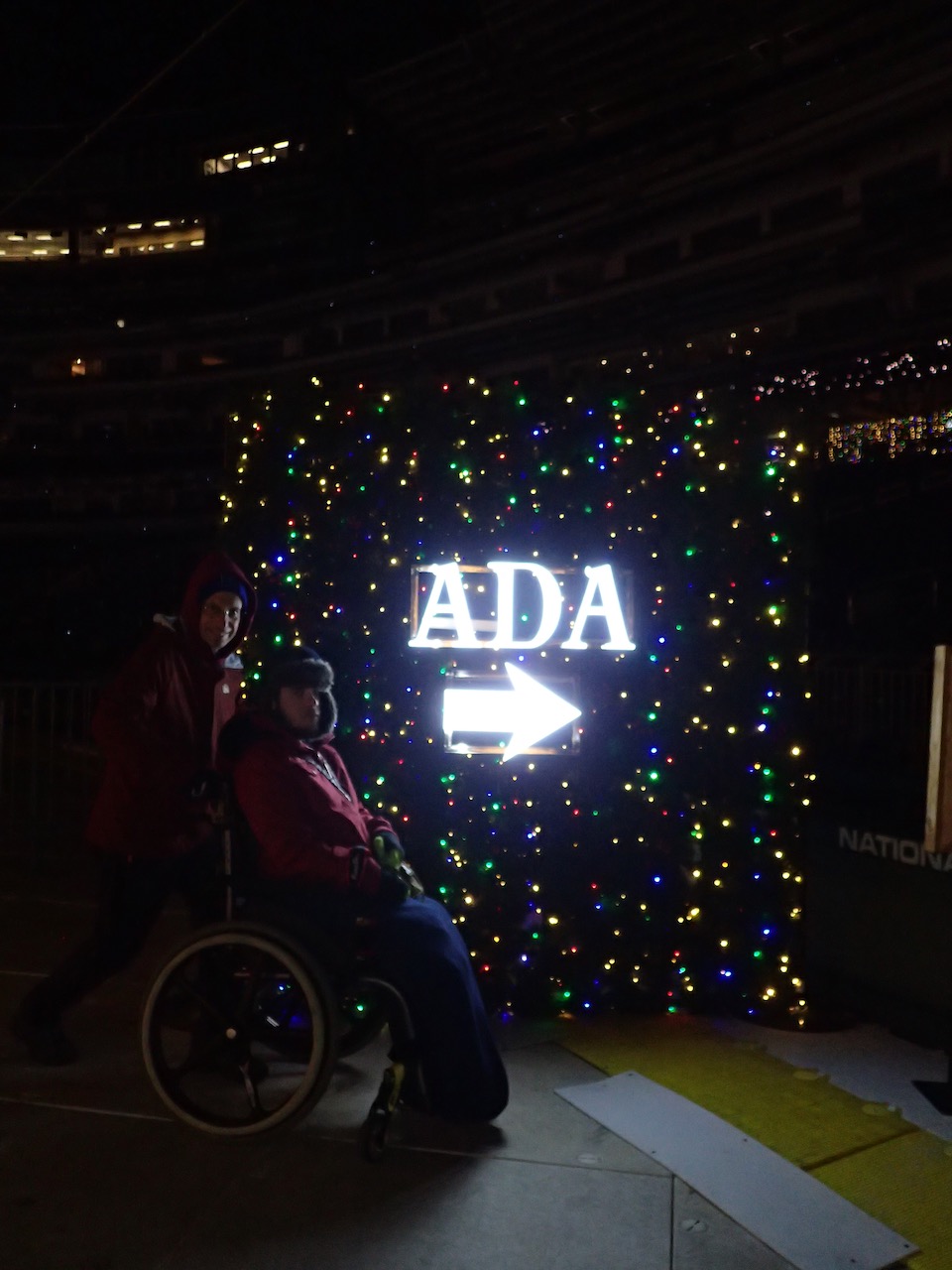 Mik and Dad liked that the ADA access back to the elevator was very easy to find when you exit the maze. 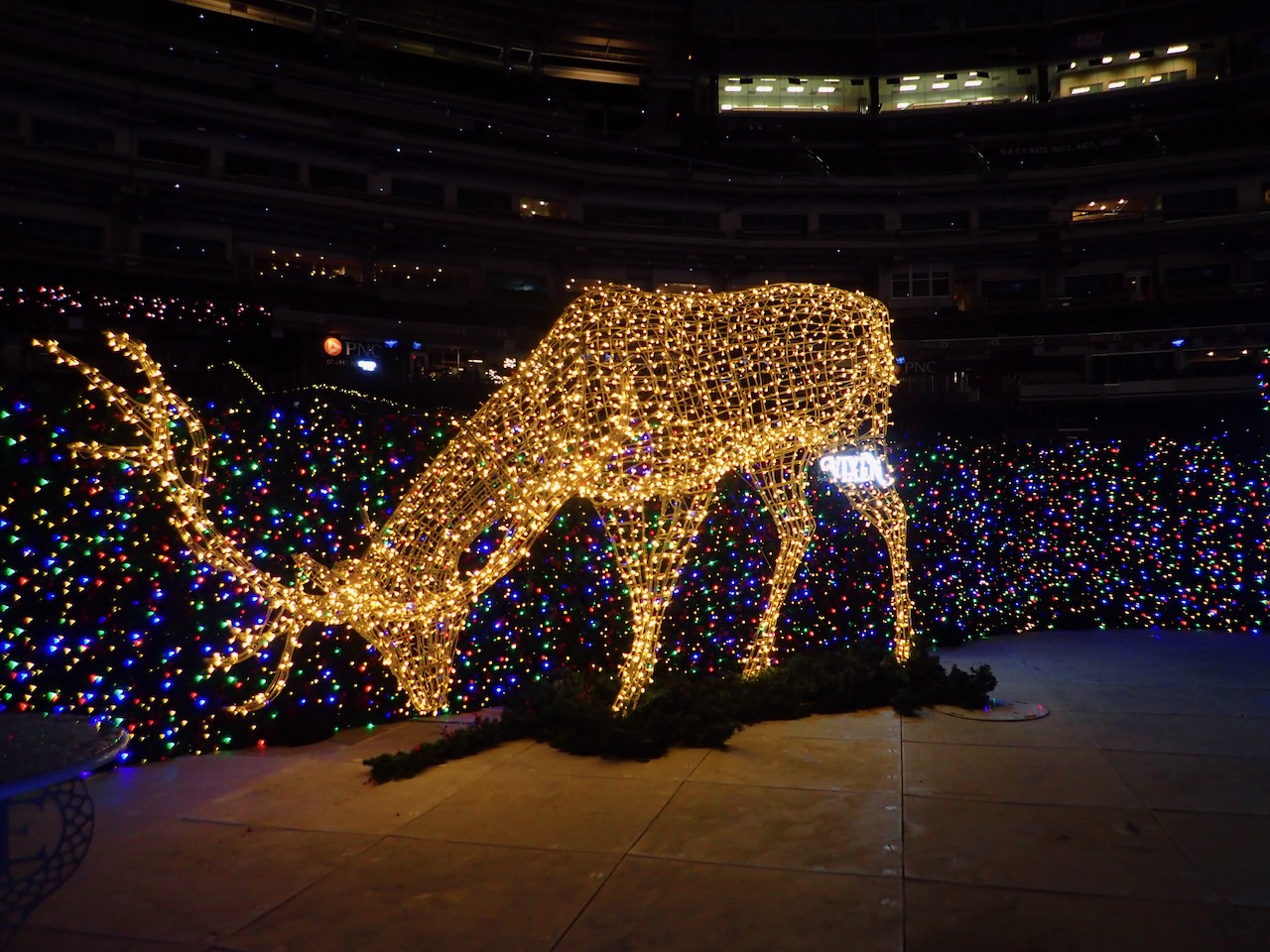 Mik had been hesitant to go to, especially with the cold weather, but overall it was a very fun family outing to celebrate Christmas early together. It did end up being cold, but he really enjoyed the buffet inside where it was warm and we also warmed up by going in the Team Store before walking home.